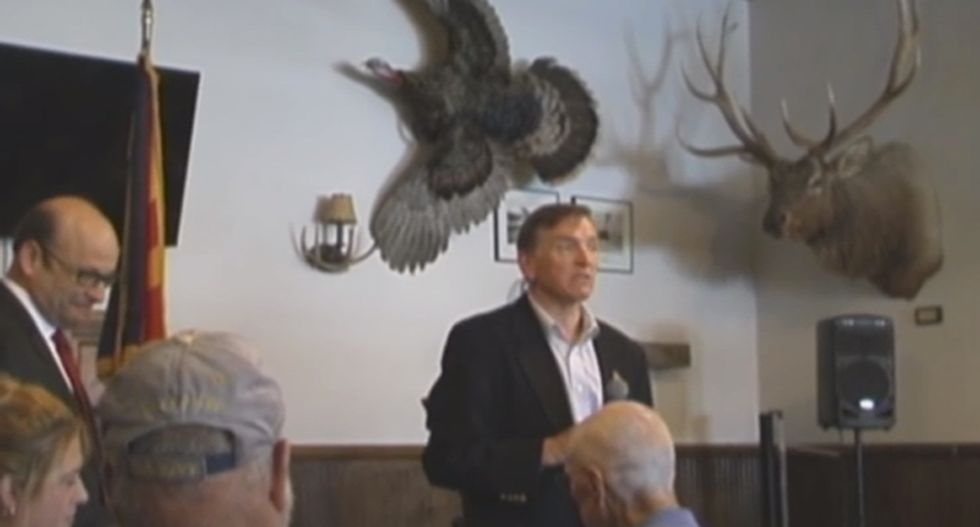 In a contentious back and forth with constituents at a public meeting in Kingman, Arizona, a Republican congressman tried to allay fears over so-called chemtrails only to have his explanations swatted away with one man yelling, "We don't need science!"

Arizona has become Ground Zero for conspiracy theorists who claim that the government or the "New World Order" is attempting to control the populace and the environment by spraying chemicals into the air from passing airplanes.

Rep. Paul Gosar (R) attended the meeting on Tuesday to listen to constituents express concerns on a variety of topics, but the meeting grew heated when the topic of chemtrails came up.

"My name is Al DiCicco, and my question is related to our environment here in Arizona," one man said while standing in the hall festooned with mounted animal heads." For the past several years we've been testing people's blood, hair follicles, rainwater, and soil..." at which point Gosar interrupted him and asked, "What group are you with?"

"I'm not in a group, you know what I mean. I've been involved in opposing geo-engineering projects above Arizona as well as elsewhere," the man explained. "We have a serious situation here, where we have submitted information to the Arizona Department of Environmental Quality whose own mission statement is to protect our environment, including our air, and, you're talking about granddkids? Yes, I have three kids and I have my own life."

With his voice rising, the man continued, "My body is filled with barium, aluminum, and strontium, and nobody is doing anything about it. That's why I'm here today. Because we want answers and we want something done instead of being placated and have people make fun of us about tin-foil hats. Well, go get your blood tested.  You'll throw your tin-foil hat away, as well as your jokes. This is a serious matter."

Indicating the audience, he said, "We all are aware that geo-engineering and solar radiation management is going on worldwide. My questions is: what are you going to do about it, and when?"

"We don't need science," DiCicco yelled from the back of the room stunning the congressman who replied, "Really?"

Admitting that he too "doesn't trust our government," Gosar admonished the crowd about blaming the United Nations, while pointing out that barium and uranium are "ambient" chemical elements already found in high concentrations in the Grand Canyon state.

After a woman interrupts him to say, "We're talking about what is being dispensed by aircraft," Gosar replies, "Well, there is nothing there."

As the woman attempts to explain, "There's covert operations..." Gosar screws up his face and says, "Yeah, come on."

While admitting that he has concerns, Gosar tells the crowd, "In some ways I have to start trusting the National Institute for Health," as the woman continues to shout, saying "we've all been studying it" along with "millions of people all around the world."

Watch the video below uploaded to YouTube by Gianluca Zanna: