'A conqueror and statesman': Russia unveils bust of Vladimir Putin as a Roman emperor 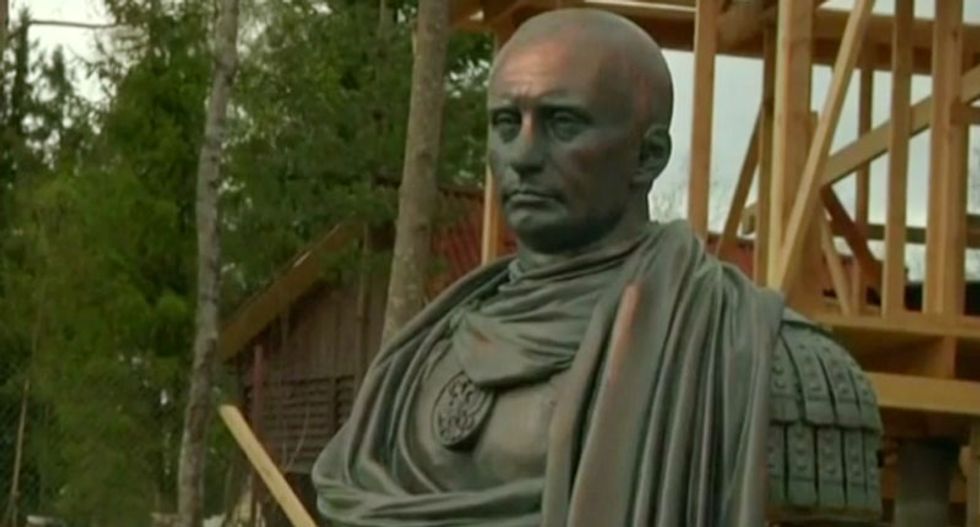 A group of supporters of Russian President Vladimir Putin on Sunday presented a bust of the strongman depicting him in the heroic guise of a Roman emperor.

"We wanted to immortalise Vladimir Putin as a conqueror and statesman who returned Crimea to Russia," said Andrei Polyakov, the head of a group of Cossacks outside the northwestern city of Saint Petersburg.

Cossacks trace their origins back to horsemen who guarded Tsarist Russia's borders and are fiercely loyal to the Kremlin.

The imitation-bronze bust measuring about 50 centimetres in which Putin is depicted in a breastplate and flowing toga was created by sculptor Pavel Greshnikov using an artificial resin.

"The image of a Roman emperor is one of wisdom," Polyakov told AFP, saying it represented "the historic role of Vladimir Putin, who succeeded in reuniting Russia and Crimea".

Russia's annexation of Crimea in March 2014 was condemned by Kiev and the West as an illegal land grab and sparked severe sanctions on Moscow but it has won Putin soaring approval ratings at home despite the economic consequences.

The bust stands on land owned by a Cossack association around 20 kilometres (12 miles) from Saint Petersburg.

At an unveiling ceremony on Saturday, Cossacks in traditional dress of kaftans and fleece hats sang the Russian anthem.

Putin has publicly repudiated attempts to create a personality cult, although his portraits have become ubiquitous in the offices of government officials, as well as proliferating on T-shirts, fridge magnets and stickers on sale commercially.

Putin makes no secret of his imperial mindset, describing the breakup of the Soviet Union as one of history's great tragedies.

On Saturday, the 62-year-old leader underlined his physical prowess by playing in a gala ice hockey match in the Black Sea city of Sochi and scoring 8 goals for his side,

Putin was playing in a side called "NHL Stars" which also included defence minster Sergei Shoigu and former hockey stars including Pavel Bure.

It finally routed its opponents -- an amateur team of politicans and businessmen -- with a score of 18-2.

As man of the match, Shoigu was presented with a prize -- a holiday in Crimea.