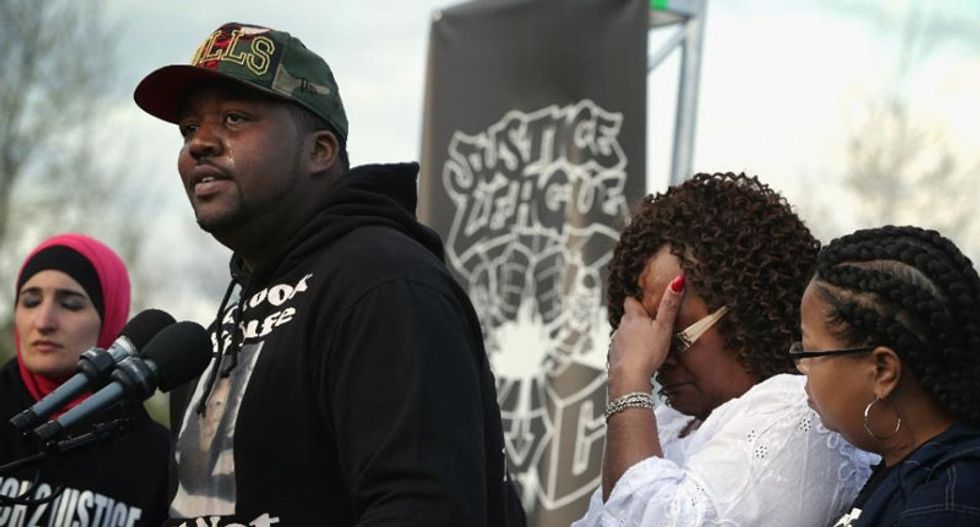 Martinez Sutton (2nd L) speaks about the shooting death of his sister Rekia Boyd by Chicago police detective Dante Servin during a rally to mark the finishing of March2Justice April 21, 2015 at the West Lawn of the US Capitol in Washington, DC (AFP Photo/Alex Wong)

What do you mean he's not guilty?" With tears streaming down his face, Martinez Sutton described the moment a Chicago judge set free the policeman who killed his sister.

"My sister was innocent, so why isn't anybody paying for her death?" Sutton asked on the sidelines of a UN review of the US rights record, heavily focused on police brutality and profiling of African Americans.

Rekia Boyd, an unarmed black 22-year-old, was fatally shot in the back of the head by white police officer Dante Servin in Chicago in March 2012.

"She was my baby sister... She was always smiling, always joking. He took a beautiful soul off this earth," Sutton told reporters in Geneva with a sob, standing up to show off his black t-shirt with a picture of a pretty woman with the words "Injustice System" scrawled across her face.

While race was not a major element in the trial, it hung heavily over the proceedings amid a string of scandals surrounding police killings of unarmed black men.

A US delegation was taken to task before the UN Human Rights Council Monday over Washington's record on reining in excessive force by police, especially against African Americans.

On the day she was killed, Boyd and some friends had been walking to a store in west Chicago, when the officer, in plain clothes and in a civilian vehicle, "had words" with two of the guys in the group, Sutton said.

The group had turned into an alley, and according to Servin's attorney, one of the four pulled out an object -- which turned out to be a cellphone -- from his waistband and pointed it at the officer.

The officer has claimed he felt threatened when he fired shots at the group as they were walking away from him.

Every time there is one of these suspicious police shootings, Sutton said, the officer claims a suspect "had a gun, or my life was in danger."

"Those two excuses in the United States gives you the right to shoot somebody," he lamented.

Servin was acquitted of involuntary manslaughter last month on a strange legal technicality, in which the judge said the prosecutor had failed to prove the officer had acted recklessly, hinting he should have been charged with murder instead.

"He said since that wasn't the case, not guilty on all charges," said Sutton, 32, recalling his incredulity upon hearing his sister's killer would walk free.

He said he shouted in the courtroom: "I don't get it. I don't understand. This is crazy," and had been told by the judge to "sit down and shut up".

He described the atmosphere in the courthouse, with German shepherd dogs everywhere and more than two dozen police officers lining the walls of the courtroom, as the judge instructed the family he would tolerate no exhibits of emotion.

"It felt like I lived in the 1960s," Sutton said, adding he felt his family's treatment had been "inhumane... And a lot of it is based on the colour of our skin."

"I will never be able to see my sister again, and yet he gets to go home to his family, to his son, wife, and gets to enjoy life," he said.

Servin cannot be retried for Boyd's murder, and Sutton said he did not expect to see justice in the case.

"I don’t expect them to do anything, because, let's be real, It's been going on for years, and what has been done?" he said.

A smiling Queen Elizabeth II attended a Platinum Jubilee celebration at Windsor on Sunday, days after ill health and old age forced her to pull out of the opening of the UK parliament for the first time in nearly 60 years.

The 96-year-old monarch used a walking stick to make her way to the royal box at the show, entitled "A Gallop Through History", near her Windsor Castle home west of London.

Skeptics say that far from helping save the planet, electric cars are a liberal pipe-dream whose environmental benefits are exaggerated.

But even if there is no such thing as an all-green car, studies show that battery-powered ones cause fewer harmful greenhouse gas overall than their petrol-driven ancestors.

When it comes to reproductive care, Mississippi has a dual distinction. The state spawned the law that likely will lead to the Supreme Court striking down Roe v. Wade. It is also unique among Deep South states for doing the least to provide health care coverage to low-income people who have given birth.