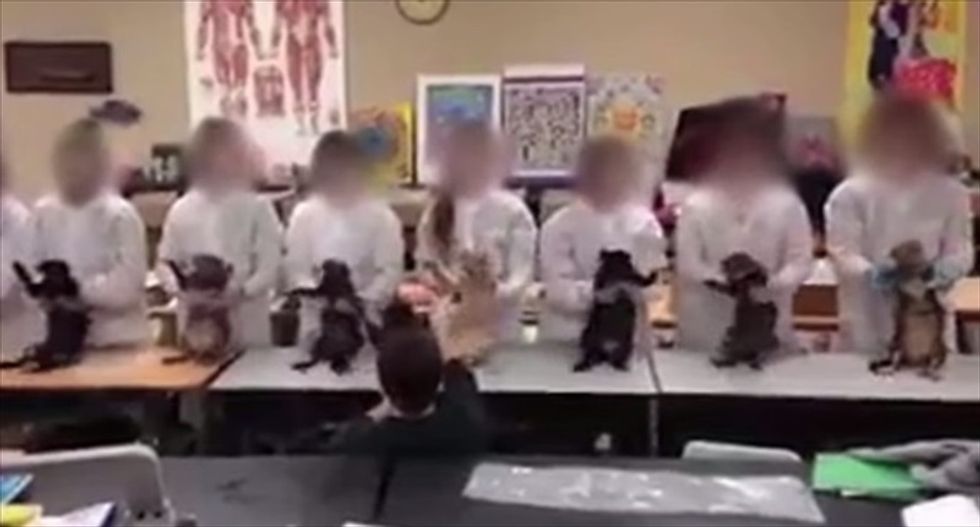 Students at an Oklahoma City high school use dead cats in a video set to the 'Meow Mix' tune. [YouTube]

A top charter school in Oklahoma City is under fire after an animal advocacy group released footage of nine students making a "dance" video with dead cats.

According to the Daily Mail, the video shows eight of the students at Harding Charter Preparatory High School bouncing the cats on their desks to the tune of the Meow Mix ad jingle, while another student is seen holding another cat as if it were a "conductor."

At the end of the video, one of the students is seen holding up a sign. The Mail reported that the sign said, "Piccolo and the Pussycats," a possible reference to a science teacher at the school.

People for the Ethical Treatment of Animals posted the footage online, saying the cats were scheduled to be dissected in a biology class. The group has started an online petition calling for the school to investigate the incident.

"The video of the choreographed display was posted on social media, and the students' teacher was even tagged in the post," the group stated. "Students learn faster and better by using non-animal methods such as interactive software programs, and with these modern tools, they don't learn to treat or think of animals as equipment to be used and discarded."

A spokesperson for the group told the Mail that it attempted to contact the school numerous times, to no avail.

"Cats used for dissection are often lost or stolen animal companions," Justin Goodman said. "But in classrooms like this one, students are taught that they're props and inanimate laboratory tools to be mocked, used, and discarded."

The school states on its website that it U.S. News and World Report ranked Harding Charter as the top high school in Oklahoma in 2012. However, it is not listed in the magazine's state rankings for this year.

Watch the footage, as posted online by PETA, below.