Alabama lawmaker: My bill protects kids from learning 'they came from a monkey' 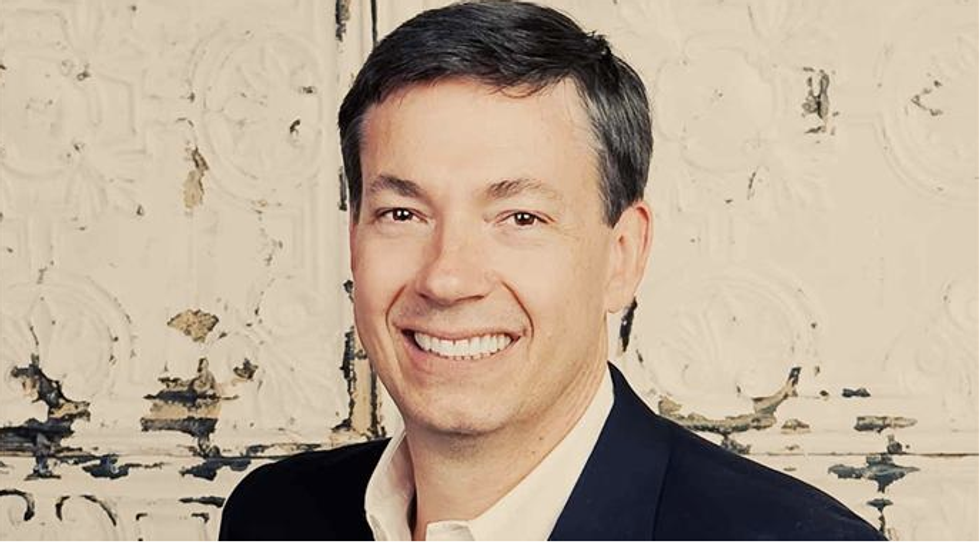 On April 30, 2015, an Alabama Republican introduced legislation to allow the state's public school teachers to substitute lessons in the assigned science curriculum with religious teachings.

The bill's sponsor is Mack Butler, who represents the interests of Alabama's 30th District at the state Capitol. Formally titled H.B. 592, the bill would see approved science surrounding "biological evolution, the chemical origins of life, and human cloning" subject to religious scrutiny by teachers in Alabama's public schools.

Butler is now squarely in the sights of free speech and science policy advocates nationwide.

"This is a thinly-veiled attempt to open the door to religious fanatics who don't believe in evolution, climate change or other scientifically-based teaching in our schools," Susan Watson, executive director of the ACLU of Alabama, tells AL.com. "It also opens Alabama to costly litigation that it just cannot afford."

The National Center for Science Education states on its website that, if enacted, Butler's proposed legislation would "undermine the integrity of science education in the state by encouraging science teachers with idiosyncratic opinions to teach whatever anything they pleased and prevent responsible educational authorities from intervening."

AL.com notes similar legislation has been passed in other states before. The so-called "monkey bill" passed in Tennessee in 2012; Louisiana also has a similar law.

Butler's website details how, with an associate's degree in electrical engineering technology, an enterprising man from humble beginners came to engender enough trust among the Alabama electorate to get voted into state-level office.

"Ever the entrepreneur," Butler's official bio reads, "Mack began his business career at the age of 11 as a 'paper boy' for the Gadsden Times and was assigned the prestigious and large downtown route where he became acquainted with many of the city's leading citizens."

A concerned father, Butler later got involved with the local school board. Then-Governor Bob Riley subsequently appointed Butler to the Alabama Public Library Executive Board and the Alabama Textbook Committee.

Butler has his eye on national politics, too. "He was an alternate delegate to the National Republican Convention in 2004," according to Butler's website. "His family was selected by CNBC for coverage of a family's complete day during that time. The program aired nationally and gave great recognition to the Butler family and to the Republicans. In 2008, Mack was elected as a delegate to the national convention."

And after all that, Butler decided to become a volunteer cop.

The Alabama legislator became a "reserve deputy in 2006," says Butler's biography. "This led to further interest in that field and in 2009 he graduated with honors from Jefferson County Sheriffs Academy. He is now an APOST certified law enforcement officer with full arrest powers... Serving whenever he is needed during weekends and special events."

The lawmaker wrote on Facebook that his new bill would “encourage debate if a student has a problem learning he came from a monkey rather than an intelligent design!” See screenshots of his Facebook posts below: 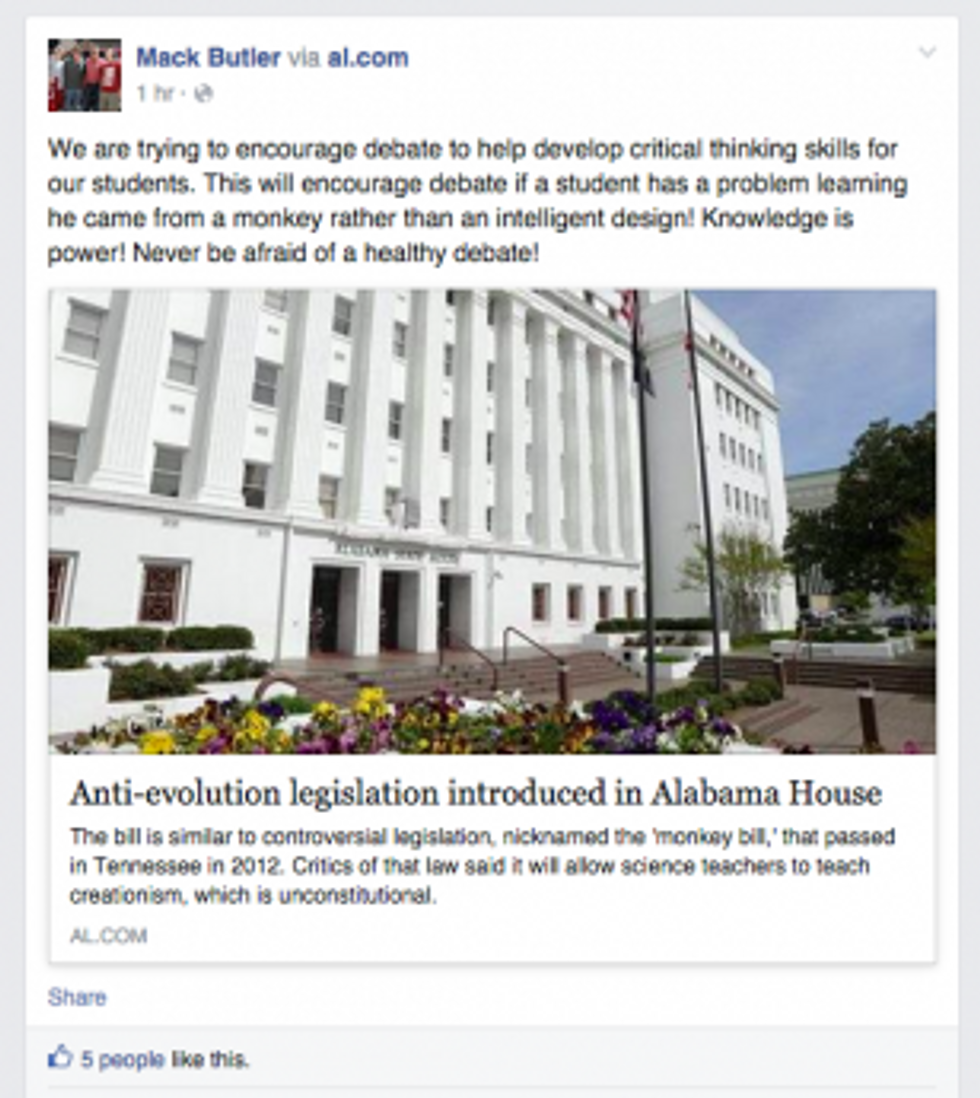 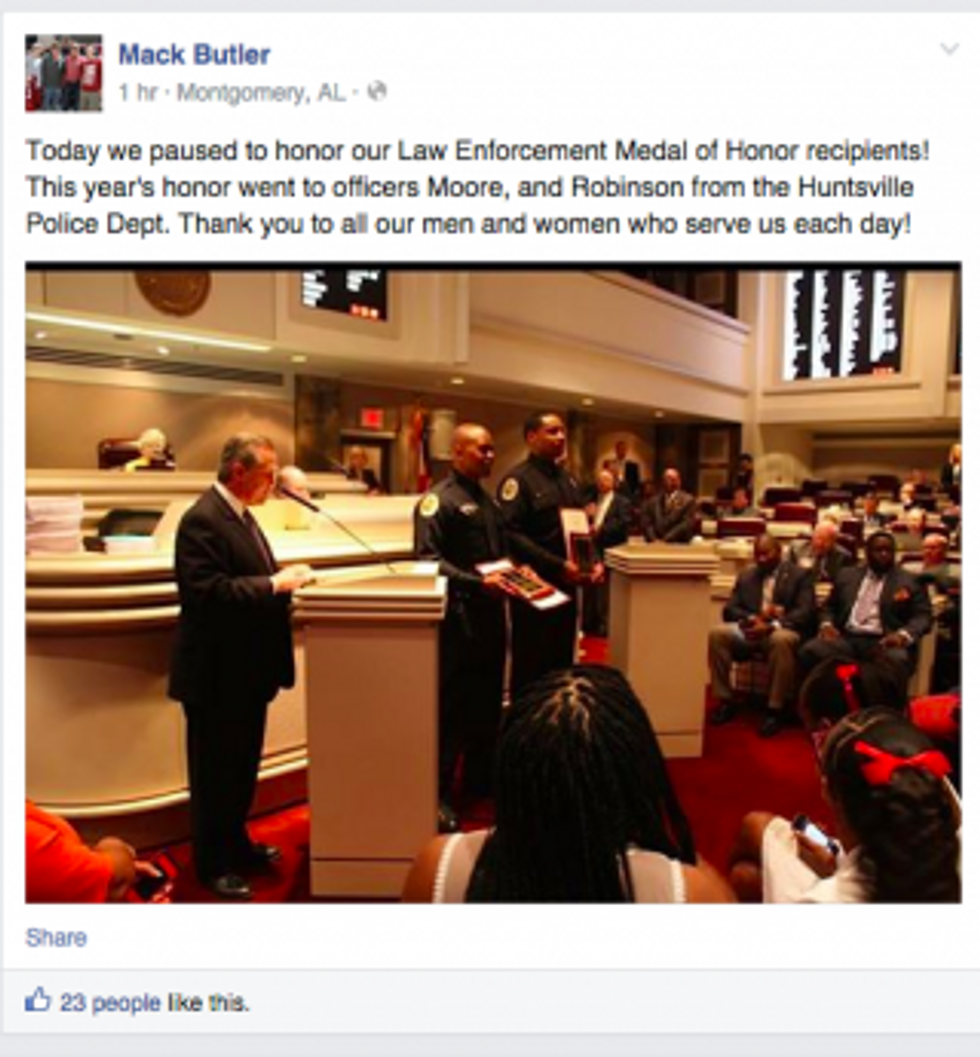 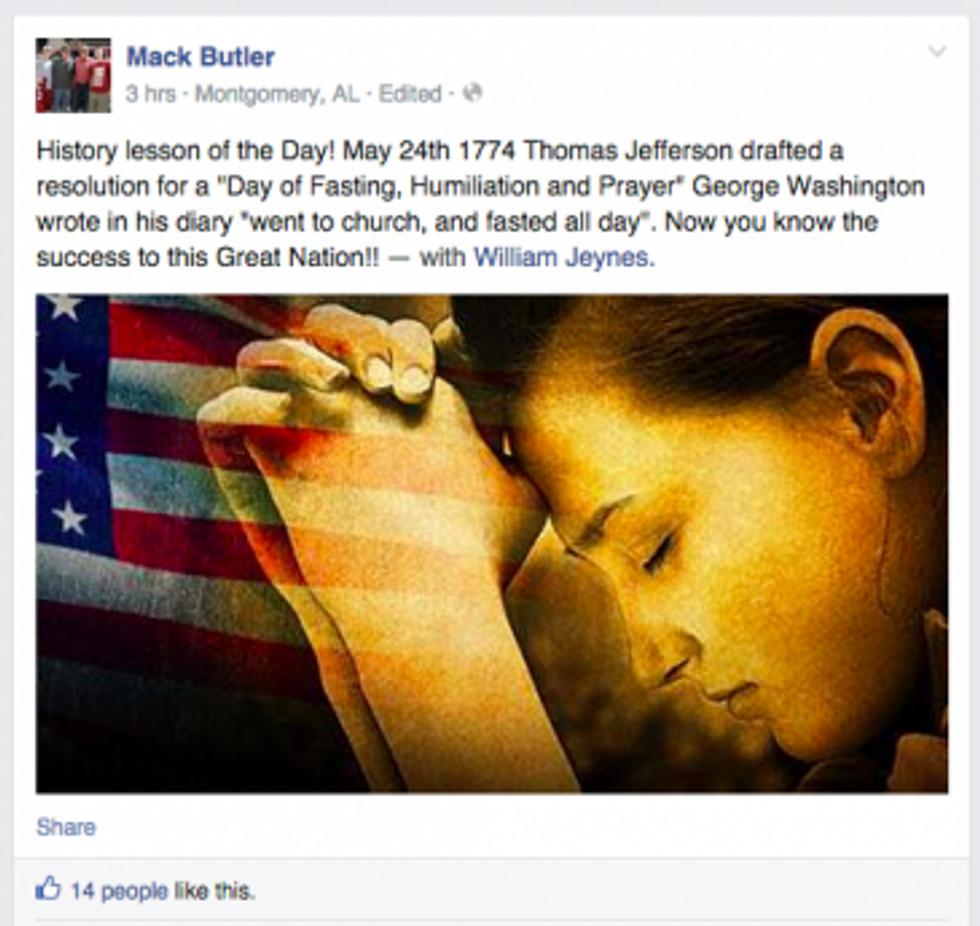 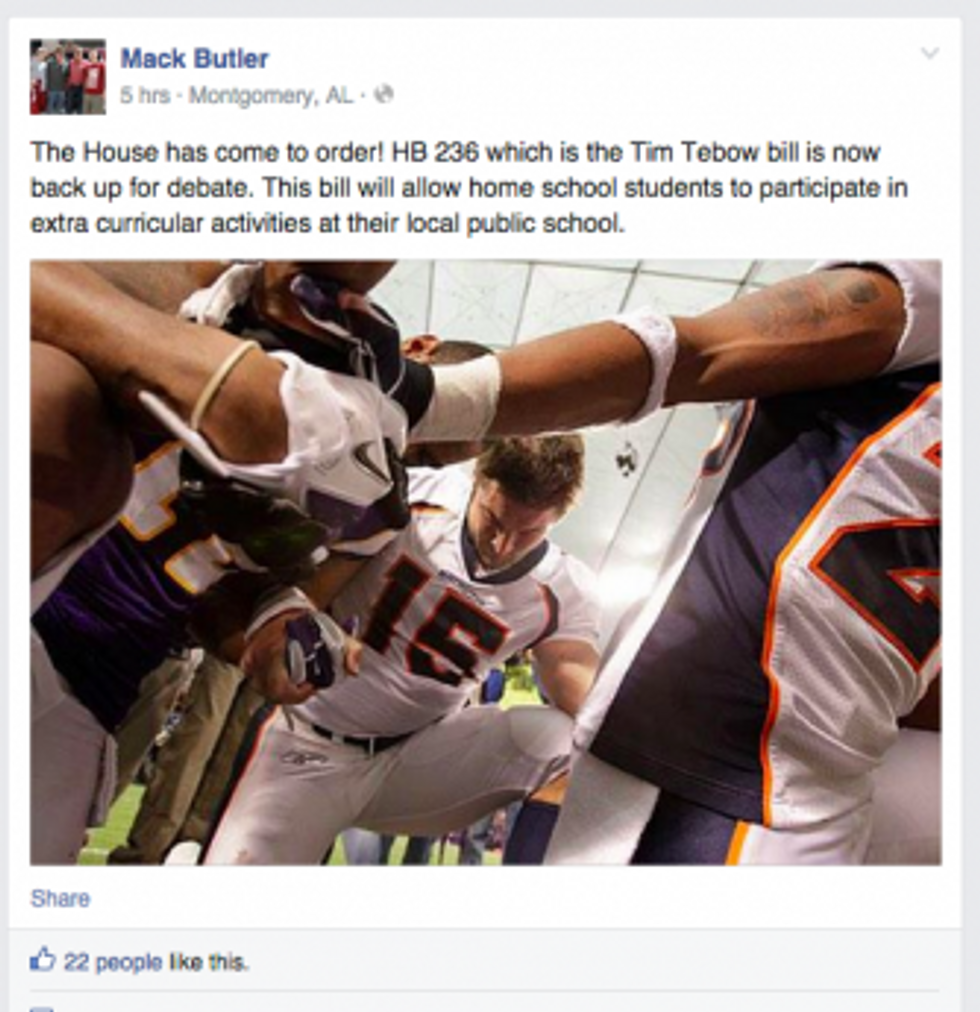 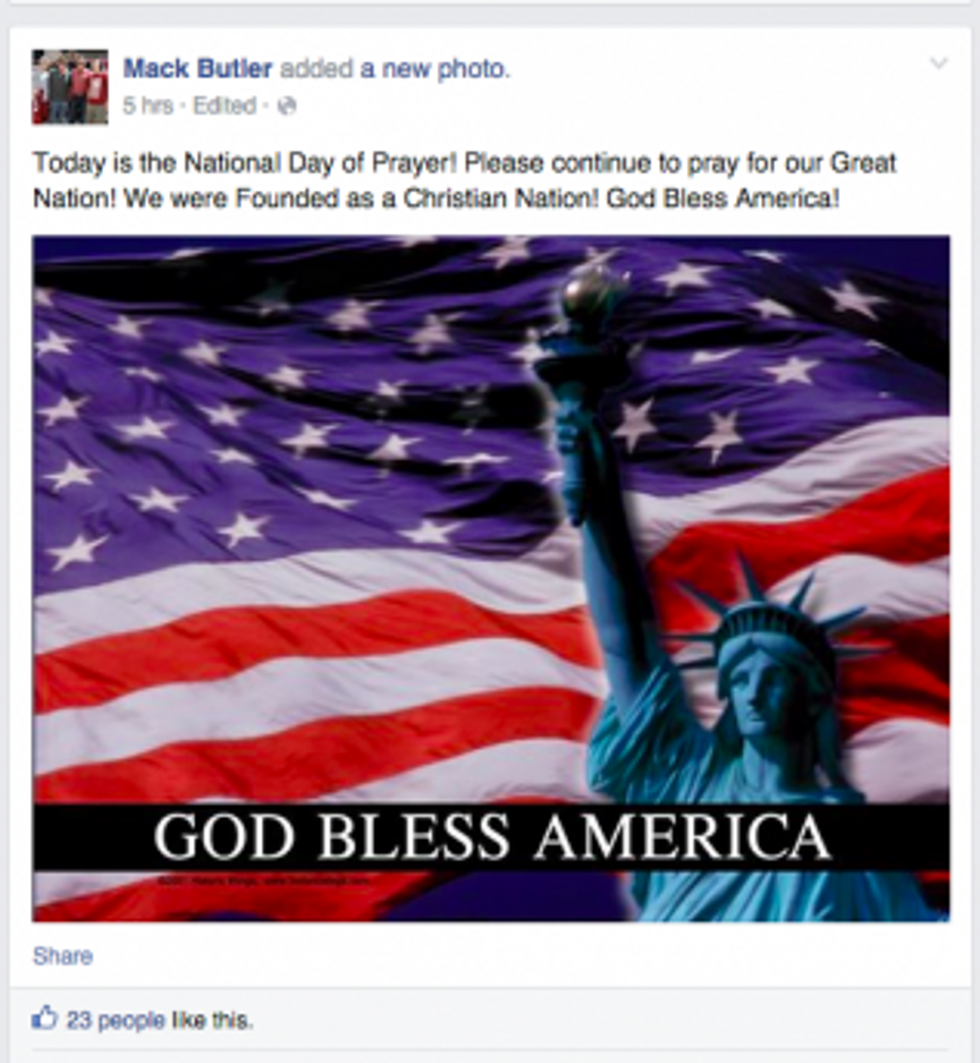 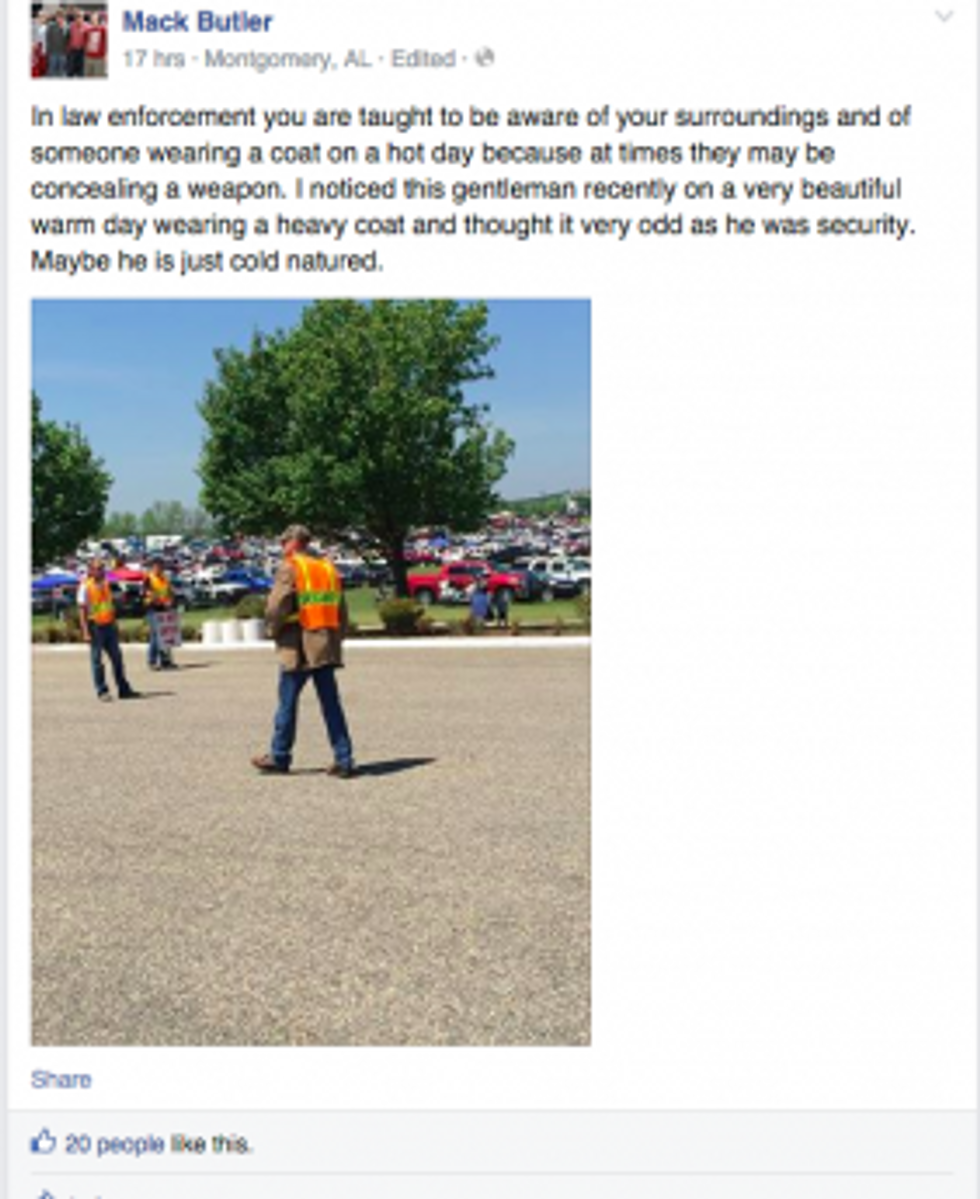 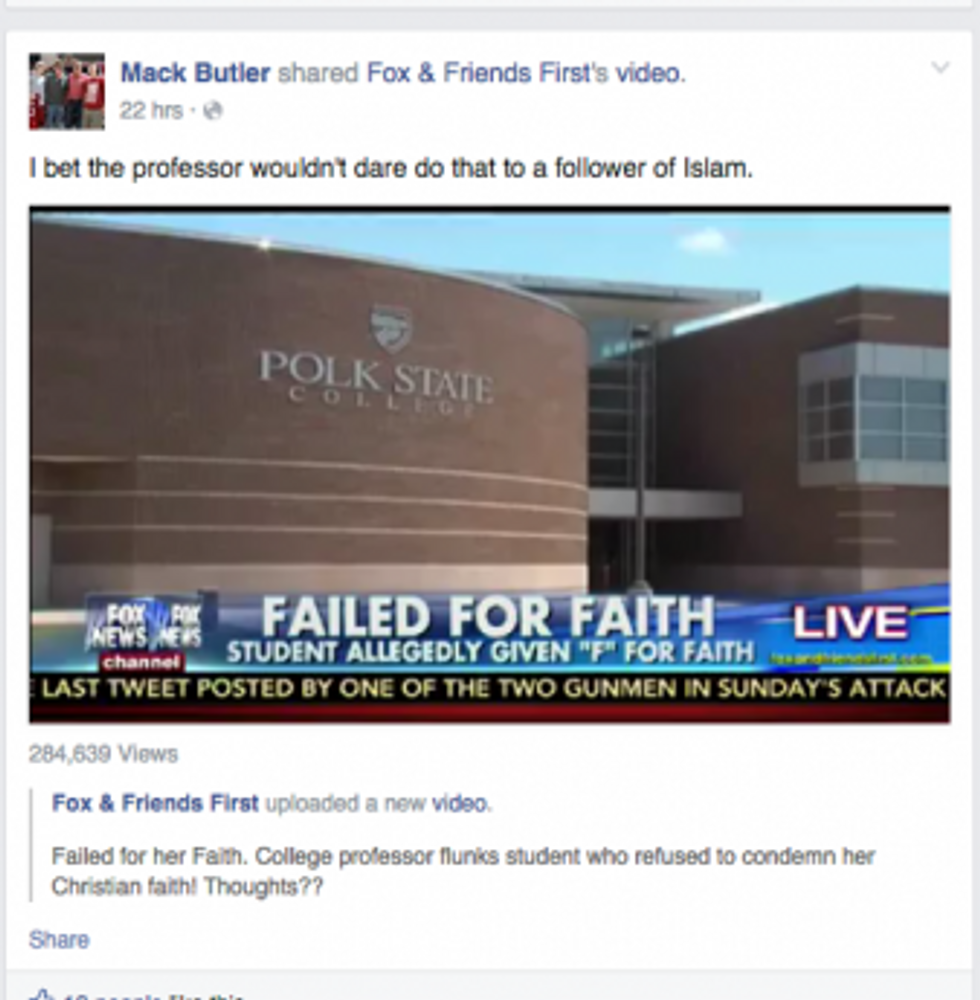