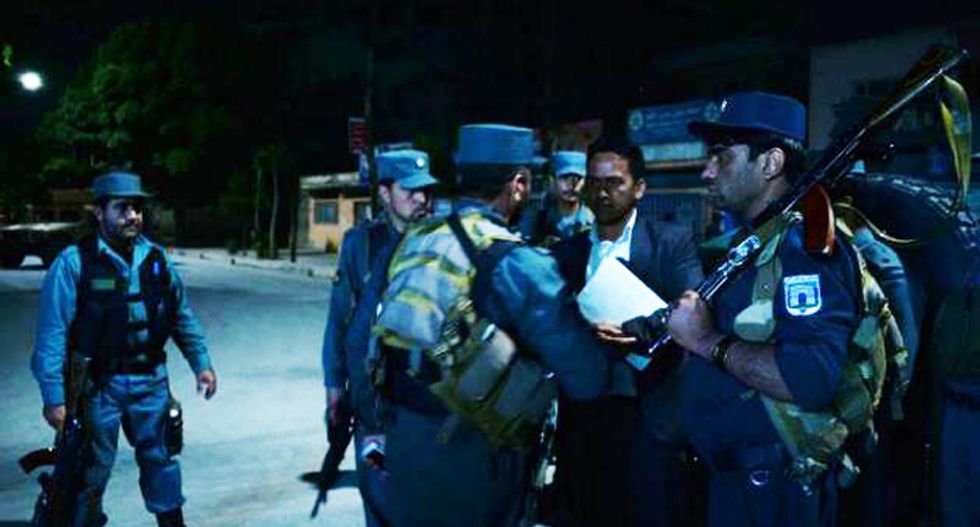 Afghan police stand gaurd near the Park Place guesthouse in Kabul, early on May 14, 2015 (AFP)

An American was among five people killed when gunmen stormed a downtown Kabul guesthouse, trapping dozens of people attending a concert and triggering an hours-long standoff with Afghan security forces, officials said on Thursday.

No group immediately claimed responsibility for the overnight siege on the Park Palace, but it comes as the Taliban, who have waged many attacks on locations frequented by foreigners, press their annual spring offensive.

The assault, which lasted around seven hours and triggered explosions and sporadic bursts of gunfire, comes as Afghan forces face their first fighting season against the insurgents without the full support of US-led foreign combat troops.

"Five people were killed including foreigners and Afghans in the attack on Park Palace guesthouse," Kabul police chief Abdul Rahman Rahimi told reporters, adding that at least five others were wounded.

"Fifty-four people were rescued by security forces," he added after a large number of armed personnel swooped on the guesthouse, which is located in an up-market district and popular with international aid agency workers.

Rahimi did not give a breakdown of the nationalities of those killed but the US embassy confirmed one American fatality and the Indian ambassador tweeted that there were "a few Indian casualties" without specifying if they were wounded or had been killed.

Indian Prime Minister Narendra Modi said earlier in a tweet that he was "concerned about the situation & I pray for everyone's safety."

"So far we have identified one attacker, but we are looking to see if there were more. We are trying to find out the circumstances in which the attack took place. We need more investigation," Rahimi said.

The Park Palace was due to host a concert by well-known Afghan classical singer Altaf Hussain, with several VIPs invited, when the gunfire started, a guesthouse employee told AFP.

The employee, who did not wish to be named, said he barricaded himself in a room in the building when the shootout began and heard several people screaming in the corridors as gunshots rang out.

The employee later managed to flee the guesthouse and said he saw at least five blood-covered bodies lying near the entrance.

Rahimi, who was at the scene of the ongoing attack, had earlier said security forces faced heavy gunfire from the assailants.

The attack comes a day after a visit to Kabul by Pakistan Prime Minister Nawaz Sharif, who assured Afghanistan of Islamabad's full support in its battle against the Taliban, saying "the enemies of Afghanistan cannot be the friends of Pakistan".

His unusually strong remarks are the latest sign of a thaw in the once-frosty relationship between the two countries. Afghan officials have frequently accused longtime nemesis Pakistan of harbouring and nurturing Taliban insurgents.

But Afghan President Ashraf Ghani has actively courted Pakistan since coming to power in what observers say is a calculated gambit to pressure the insurgents to come to the negotiating table.

Taliban insurgents, who have waged a 13-year war to topple the US-backed Afghan government, launched their spring offensive across Afghanistan late last month, stepping up attacks on government and foreign targets.

The militants have staged a string of attacks on compounds, restaurants and guesthouses frequented by foreigners, including two separate assaults in Kabul last November, one of which left a South African man and his two teenage children dead.

They also launched a major attack on a compound of the International Organization for Migration in 2013.

Their targets last year included the capital's most prestigious hotel, the Serena. In March 2014 four gunmen evaded security checks and opened fire there, leaving nine people dead including AFP reporter Sardar Ahmad, his wife and two of their children.

Afghan forces are now solely responsible for security in the volatile country, after NATO's combat mission formally ended in December with a small follow-up force staying on to train and support local personnel.