Amtrak: How America lags behind rest of developed world on train safety 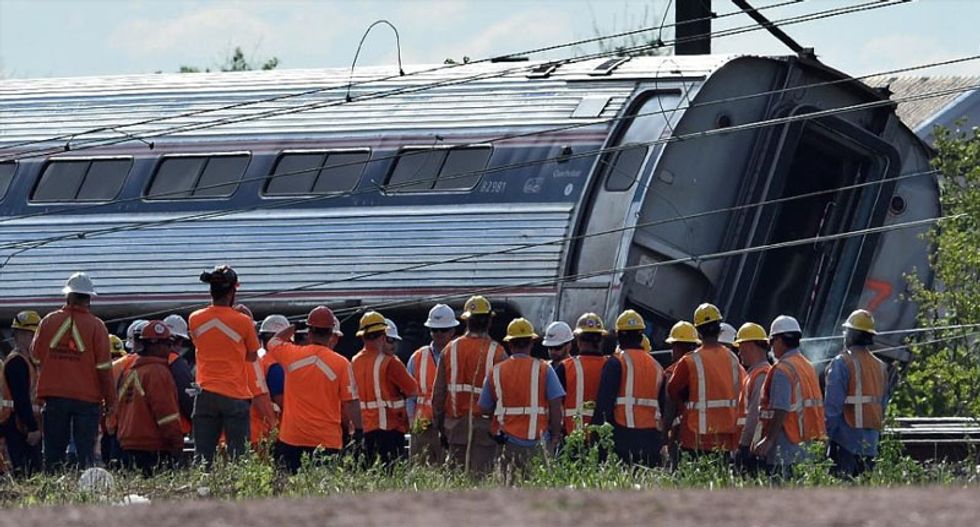 Rescuers gather around a derailed carriage of an Amtrak train in Philadelphia, Pennsylvania, on May 13, 2015 (AFP Photo/Jewel Samad)

Passenger rail services in Britain and much of western Europe have for many years had automatic safety systems that warn train drivers if they are speeding and then trigger the brakes to prevent the kind of crash that killed eight and injured more than 200 in a derailment in Philadelphia on Tuesday.

Amtrak chiefs promised on Thursday, at the same press conference in Philadelphia where officials announced a rise in the death toll in the crash from seven to eight, that the busiest US train system would have automatic braking by the end of the year.

The announcement came less than 24 hours after a congressional committee in Washington voted not to increase public funding for Amtrak by the $1bn requested by president Barack Obama, but instead to cut it further.

And a day after officials admitted that such a safety system would probably have prevented the catastrophic derailment of the passenger train on the mainline between Washington and New York on Tuesday night.

The UK has had a comprehensive automatic braking system that works in conjunction with railway signaling across its network for more than a decade, following upgrades after a series of fatal crashes that occurred from the late 1990s into the early 21st century.

“When it comes to signaling, the Americans are very primitive,” Roger Ford, technology editor of the UK magazine Modern Railways and a trained rail engineer, told the Guardian.

Amtrak has been slow to advance and is currently working towards fitting its version of an automatic safety system, called Positive Train Control, to its services in the north-east in 2015, in line with legislative requirements.

But, on the busiest north-east corridor from Washington to Boston via Philadelphia and New York, it has only been installed successfully at any length on the stretch between Boston and New Haven, Connecticut, the Amtrak president and chief executive, Joseph Boardman, said on Thursday.

“Today I am committing to meeting the requirements for PTC. That will happen in the north-east corridor by the end of this year,” Boardman said at a press conference with Philadelphia mayor Michael Nutter.

America’s sparse rail network is so far behind standards in countries that rely heavily on high-speed rail, such as the UK, France and Japan, that Nutter and commentators said on US TV on Wednesday evening that they had never heard of positive train control until after the latest crash happened.

Talking to CNN’s Wolf Blitzer, who said he had just heard about it for the first time, Nutter confessed that despite being a frequent rail traveler: “Until earlier today I had never heard of this thing in my life.”

Many UK rail lines had various versions of a driver warning system going back to the fifties, with upgrades in later decades and top level systems on select high-speed lines. But by 2005 the bulk of the UK system had been fitted with the upgraded Train Protection and Warning System (TPWS), which Ford said had proved inexpensive and more efficient than many experts had expected, even prompting export sales.

Ford said America’s PTC system was another version of such a system that “the US is struggling to get in” to its system.

“It’s basic kit over here. Human error like this derailment should not happen in the 21st century,” he said.