Amtrak train may have been hit by a 'projectile' before fatal derailment: officials 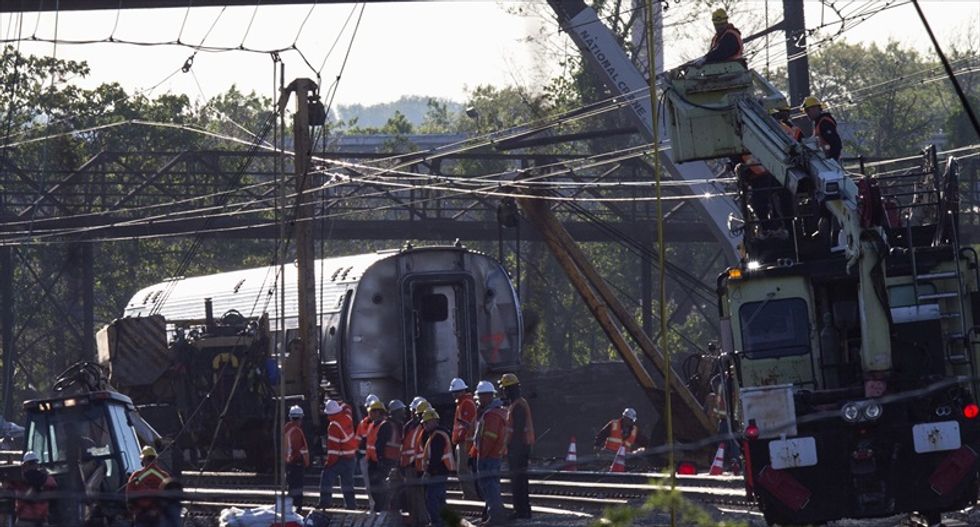 Track workers and officials work at the site of a derailed Amtrak train in Philadelphia, Pennsylvania on May 14, 2015. Photo by Mike Segar for Reuters.

The Amtrak train that derailed in Philadelphia and a separate commuter train in the vicinity may have been hit by projectiles of some kind shortly before the wreck, a U.S. transportation safety official said on Friday, after investigators interviewed members of the Amtrak crew.

But the Amtrak engineer who was driving the train said he had no memory of anything that happened in the moments leading up to the crash when questioned for the first time about Tuesday night's wreck, which killed eight people and injured more than 200 others, said Robert Sumwalt, a member of the National Transportation Safety Board (NTSB).

The Federal Bureau of Investigation (FBI) was called in to examine a remnant of a shattered windshield with a circular damage pattern from the Amtrak locomotive, Sumwalt said.

The revelation that Amtrak train No. 188 might have been struck by an object added an unexpected twist to a crash probe that initially focused on why the train had accelerated to over 100 miles per hour (160 km per hour) in the minute before it barreled into a curved track segment where the authorized speed limit was just 50 mph (80 kph).

The unexplained speed has renewed calls for the installation of "positive train control" technology, which can automatically slow or stop a train to prevent an accident.

An assistant conductor told NTSB investigators on Friday that she heard the engineer, 32-year-old Brandon Bostian, talking by radio with the driver of another train from the Southeastern Pennsylvania Transportation Authority (SEPTA).

The other driver, according to her account, said he had reported to a train dispatcher that his windshield had been cracked by a projectile that he believed was either fired from a gun or thrown at the train, and that he had made an emergency stop as a result, Sumwalt said.

The conductor told investigators that Bostian then replied that he believed his New York-bound Amtrak train had been similarly struck after pulling out of its previous stop, Sumwalt said.

It was moments later that the Amtrak train began to round the curved section of track at twice the authorized speed and derailed in the city's Port Richmond neighborhood along the Delaware River, according to her account.

Sumwalt said FBI agents would arrive on Friday night to examine a remnant from the lower left-hand corner of the locomotive's shattered windshield that appeared to have been cracked by a flying object of some type.

The Philadelphia Inquirer newspaper and other media outlets reported Friday that a third train, an Amtrak Acela, had also been hit by an unidentified projectile that cracked a window on one of the cars about five minutes before it entered the 30th Street station, citing an account of a passenger.

That was the last station the ill-fated Amtrak No. 188 had left about 10 minutes before it derailed. CBS News reported federal safety investigators saying they were aware of the report of a third train being hit.

Sumwalt said investigators still have no explanation for why the train was going as fast as it was, and why it had accelerated from 70 mph to 100-plus mph in the 65 seconds before the crash, as was shown on video footage taken by a camera mounted on the locomotive.

The engineer had slammed on the emergency breaking system seconds before the wreck, investigators said.

Sumwalt said on Friday that Bostian, who has spoken with investigators with his lawyer present and was cooperative, told them he had no recollection of doing that, or of anything else from the time the train had departed from its previous stop.

Experts said the train's speed in the moments before the crash raised several questions: Could a technical glitch have caused the locomotive to speed up so rapidly? Would it take a deliberate action by the engineer? Or could human error, a medical issue, or some other factor like clumsiness explain the sudden burst of speed?

Sumwalt said the train, as designed, can only be accelerated by manual control, but the NTSB would examine whether a mechanical malfunction could have caused the train to speed up on its own.

He said Bostian reported to investigators that he had experienced some technical problems on his way south to Washington from New York earlier that day. He did not elaborate.