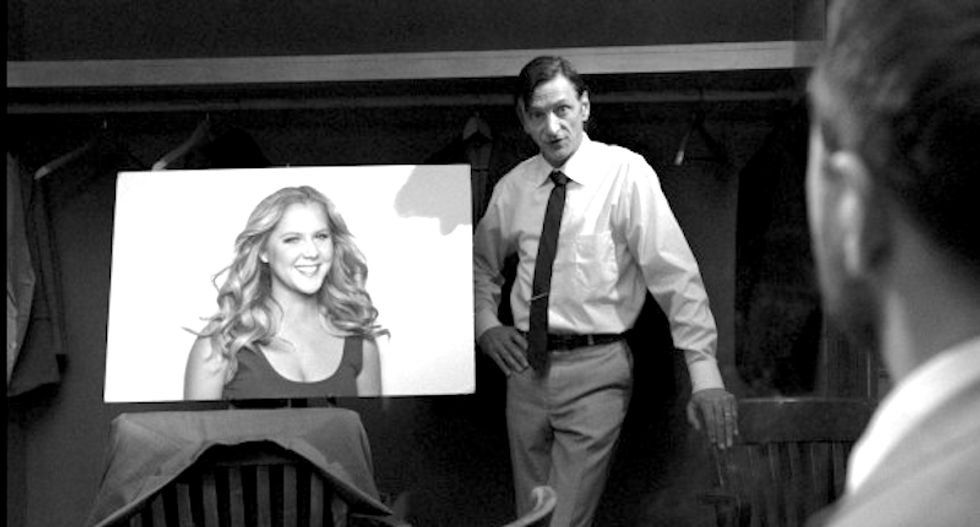 Amy Schumer skewered the sexist superficiality of television Tuesday night in a brilliant parody of the legal drama “12 Angry Men.”

The jury in this case was tasked with deciding whether Schumer was attractive enough to have her own television show.

Actor John Hawkes insists the jurors, played by mostly lumpen, middle-aged character actors, have a full and proper debate before ending Schumer’s life – “well, her appearance, so her life.”

“We’ve all at some point in our lives gotten a semi for a girl with a pillowy stomach or Muppet tits,” Hawkes says. “And that’s all the system demands to acquit Amy. Does she give us a reasonable chub?”

“Her ass makes me furious!” he bellows.

Vincent Kartheiser says he’s at least willing to consider that Schumer may, in fact, be hot enough for television.

“But I still don’t have a reasonable chub,” he says.

Kartheiser admits that he watches television in bed, without his glasses, and usually drinks every night until he blacks out.

“So you’re laying in bed, drunk, and you don’t have your glasses on,” Hawkes says. “So you’re just seeing a general blondeness – legs and boobs and presumably a vagina. If you left your glasses off, is it possible that you would at least consider a few exploratory tugs?”

Kartheiser concedes that he would, and he admits that he has “a reasonable chub.”

A juror points out that Marilyn Monroe was a size 8, while Schumer is a six 6, and Hawkes pressures Giamatti into unzipping his pants to reveal whether he was semi-erect.

Dennis Quaid, who plays the judge, delivers the verdict to Schumer.

“The jury agreed they would bang you,” Quaid says. “You’re hot enough for basic television.”

Watch an excerpt from the episode posted online by Comedy Central: