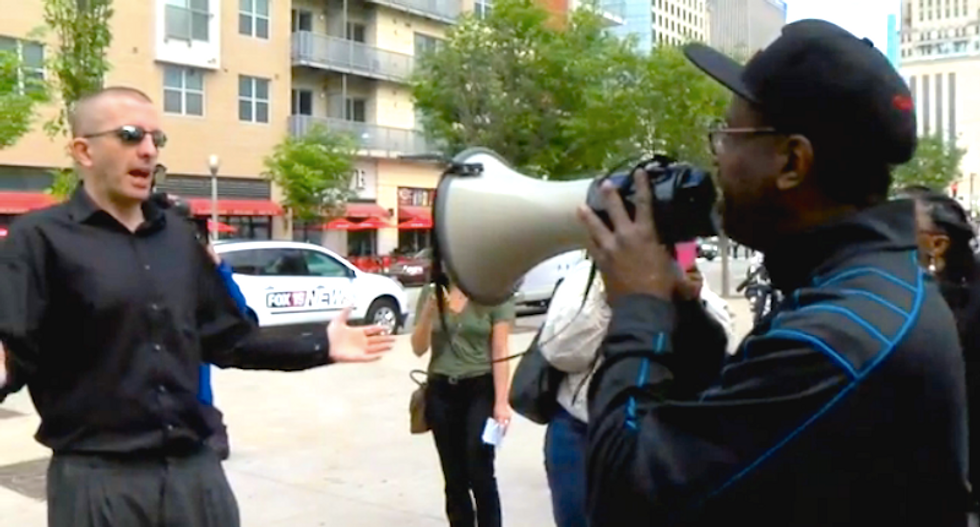 Neo-Nazis disrupted a protest Wednesday in Cincinnati against racial injustice, complaining that civil rights activists were engaged in “white genocide” by trying to end white supremacy.

A group of local ministers called on Major League Baseball – which will hold its All-Star Game this summer in the city – to stand with them against racist policies in the criminal justice system, reported the Cincinnati Enquirer.

The activists said they wanted to call attention to the continuing prosecution of former Juvenile Court Judge Tracie Hunter, who was convicted earlier this year on one felony count of having an “unlawful interest” in her brother’s job as a juvenile corrections officer.

They compared the case to the recent deaths of black men and women at the hands of law enforcement officers.

At least, they tried to make the comparison but were shouted down by about a half-dozen white supremacist counter-protesters.

"How many decades are we going to accommodate the behavior of black criminals?" shouted Robert Ransdell – who ran for U.S. Senate as a write-in candidate last year in Kentucky.

Ransdell -- who was arrested during a Martin Luther King Jr. Day protest near his home in Florence, Kentucky – resisted calls by the black activists to find some common ground.

"If you can't have an intelligent conversation, move on," said Bobby Hilton, leader of Word Deliverance Ministries.

The Rev. Damon Lynch III – who organized a boycott following Cincinnati’s 2001 riot that led to citizen oversight of the police department – said civil rights activists have always had to contend with “angry white people espousing their views” and trying to halt racial progress.

The activists don’t intend to boycott the All-Star Game, but they want to leverage the event to call national attention to Hunter’s suspension and jailing.

She will be retried on eight charges of forgery, tampering with evidence and theft in office after a jury was unable to reach a verdict on those counts in the previous trial – which ended with a six-month jail term.

Prosecutors say Hunter – who was declared the winner of a controversial 2010 election after a lawsuit forced some previously uncounted votes to push her past her white, male Republican rival – abused her power on the bench.

But supporters say Hunter – the first black and Democratic judge in Hamilton County Juvenile Court’s history – was targeted due to her race and as part of a “personal vendetta” by the GOP prosecutor, Joe Deters.

Watch video of the confrontation posted online by the Cincinnati Enquirer:

Conservation advocates applauded Friday following a vote at the 19th meeting of the Convention on International Trade in Endangered Species in Panama, at which delegates from 183 countries and the European Union voted for sweeping protections for shark species.

"This landmark vote marks the culmination of a decade of shark conservation progress within CITES."