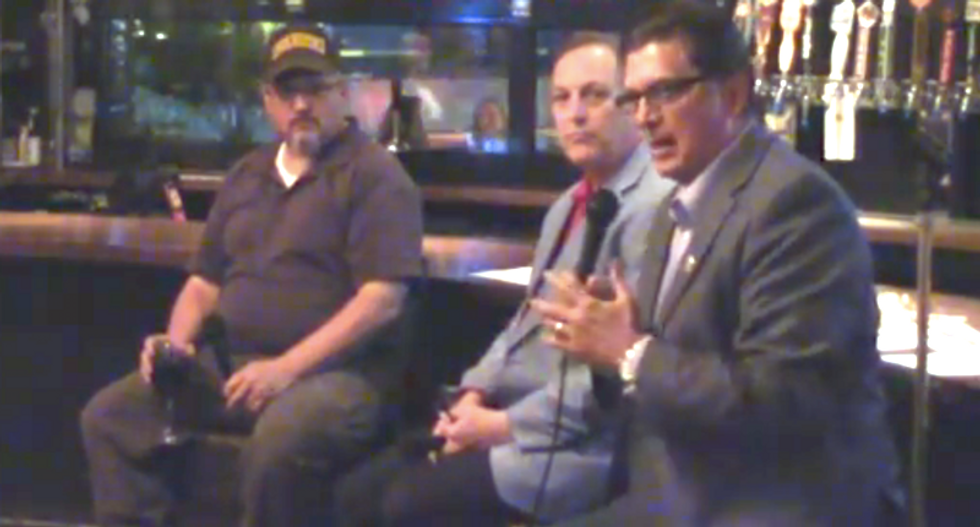 The founder of the Oath Keepers group suggested that U.S. Sen. John McCain (R-AZ) be “hung by the neck until dead” for treason – as the Republican president of the Arizona Senate sat beside him.

Rhodes and other Paul supporters complained that the “GOP good-ol’-boy network” had conspired to shut them out in 2008 and 2012 at statewide conventions across the country so they could get “their preordained, anointed candidate who would go along with the program of the destruction of this country.”

“John Cain is a traitor to the Constitution,” Rhodes said, misstating the senator’s name.

The crowd, which was gathered to argue against a proposed convention of the states to rewrite the constitution, cheered enthusiastically.

Video from the event shows state Senate President Andy Biggs seated next to Rhodes and former sheriff Richard Mack, although the lawmaker’s reaction to the remarks are not shown.

“He should be tried for treason before a jury of his peers — which he would deny you,” Rhodes continued. “He supports your denial of a jury trial, he supported the (National Defense Authorization Act) saying that he could just have the president slam you into a brig in North Carolina or South Carolina or wherever else he wanted to, try you by military tribunal and have you executed.”

“He would deny you the right for trial to jury, but we will give him a trial for jury, and then after we convict him, he should be hung by the neck until dead,” he added. “But that was their candidate.”

The cheers were more muted as he specified how he would like to see the Vietnam veteran and senator executed.

Biggs told a reporter that he thought he was attending the Christian "Promise Keepers" men's group and was not familiar with the Oath Keepers.

He told the Arizona Republic that he did not speak up when Rhodes called for McCain's execution out of respect to his free speech rights.

The senate president appeared to be intrigued when Mack, who promotes the "nullification" of federal laws by states and counties, suggested that Arizona free itself from federal authority by withholding tax money.

“You want to balance the budget?" Mack said. "Get the governors together and the state legislatures together and tell them, ‘This is how it’s going to be from now on, we’re not going to send you this and we’re not taking this, we’re not going to do this, and we might even tell the citizens, we might even pass a law in Arizona to nullify federal income tax.’ That would be courageous, wouldn’t that? It would also be a lot of fun.”

Watch both speakers in this video posted online by OnFreedomRoad:

Lincoln Project co-founder and former GOP strategist Steve Schmidt wants the United States to strip Rupert Murdoch of his U.S. citizenship, calling the 91-year-old Australian-born media titan "the most venomous and dangerous foreigner to ever arrive on American soil."

Murdoch is the man behind News Corp, a massive multi-national conglomerate that in the U.S. owns Fox News, The New York Post, the Wall Street Journal, book publisher HarperCollins, and even realtor.com.