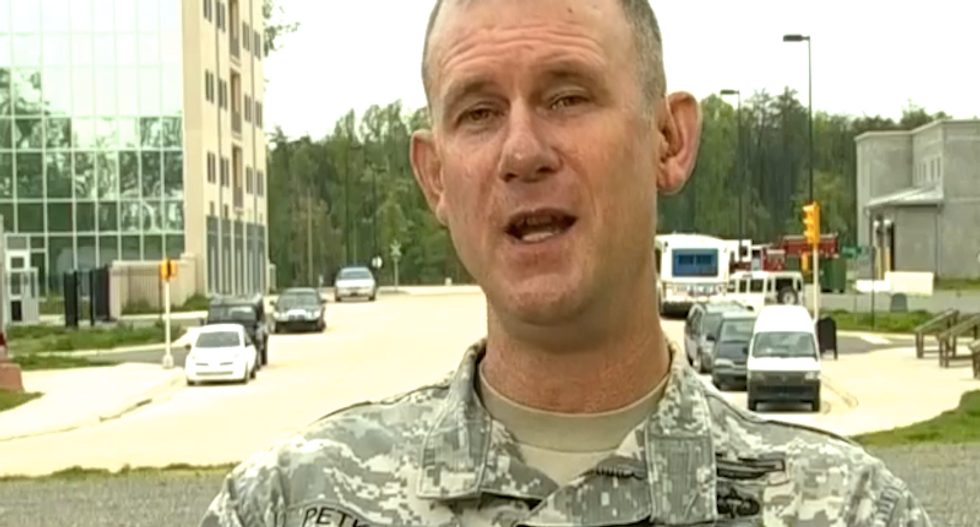 Conspiracy theorists took over a call-in show with a U.S. Army colonel who trains soldiers to fight rapidly evolving modern warfare at a base in Virginia to express their fears of a military takeover.

Col. John Petkosek, commander of the U.S. Army Asymmetric Warfare Group at Fort A.P. Hill, appeared Wednesday on C-SPAN to discuss the 300-acre facility, which opened in 2014 and uses realistic buildings to train troops in urban combat against unconventional enemies.

The first caller, Herbie from Moss Point, Mississippi, was alarmed that the buildings looked more like something he would expect to find in the U.S. than in a foreign country – and he asked the colonel if troops were training to invade inner cities to fight against police protesters.

“Herbie, that’s not really true,” Petkosek said. “What we’re doing is training us soldiers to operate in any contingency around the world.”

He said troops provide disaster relief in the U.S. and abroad, in addition to preparing for “high-end military conflict,” and he said the realistic buildings help boost soldiers’ chances of survival when they fight against real-life enemies.

The next caller, John from Breezewood, Pennsylvania, saw videos of the facility online with men in John Deere caps begging soldiers not to take their guns, and he’s afraid Americans will be disarmed during an economic catastrophe.

“Everything on the Internet is not necessarily true,” Petkosek said, adding that military officials were open about the training conducted at Fort Hill. “There’s no secrets to be had. You talk about what protects us, well the Constitution protects us, and that’s what the U.S. Army is here for is to defend the Constitution of the United States.”

He tried to assure viewers that what the military was training for was the opposite of what the caller had suggested, but the next caller expressed similar fears.

Lynnie from Prescott, Arizona, said she wanted to alert the public about the upcoming Jade Helm 15 training exercise, which will span seven southwestern states for three months this summer and involve civilian volunteer participants.

“Unfortunately, it’s not something that I’m familiar with, so I can’t really explain that,” Petkosek said. “But I do know those types of things are things that we do here, where we do get our soldiers an opportunity to work with civilians and soldiers.”

He said troops used “autonomous robots” dressed in uniforms or civilian clothes in the simulated environments at Fort Hill to help soldiers distinguish between friendly forces and enemies.

Justin in Petaluma, California, agreed with previous callers that the buildings looked like what he was used to seeing in the western U.S. – and he strongly doubted the preparations were being made for overseas conflict.

“This is a very scary and new thing that it looks like the military is going to be taking on,” Justin said.

The caller said, with the exception of a mosque mockup, the simulated environments use American-style buildings with signs printed in English.

“It is a very complicated world out there, and you shouldn’t find it scary or frightening – you should find it reassuring that we’re training our soldiers to be able to operate across a broad spectrum of facilities,” Petkosek said.

The colonel said he trained in his early days in the Army to fight wars in wooded environments, but he said recent conflicts have been fought in urban environments – and current training reflects that reality.

Petkosek explained that the church and mosque sets sometimes adapted to serve other purposes during training exercises, and they’re intended to teach soldiers to be sensitive to religious concerns even when enemies take haven there.

“We all know the media reports of soldiers causing harm to our cause by being insensitive to those things,” the colonel said.

He said foreign organizations had periodically trained at Fort Hill, including Mexican authorities hoping to learn to better identify drug or explosive-making facility, although he said the Army does not typically participate or oversee those exercises.

Rhonda from Springfield, Massachusetts, said she had heard of law enforcement agencies training in malls after closing hours – and she wanted to know if the military and police preparing to impose a one-world government.

“The short answer is no,” Petkosek said.

John from Buffalo, New York, said the U.S. would never again send its troops into an overseas urban environment but would instead “light it up” with a nuclear weapon – and he was certain the facility was used to train soldiers to fight in American cities.

“We as soldiers and as a nation can’t say what the future holds, and you can’t predict it,” Petkosek said. “But to say we’re not going to fight in a particular way -- well, our enemy has got a vote in that, and they’re going to determine how and where we might have to fight in the future.”

Mike from Hinson, Alabama, said callers were afraid the military’s civilian leadership was in the hands of the domestic enemies of the constitution, and he wanted to know what the colonel would do when faced with an unconstitutional order.

“I raised my hand and said I would support and defend the Constitution of the United States of America, and that’s what I’m charged to do,” Petkosek said. “That’s what our soldiers sign up for.”