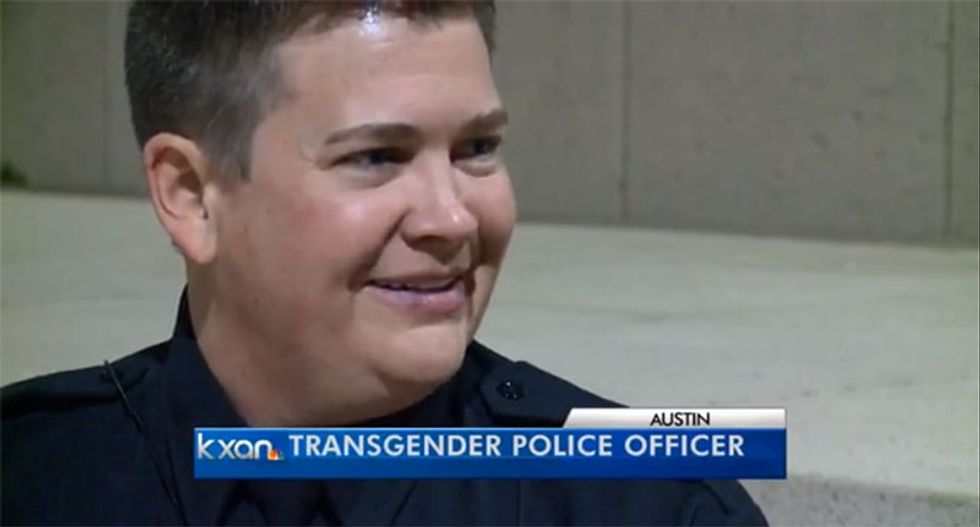 Senior Officer Gregory Abbink came out in 2014 as the first transgender in the Austin Police Department. (Screen capture)

Senior Police Officer Gregory Abbink -- the first openly transgender officer in the Austin, Texas police department -- has received support and encouragement from his fellow officers during his year-long transition to a male, the Christian Science Monitor reports.

Born Emily, Abbink started the process in April, 2014. His job demands a tremendous amount of trust -- and coming out wasn't easy.

"I am more than happy to send any other information if you’d like," he wrote in a letter to his fellow officers announcing his life-changing decision. "I pray that this doesn’t change our friendship as you all mean the world to me! As this transition will take a little while, I totally understand that it will be an adjustment for everyone. . . . I am always here for you guys!"

So far, his colleagues’ response has been positive. The support he receives is partly credited to Austin Police Chief Art Acevedo, a long-time supporter of LGBT rights who has made a priority of the department to support queer officers and the LGBT community at large.

Having immigrated from Cuba as a child, Acevedo remembers how it felt to be different. "I want to send a message that we stand with all communities. People can be who they want to be," he told the Austin Chronicle. "Inclusion starts at the top."

Before his transition, Abbink identified as a lesbian. But he's known he was male since he was five years old. Growing up in a conservative community in New York's Finger Lakes, however, forced him to keep it a secret.

"Growing up, I was forced to think and act like the other little girls around me ...All my mannerisms and interests were different from my female classmates, and I knew I was different. I loathed having to wear dresses or anything that identified me as female, because on the inside, I was screaming for someone to hear me ...That I was a boy," he wrote in the letter to his colleagues.

He played basketball and softball in middle school, and was always seen as a typical "tomboy."

"It was awkward, being on an all-girls team. I didn’t quite fit in, but I loved the sports, so that’s what kept me going," he told the Christian Science Monitor.

He fell in love with his wife, Joan Henke, in 2009. The two tied the knot as a same-sex couple in New York in 2012. The transition has been a struggle for his wife, Abbink said, because it shifted their relationship to a heterosexual one.

"She is one of those phenomenal and rare individuals who is able to love unconditionally, to love me for who I am," he said.

The decision to transition came after Abbink's nephew, born female, came out as transgender. At the time, Abbink was in his 40s.

"I guess I maybe just went through my life’s experience and matured," he said, "and I realized, 'You know what, I can handle this now. I can deal with it.'"

Watch video about Abbink's coming out in 2014 below, courtesy of KXAN-TV.