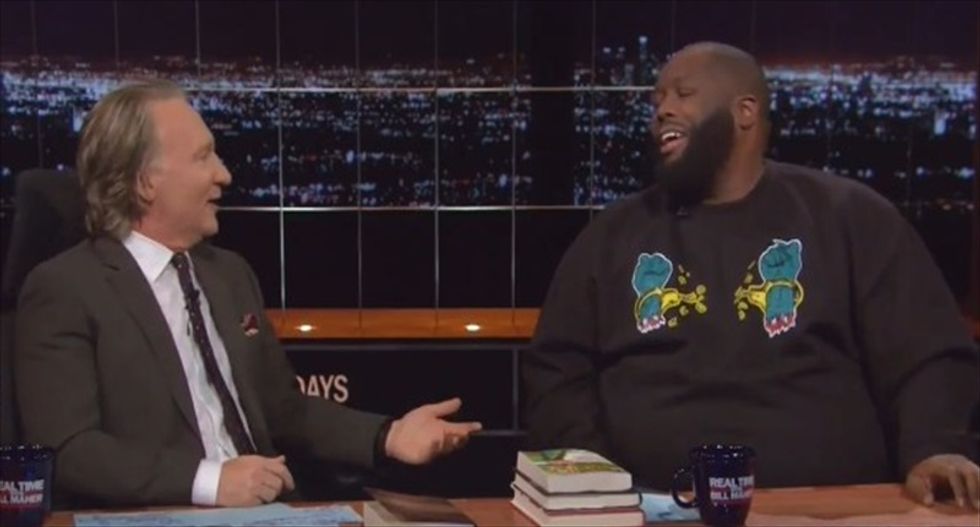 It's not that he has a problem with Bill O'Reilly, rapper "Killer" Mike Rendell told Real Time host Bill Maher on Friday -- he has an issue with how seriously the Fox News host is taken by his fans.

"He is always going after rap as the reason for every ill," Maher said, before Rendell cut in.

"He's more full of sh*t than an outhouse," he said of the Factor host. "I'm gonna go into a black club and see him with a stripper on his lap, I guarantee you that. He's as fictional as those books he writes."

Maher pushed back, however, when Rendell tried to argue that O'Reilly is playing a character on his show.

"He may be full of sh*t, but it's sincere sh*t," Maher said, drawing a skeptical reaction from the rapper.

As Media Matters reported, O'Reilly tried to blame rap music earlier this week after a recent poll showed more Americans stating they were non-religious. He argued that "pernicious entertainment" like rap was contributing to the decline in the number of Christians in the US.

Furthermore, he said, a culture of individualism was responsible for the demise of the Roman Empire. O'Reilly did not mention, though, that the rise of Christianity is cited as one of the factors that contributed to the erosion of that society's "traditional values."

"Jesus was, like, the original rapper, though," Rendell said on Friday. "Arguably a black guy -- or at least dark; hung with a posse of homies; one of them was strapped with a knife; went to war with the government [and] lost, like a lot of black guys do. And everybody loved him more after he died, like Tupac."