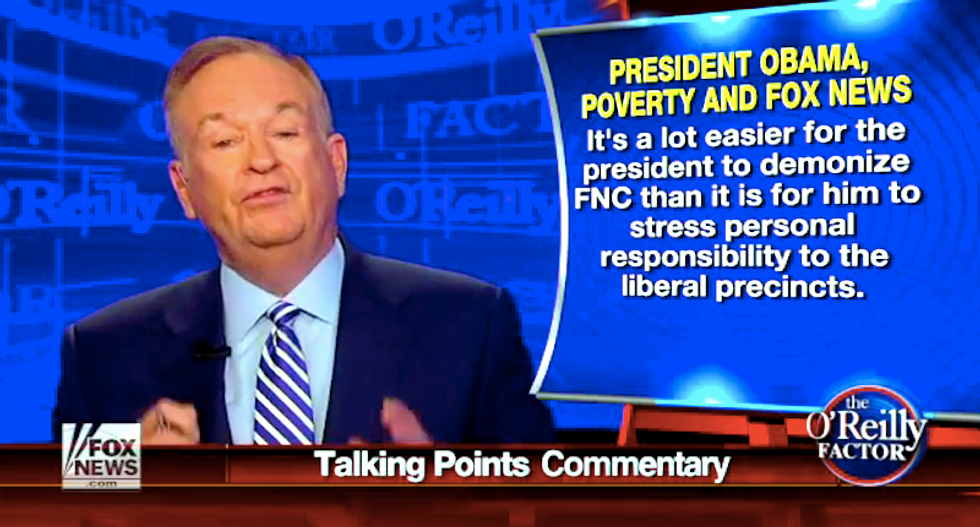 Fox News hosts slapped back at President Obama, who criticized the network for kicking down at the poor.

Bill O’Reilly said the president should focus more on lecturing poor people than conservative media scolds – who characterize the poor as ungrateful leeches undeserving of seafood.

“(It’s) a lot easier for the president to demonize Fox News, which tells the truth, than it is for him to stress personal responsibility to the liberal precincts,” O’Reilly said.

However, the president did encourage the poor to take personal responsibility in the Georgetown University speech that has outraged conservatives – proving an observation Obama made during a Fox News appearance with O’Reilly, who asked why he never addressed the dissolution of black families.

O’Reilly was most angry at New York Times columnist Charles Blow, who used the president’s remarks as a springboard to highlight all the instances – using research conducted by Media Matters – where the Fox News host suggested poor people were lazy, drug-addicted, and apathetic.

He described the left-leaning media watchdog as “Internet hate merchants” and said Blow was “lazy” for relying on their research instead of conducting his own redundant quote-digging.

Fox News host Neil Cavuto also took exception to the president’s comments – but he was even angrier at “Daily Show” host Jon Stewart, who called out the conservative network’s broadcasters for their mean-spirited view of the poor.

Cavuto said Fox News did not hate the poor, although he questioned “whether all the people we’re supposedly helping are poor.”