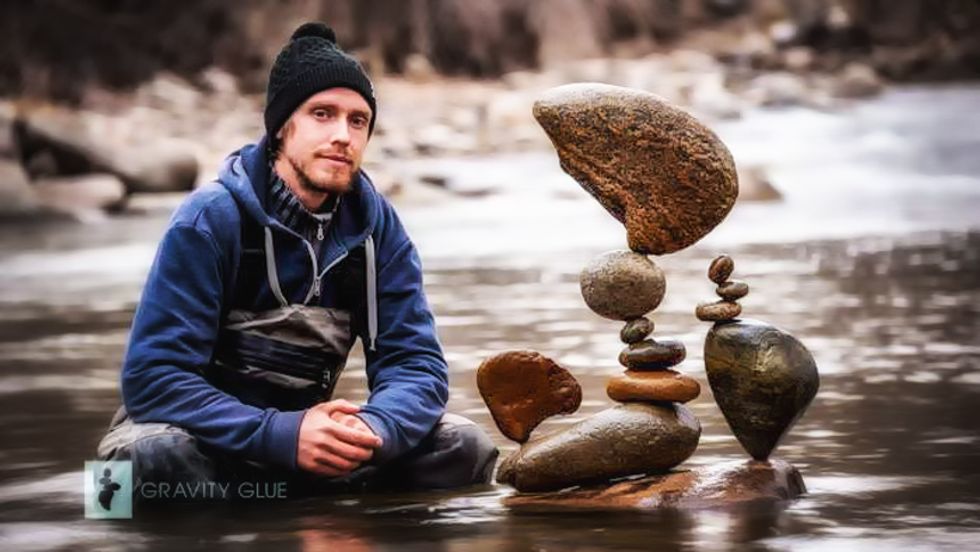 Michael Grab, a Boulder artist who goes by the name Gravity Glue, said that police threatened to ticket or jail him for creating stacked river rock sculptures that the community has been enjoying for years.

In a Monday Facebook post, Grab explained that a Boulder police officer had informed him that there would be stiff penalties for continuing his art.

"For the past 7 years i have been creating this art in and around Boulder, Colorado, USA. nearly every day!" he wrote. "[J]ust this weekend, one police officer has decided that balancing rocks in Boulder, Colorado is now illegal, obscurely referencing two city codes [5-4-8 and 5-4-2] about 'destruction of public property' in relation to rocks."

"So now the police have belligerently taken it upon themselves to write tickets and/or arrest ANYONE balancing rocks in Boulder, CO. and specifically threatened to ticket me and/or arrest me if they catch me in the future," the artist lamented. "[I] encourage as many people as possible (especially locals) to contact the city council here in Boulder and voice your support for this long standing tradition in Boulder. [I]t is something that an overwhelming portion of the community supports."

Grab said that he would be forced to leave Boulder if the city council did not step in to clarify the city ordinances.

Rooster Magazine wondered why Boulder police felt the need to focus on "Draconian rock art witch hunt" instead of higher-than-average rates of rape and theft.

"Why is any of this important? Because if we ban every bizzaro Boulder character that causes a stir (see: nude gardening woman), we're left with nothing more than a college town with a Target that's about to become Google's new headquarters," the magazine noted. "At a time like this, we need less kid gloves in the form of overzealous legislation, and more attention paid to retaining the city's core personality. And if you don't like that, f*cking move to Westminster."

In the end, the call to action worked. Grab said that the city attorney personally called to let him know that rock stacking was not illegal in Boulder.

"UPDATE: holy shit! maybe the support was more than i anticipated!!" he exclaimed. "[J]ust got a call from the city attorney personally here in Boulder telling me that he has ordered the police to NOT cite rock balancing under the city codes [I] mentioned below!!!"

"THANK YOU everyone for the overwhelming support!!!! [T]hey must have gotten lots of calls!! haha :))"

Watch a video below of Gravity Glue doing his thing.