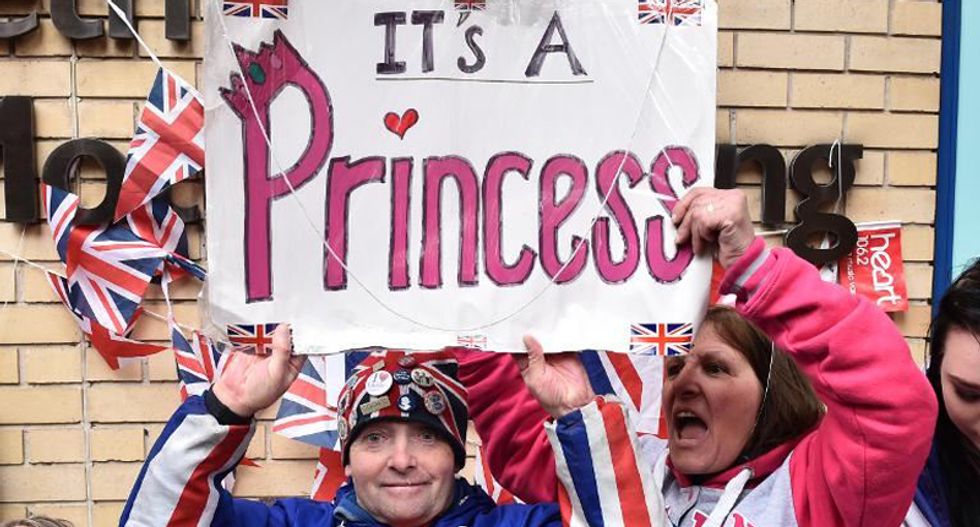 Royal fans celebrate outside the Lindo wing at St Mary's hospital in central London, on May 2, 2015 - AFP

Prince William's wife Kate gave birth to a baby girl on Saturday to cheers from a crowd outside the hospital as Britain celebrated the royal family's new fourth in line to the throne.

The news was announced to the world in a tweet from Kensington Palace, the couple's official residence in London, and by a traditional town-crier with a bell on the steps of the Lindo Wing of St Mary's Hospital.

A proclamation signed by the royal doctors was also placed on a gilded easel in front of Buckingham Palace, where hundreds of curious onlookers crowded in front of the gates to witness the historic moment.

"Her Royal Highness The Duchess of Cambridge was safely delivered of a daughter at 8.34am," the Kensington Palace press office said in a statement.

Mother and baby "are both doing well," it said.

William was present for the birth and the baby weighed in eight pounds and three ounces (3.7 kilos).

Labour Party opposition leader Ed Miliband, who is hoping to unseat Cameron in the general election next week, tweeted: "Wishing them lots of joy and happiness - and hopefully some sleep!"

William and Kate were expected to leave the hospital later on Saturday with their baby girl, their second child after Prince George who was born in 2013.

Media teams from around the world rushed to the private maternity wing of St Mary's hospital in the early morning, joining a group of royal superfans who have remained camped outside for more than a week.

"It's a girl! It's a girl!" the diehard supporters sang out after the birth was announced.

Kate's parents and all senior members of the royal family, including the 89-year-old Queen Elizabeth II, who is currently at Windsor Castle near London, were told the news before it was formally announced.

The new Princess of Cambridge will be fourth in line to the throne after Queen Elizabeth's eldest son Charles, grandson William and great-grandson George.

She is the first major royal who cannot be overtaken in the line of succession by any future younger brothers following changes to the law.

As a bookmaker walked past with a board showing Alice was the odds on favourite outside the hospital, 82-year-old Josie Rosa said: "Alice is an old fashioned name, that's my mum's name."

Her niece Karen Reardon, 51, replied: "Well they've got to have old fashioned, haven't they? They're not going to call her Gucci are they, or Chanel?"

Many fans spoke of their memories of William's late mother, Princess Diana, who gave birth to William and his brother Harry in the same clinic.

She died in a car crash in Paris in 1997 and her memory is still cherished by many Britons.

"I'm so pleased," Margaret Tyler, 71, who wore a jacket in the colours of the British Union Jack flag and a badge in honour of Diana.

"William wanted a girl and Diana wanted a girl. I think it's just nice for George to have a little sister," she said.

As pink bunting was put up outside the hospital, royal fan Kathy Martin donned a pink party hat and started dancing on the spot.

"It's the happiest news, just what we've been waiting for!"

At Buckingham Palace, a queue formed to file past the easel announcing the royal birth.

"It's an unforgettable day in my life," said Joy Buttinger, a nurse living in Austria who was on holiday with her 18-year-old daughter.

Kensington Palace had announced Kate's pregnancy in September and she struggled with severe morning sickness as she did in her first pregnancy.

She was admitted to hospital with her husband earlier Saturday in the early stages of labour.

"I heard it on the radio and I got up and came straight here!" Michelle Lassiter, a 55-year-old charity worker who travelled from her home in Guildford near London with a fold-up chair, told AFP.

William and Kate are planning to spend the first few days after the birth at Kensington Palace.

They will then travel to Anmer Hall, a secluded 10-bedroom country mansion on Queen Elizabeth's privately-owned Sandringham estate in Norfolk, eastern England, where they have set up home.

Cannons will be fired to celebrate -- 62 from the Tower of London and 41 from Green Park -- and the British flag will be flown from government buildings.

There will alo be a military parade past Buckingham Palace with soldiers, horses and guns from The King?s Troop Royal Horse Artillery regiment.

Sophie Fornairon's independent bookshop has survived the rise of Amazon thanks to a French law that prohibits price discounting on new books, but she says the e-commerce giant's ability to undercut on shipping still skews the market against stores like hers.

Fornairon, who owns the Canal Bookstore in central Paris, now hopes that new legislation that would set a minimum price for book deliveries will even the contest further in the battle of neighbourhood stores against Amazon.