Bush acolyte John Bolton on Clinton: 'We are never going to let her forget' Benghazi 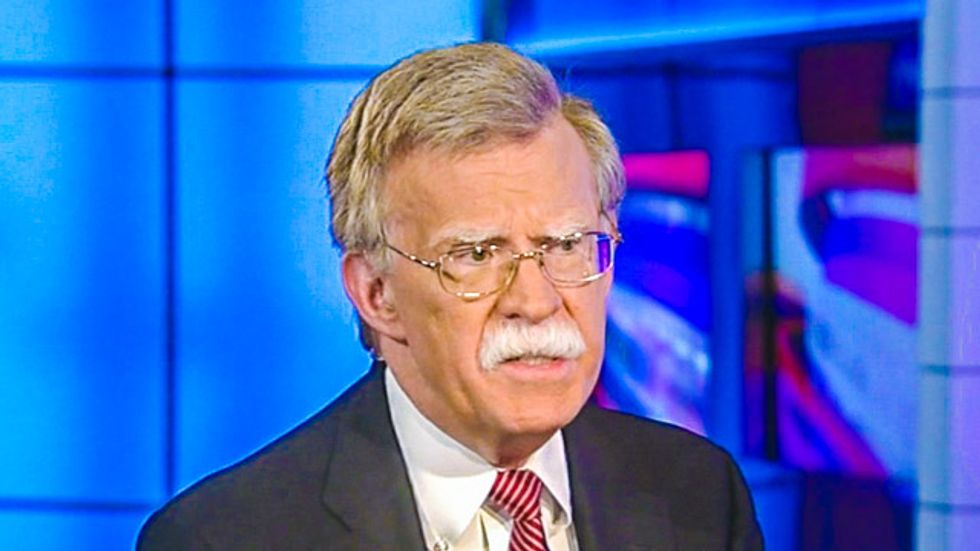 John Bolton, ex-Bush administration ambassador to UN, warns of Isis infiltration into US and says Iran could lead ‘nuclear holocaust’ against Israel

As Republicans plot to retake the White House in 2016, a crowded and diverse field of contenders is vying for the party’s nomination . Among declared and as-yet undeclared hopefuls are three US senators, two former presidential candidates, a handful of governors, a former Silicon Valley CEO and a retired neurosurgeon.

A former ambassador to the United Nations may soon add his name to the list of candidates, citing a lack of experience among rivals on what many Republicans believe will be one of the defining issues of the next election: foreign policy.

John Bolton, who served in the administration of George W Bush, descended upon the South Carolina Freedom Summit on Saturday to test the waters for a 2016 presidential bid. His message: under Barack Obama, a terrorist attack is imminent.

“Whether that attack in Garland, Texas was legitimately an Isis attack, I don’t know. They’ve taken credit for it; it may just be bluster,” Bolton said in an interview with the Guardian. “But even if it’s not an Isis attack, Isis is coming.”

Last week, two gunmen attacked a “draw the prophet” event in Garland . Both were shot dead by police.

“Thousands of Europeans and Americans with valid passports went to Syria,” Bolton added, of the Middle Eastern nation, racked by civil war, in which the Islamic State has conquered large areas and established a de facto capital, in Raqqa . “They’ll be coming back in due course.”

Stoking fears of Isis infiltration is hardly a new strategy. Republicans made similar claims leading up to the 2014 midterm elections, when videos of Isis beheading hostages first appeared. It is also the most prevalent – and dramatic – way in which 2016 GOP hopefuls have lambasted Obama’s foreign policy record, seeking to draw a contrast to how they would approach the role of commander-in-chief.

Whether that attack in Texas was legitimately an Isis attack, I don’t know. But even if it’s not, Isis is coming

Most candidates have chosen rhetoric over proposals, pledging simply to bomb Isis into oblivion. On Saturday in Greenville, Florida senator Marco Rubio, considered relatively experienced in foreign policy matters, quoted Liam Neeson in the 2008 action movie Taken when he defined his message to terrorists as: “We will look for you, we will find you and we will kill you.”

Bolton called for a broader military campaign and questioned whether the US-led coalition is actually bombing Isis and training Syrian rebels. US-led air strikes against Isis began in Iraq on 8 August and Syria on 23 September, and have now run into the thousands.

Like other 2016 contenders, he also assailed the Obama administration’s nuclear accord with Iran, going so far as to say the Islamic Republic was “capable of carrying out a nuclear holocaust” against Israel.

Bolton pointed to public polling showing that most Americans oppose the Iran deal. In recent weeks, however, polling has found that a majority support the framework agreement announced last month and oppose action by Congress that would sabotage the deal.

Bolton has nonetheless been a constant critic of the negotiations. In March, he penned a controversial op-ed in the New York Times in which he called for bombing Iran before it got a nuclear weapon.

He has also adopted one of the central conservative arguments against Obama’s foreign policy – that the president lacks leadership ability and is anti-war. Asked if American voters, increasingly wary of military intervention after more than a decade of war, would want a return to a hawkish foreign policy, Bolton again blamed Obama for such public sentiment.

So what would make Bolton stand out in a primary in which most candidates are drawing on the same themes?

“I think I’ve got the most real experience of foreign policy of any of them, so the real question is how they’re going to catch up with me,” he said.

Related: Hillary Clinton will testify once – not twice – at House Benghazi committee

Bolton did not spend much time discussing his qualifications for the White House, focusing instead on Obama’s foreign policy failures and linking them to his former secretary of state, the declared Democratic candidate Hillary Clinton. Bolton revived memories of the September 2012 attacks on US facilities in Benghazi , Libya to argue that Clinton should be disqualified from running for president.

Clinton’s “unwillingness” to answer questions about Benghazi showed “how vulnerable she understands herself to be”, Bolton later told a crowd of roughly 2,000 grassroots activists gathered for the event.

“As we get closer to November 2016, we are never going to let her forget that.”