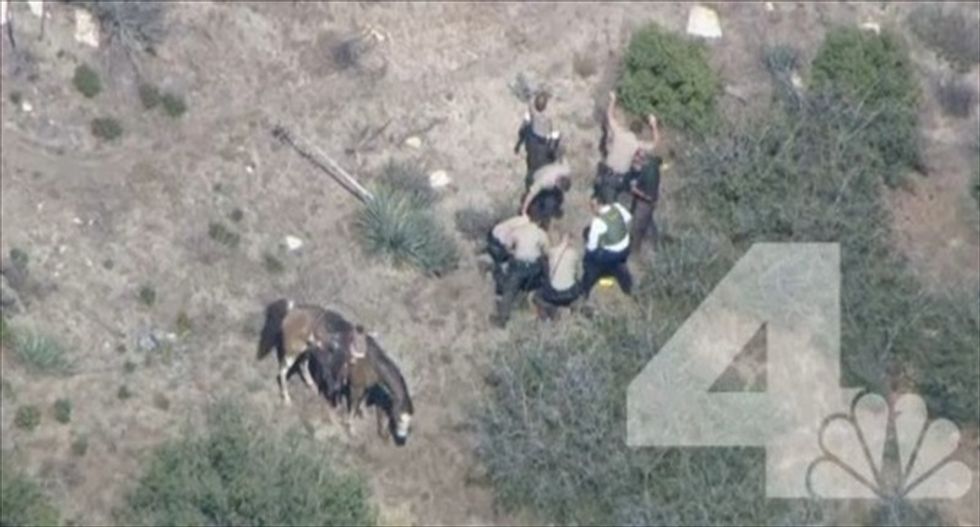 A California man who received a $650,000 settlement after being beaten by about a dozen sheriff's deputies in a failed attempt to flee on horseback has been charged with felonies connected to the incident.

The criminal complaint, which was filed in a San Bernardino County court, charged Francis Pusok with 14 crimes, including grand theft of livestock, animal cruelty, evading a police officer, and reckless driving. Several of the charges predated the April 9 incident.

The complaint, a copy of which was published online by the Los Angeles Times, said Pusok, 30, was under the influence of marijuana and amphetamines at the time.

"We are disappointed, but yet sadly not surprised," Pusok's attorneys, James Terrell and Sharon Brunner, told the Times, describing the prosecution as "retaliatory, unjust, unfair and inequitable."

The footage of Pusok's beating and arrest surfaced amid a national outcry over police violence against suspects, particularly minorities, following high-profile police killings of unarmed black men in cities like Ferguson, Missouri, and New York over the past year.

Pusok initially drove off in a car when officers arrived at a residence to serve a search warrant as part of an identity-theft investigation, officials said.

He ditched the car, ran a short distance and stole a horse before deputies in off-road vehicles and helicopters closed in on him in rugged, hilly terrain near the town of Apple Valley.

The video shows Pusok riding the horse, falling off, scrambling to his feet, then throwing himself to the ground with his arms outstretched as two deputies ran up with Tasers drawn.

The two deputies are seen pouncing on Pusok, taking turns repeatedly punching and stomping on him while several more officers join in, delivering repeated blows and kicks in a beating that goes on for at least two minutes.

Ten officers involved in the beating were placed on paid administrative leave pending investigations by the sheriff's department and FBI.

San Bernardino County said in a statement last month the county would pay Pusok $650,000 and that the agreement, which "acknowledges no wrongdoing," settled all potential legal claims stemming from the incident.