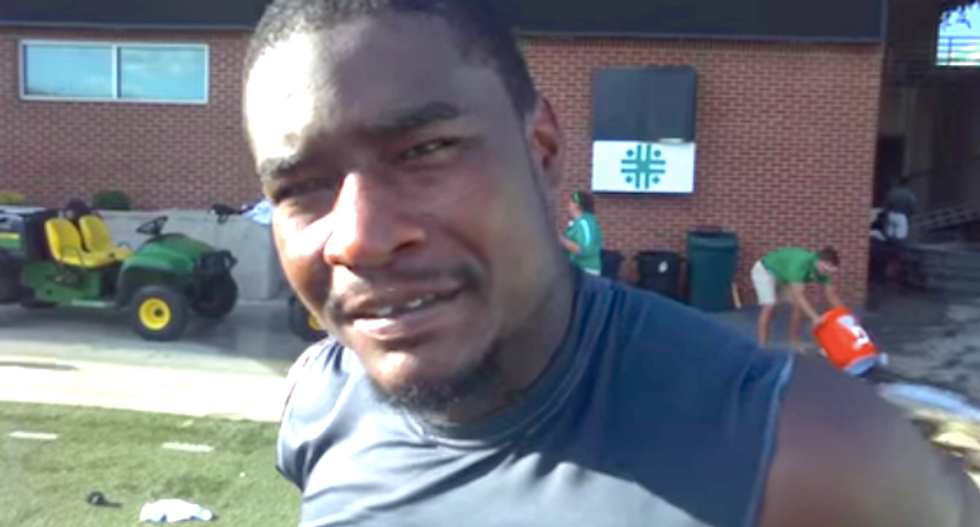 A college running back was dismissed from the Marshall University team after he was arrested for attacking two gay men he saw kissing in public.

Steward Butler is accused of attacking the couple April 5, moments after he saw them kiss in downtown Huntington, West Virginia, reported The Herald-Dispatch.

Police said Butler got out of a passing vehicle after seeing the kiss, shouted anti-gay slurs at the men, and then punched each of them in the face with his fist.

“He called us f*ggots, queers, you name it,” one of the victims, 20-year-old Casey Williams, told BuzzFeed. “We were trying to ignore him, but he jumped out of the car and came running up to us.”

Williams said the football player was "hitting to cause damage" when he punched him and 21-year-old Zack Johnson. The couple was visiting from the West Virginia town where they live.

“It was frightening, of course,” Williams said. “What was going to happen? We were downtown in the city in the middle of the night. People are yelling that we’re gay. If they will hit you for being gay, are they also going to stab you for being gay?”

The 23-year-old Butler, who is originally from Florida, claimed he acted in self-defense after the pair approached the vehicle he was riding in with other football players.

But Johnson captured the attack on video that police said disputed Butler’s claims.

Butler was charged Wednesday with two counts of misdemeanor battery, and the university dismissed him from the football team.

“The type of violent, bigoted behavior reported to have been perpetrated by this student is not tolerated at Marshall University. Period," said interim Marshall University President Gary G. White. "This is an extremely serious matter."

Police have turned over the case to the FBI to investigate possible civil rights violations.

“If we were straight, he would not have punched us that night,” Williams said. “That right there is a hate crime.”

Butler has three previous arrests for marijuana possession in Florida, according to court records.

Watch an interview with Butler posted online by Derek Redd: