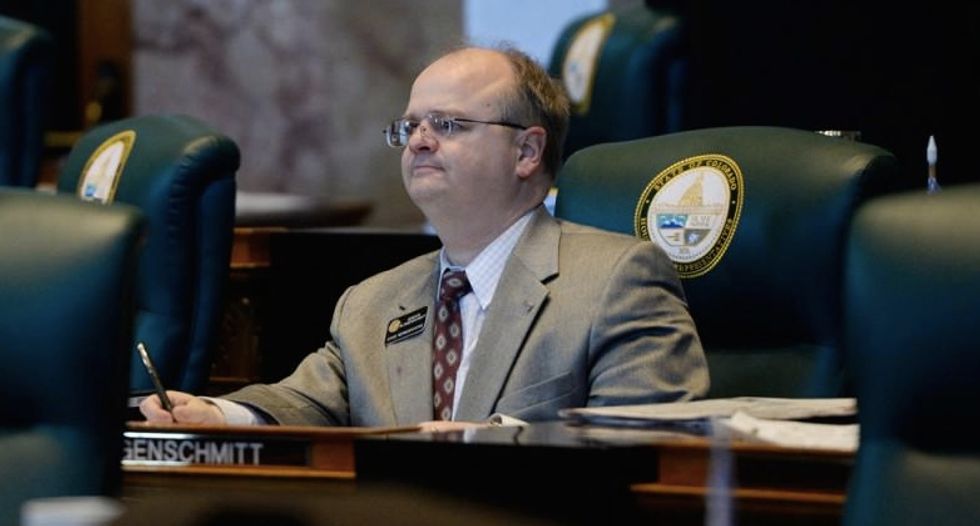 A Colorado Republican and TV evangelist calls for a new St. Patrick to expel modern-day "snakes" -- the preacher's term for gay people -- out of Ireland, Right Wing Watch reports.

During a taping of his "Pray in Jesus Name" show, which airs on an online channel called "Pray in Jesus Name News," State Representative Gordon Klingenschmitt (R-Colorado Springs) reacted to Ireland's vote this month in favor of legalizing gay marriage throughout the country.

"There was a time when it was said that St. Patrick drove the snakes out of Ireland," Klingenschmitt reminds viewers. "And now I'm concerned that the snakes have returned to Ireland. And when I say snakes, I'm not talking about physical snakes, I'm talking about the demonic spirits inside of some of the people you see parading their sin in pride around the country, rejecting not just the Catholic Church but rejecting Jesus Christ himself."

"And some people think oh, you know," Klingenschmitt continues mockingly, "the Irish Catholics they're rejecting the Pope."

"It's the young people rejecting Jesus Christ," Klingenschmitt explains, "is what's happening here," and cites a Bible verse in favor of heterosexual marriage to support his thesis.

"What God has joined together," the preacher says dramatically, "let no one separate."

"Jesus Christ defined marriage between one man and one woman," Klingenschmitt finally says in a video clip Right Wing Watch posted Friday, "and maybe it's time for another St. Patrick to go back into Ireland and preach the good news that Jesus can make you free from sin and drive out the snakes once again."

Klingenschmitt, who holds a doctorate in theology and also goes by the name of "Dr. Chaps," was in the news earlier this year for speculating that the stabbing of a pregnant Colorado woman -- which ultimately resulted in the termination of her pregnancy -- was God's punishment for abortion's legality in the United States.

Klingenschmitt has previously stated that President Barack Obama is possessed by a "demon of tyranny" which uses its human vessel to impose its oppressive scheme on American citizens. In an email to supporters during his 2014 campaign, the state legislator charged that sitting Congressman Jared Polis (D-CO) -- who is openly gay -- was on the verge of joining "ISIS in beheading Christians, but not just in Syria, right here in America." Klingenschmitt later explained that he was using "hyperbole."

With specific respect to Right Wing Watch readers, the frequent creator of journalistic content once threatened to shoot them dead. To fans of the online news outlet who might be watching his December 2013 "Pray in Jesus Name" episode, Klingenschmitt warned that he was in possession of a concealed carry permit. And, more menacingly,"even though I’m a chaplain, even though I’m a noncombatant, that I’m a 20-year military veteran and I was a nuclear missile officer and I was the captain of my high school rifle team."

“So for those of you watching on Right Wing Watch and issuing death threats against me," Klingenschmitt scolds, "just know that if you come to my home and you threaten my wife that I will defend myself and my wife,” he added. “And I’ll pray for your soul. I pray that you go to heaven. Right?”

Watch Republican state legislator Gordon Klingenschmitt refer to gay people as "snakes" and call on a reincarnation of St. Patrick to expel them from Ireland: