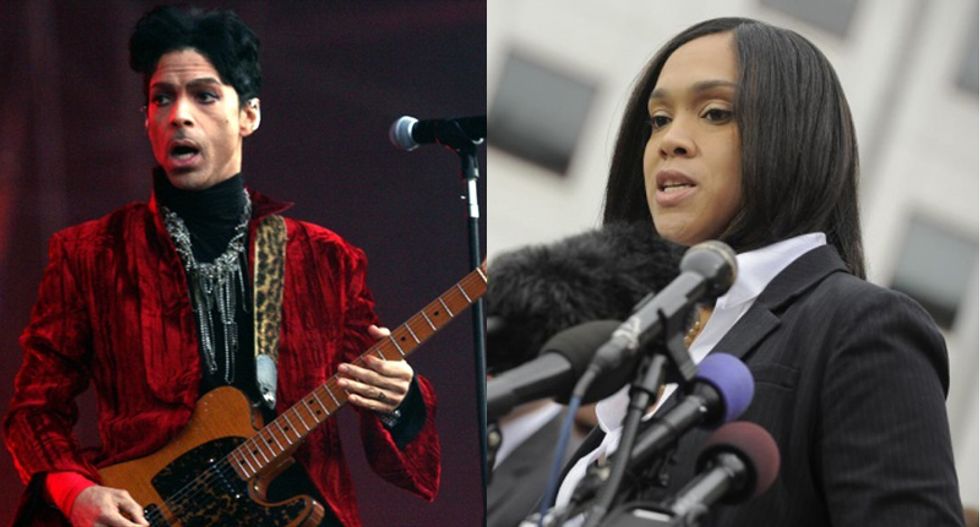 The Maryland state attorney who brought charges against the six police officers implicated in Freddie Gray's death, attended a concert by pop artist Prince, briefly walking on to the stage much to the consternation of conservatives.

According to the Baltimore City Paper, Maryland State Attorney Marilyn Mosby attended the show at the Royal Farms Arena with her husband, Baltimore Councilman Nick Mosby, after he bought her tickets as a Mother's Day present.

Prince had previously announced plans to premier the tribute song "Baltimore" at the  hastily put-together concert, with the song containing the lyrics "Does anybody hear us pray?/ For Michael Brown or Freddie Gray/ Peace is more than the absence of war."

According to the City Paper, the artist opened the show with a slowed-down version of "Let's Go Crazy" and other Prince staples before inviting the prosecutor and her husband on stage where they waved before retreating back to their seats.

Reactions from conservatives -- already unhappy that Mosby charged the officers with manslaughter following an investigation into Gray's death -- were harsh.

In an article flagged by Fox Nation, Daily Caller writer Chuck Ross wrote: "Even before appearing on stage with Prince Sunday, Mosby has been accused of making statements that were seen as prejudiced against the criminal justice system."

He added, "Another example of Mosby’s alleged bias came two days before she announced charges — and as the case was still being investigated."

Commenters at the Daily Caller were livid, with one person writing, "Just another black racist in a position of POWER (while so many claim blacks cannot be racist, they are not in positions of power).

Another wrote, "Like the majority of Baltimore pols, she is not high up on the intelligence scale. She continues to compromise her case and will insure the cops get off. I guess she is just an affirmative action graduate of law school."

"If things really get bad, the police will be staying home to take care of their families and property. The National Guard will have to be called up for containment. The idiots will be on their own, maybe a lot of ketchup will make the pilfered Air Jordans more palatable, because the food will run out quickly. Nothing will get in or out," Dave wrote. "Can you say American Spring? Just in time for Jade Helm to commence."

At conservative Twitter aggregation website Twitchy, one editor described Mosby's appearance and brief wave to the crowd as her “enjoying her time in the spotlight.”

Baltimore's police union has already asked for Mosby to step aside, questioning her fairness despite the fact that she comes from a long line of law enforcement officers.