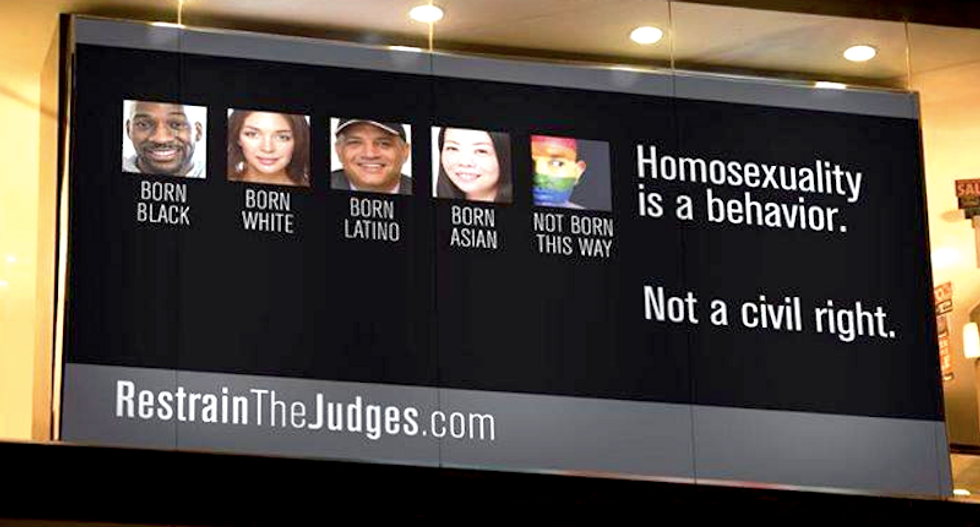 A religious right group is raising money to set up anti-gay billboards across Michigan as the U.S. Supreme Court considers arguments in a case that could overturn state bans on same-sex marriage.

An electronic billboard reading, “Homosexuality is a behavior, not a civil right,” with references to Genesis 2:24 and Matthew 19:5, has already appeared in Dearborn Heights – with more expected in Flint, Grand Rapids, and Lansing.

The group “Restrain the Judges” paid for the sign and held a rally late last month at the Michigan State Capitol.

“Join us in calling upon Congress to use the authority granted by the U.S. Constitution to restrain federal judges and the Supreme Court from undermining marriage any further!” the group urged supporters. “Defend The sovereign vote of the American People, Our State Constitution, the Sacred Institution of Marriage between One Man and One Woman, and Our Constitutionally protected First Amendment Rights.”

Mark Gurley, a spokesman for the group, said the billboards were not intended to offend anyone or even to be anti-gay.

"I believe in America it’s pretty hard to say anything without somebody being offended," Gurley said. "The issue here doesn’t have anything to do, at the end of the day, with the gay community. It has everything to do with protecting freedom of religion."

A marriage equality supporter set up an online fundraiser to buy an ad on the same sign promoting same-sex marriage.

“It was extremely upsetting to me that somebody would go that far out of their way, even though they know they are going to offend a specific demographic,” said Ferman Smith.