Creationist: If evolution is true, then it wasn't wrong for Josh Duggar to molest his sisters 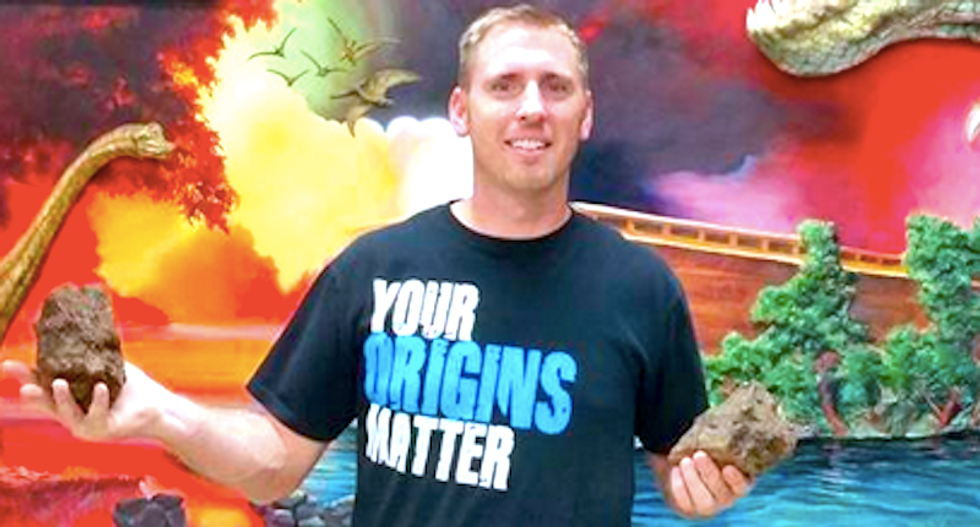 A creationism activist suggested Josh Duggar be punished for molesting his sleeping sisters and their friends by being paid to campaign against LGBT people marrying one another.

That’s exactly what the 27-year-old Duggar was doing until Thursday, when he resigned his position with the Family Research Council after admitting to “inexcusable behavior” as a teenager.

“He should be forced to push faith, family and freedom in the public showing the Christian worldview has the answers,” Hovind continued. “We should force him to get a job at the Family Research Counsel (whose) mission is ‘to advance faith, family and freedom in public policy and the culture from a Christian worldview.’ That would be a great punishment!”

Eric Hovind -- son of imprisoned creationist theme park operator Kent Hovind – said Duggar was the victim of a double standard by the media, which he said praised sins such as lust, abortion, and homosexuality but condemned “confession, judgment, and forgiveness.”

Another creationist pastor, Ray Comfort, offered his support to Duggar – who joined him last year in a street preaching video stunt.

“Standing by my friend Josh Duggar, as a brother in Christ,” Comfort tweeted. “This was in his BC days. Such were some of us.”

Comfort apparently means that Duggar, who was reared in a Christian household, molested family members and friends before he became a Christian.

The New Zealander, who encouraged Duggar family friend Kirk Cameron to become an evangelist, said he would stop watching TLC -- which suspended its popular "19 Kids and Counting" reality show after the publication of a police report that was hastily ordered destroyed Friday by a judge with political ties to the Duggar family.

“TLC knew about this back in 2006 and did not take the family off the show,” Hovind claimed. “Authorities that investigated the incident felt that it was handled in a way that no further charges were necessary.”