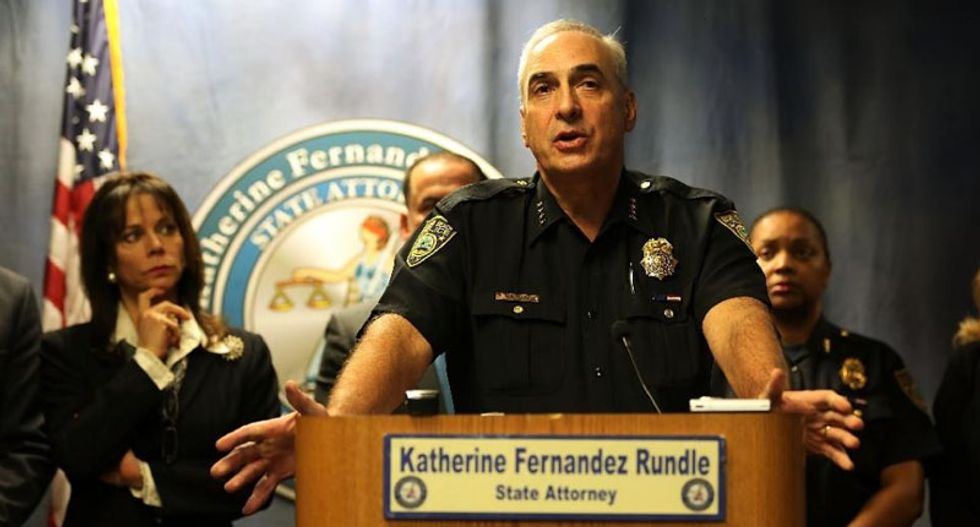 Miami Beach Police Chief Daniel Oates speaks during a news conference to announce that sixteen Miami Beach Police officers are under investigation after exchanging racist and pornographic emails on May 14, 2015 in Miami, Florida (AFP Photo/Joe Raedle)

Some of the emails included cartoon characters making offensive remarks and another featured a fictionalized board game called "Black Monopoly," in which every square said "go to jail".

"Minorities and women were being demeaned in these emails that were sent between the officers, nude photographs were passed around and emails portraying offensive sexual acts were disseminated," State Attorney Katherine Fernandez Rundle told reporters.

Two of the accused officers in Florida are no longer with the force -- one retired last year and another was fired this week in connection with the email incident. The two were the main instigators, authorities said.

The emails were sent to both personal and work accounts, and there were hundreds of messages exchanged in total, the Miami Herald reported.

In one instance, agents passed around an autopsy photo of a man controversially shot dead by police in 2011. Officials said they were investigating whether sending the picture was a criminal act.

The incident comes amid charged relations between the public and police in many parts of the US, who have been accused of using excessive force against African-Americans after the deaths of several unarmed men who were shot by officers or died in custody.

The tensions have sparked sometimes violent protests across the country, and ignited a national debate about race relations.