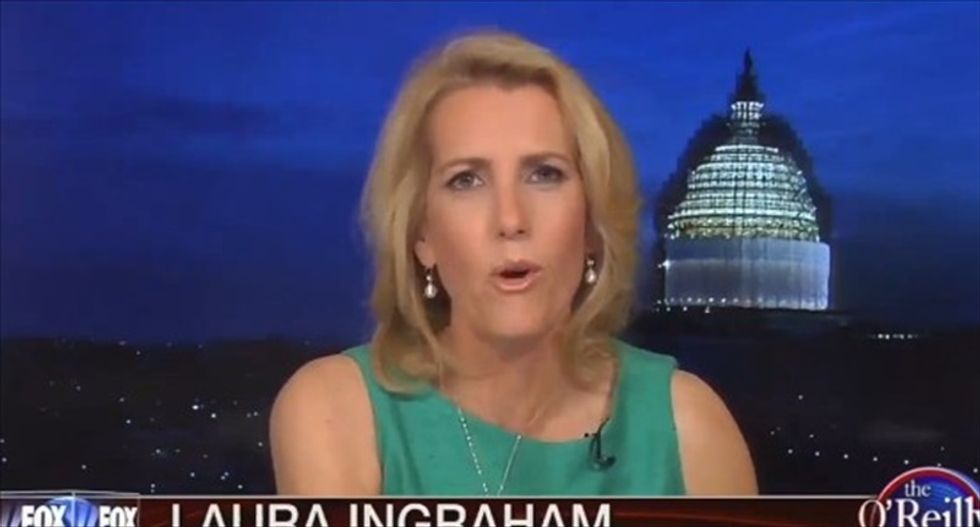 Conservative radio host Laura Ingraham, who has made a number of disparaging anti-immigrant remarks, chided anti-Islam activist Pamela Geller's on Tuesday for her event displaying pictures of the Muslim prophet Muhammed.

"There are a lot of things that we can say, that we have a right to say, that we shouldn't say," Ingraham told Fox News host Bill O'Reilly on Tuesday. "We shouldn't unnecessarily insult people, personal attacks."

Ingraham argued that, while someone might have the right to depict the Virgin Mary "smeared in dung," she would still find it rude, unnecessary and stupid.

"We as Christians, we don't go up and shoot up an artistic display in Brooklyn or anywhere else it's gonna happen," she said. "But we raise the point."

She then accused "the left" of propagating a double standard excepting Islam from the kind of criticisms other religions get, before agreeing with O'Reilly that Geller and her group, the American Freedom Defense Initiative (AFDI), acted irresponsibly in promoting the event in Garland, Texas, which ultimately resulted in the deaths of two men who opened fire outside the exhibit.

While O'Reilly was content to tell colleague Megyn Kelly on Monday that he "would have done it a different way," on Tuesday he called the AFDI's event "stupid."

"Insulting a religion with more than a billion followers worldwide doesn't advance the cause of defeating the radical jihadists," he said. "It hurts the cause, does it not?"

Last year, Ingraham made fun of immigrant children by using a Taco Bell ad, suggested that Supreme Court Justice Sonia Sotomayor is not a US citizen, and argued in favor of both mass deportations and revoking birthright citizenship as part of a plan O'Reilly described as "draconian."