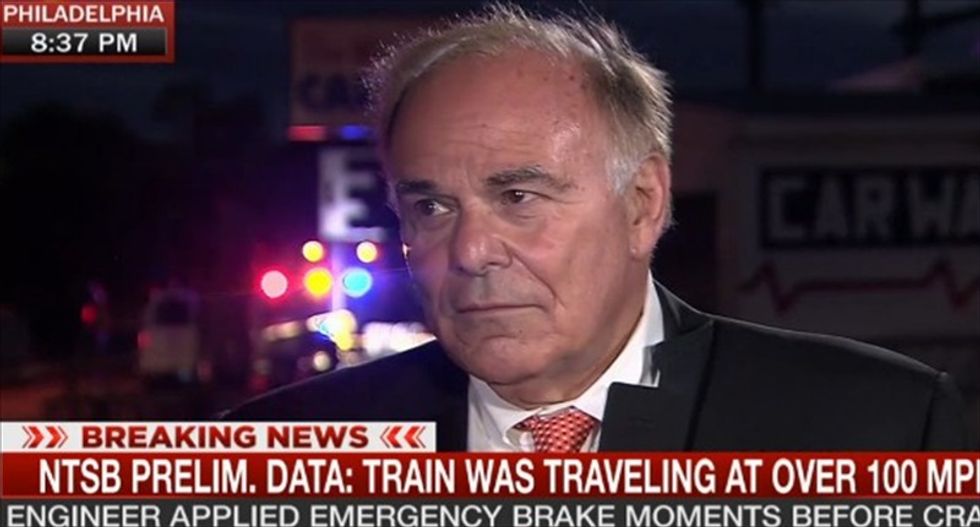 Former Pennsylvania Gov. Ed Rendell was visibly angry at House Republicans during an MSNBC interview on Wednesday, nearly cursing on-air about the GOP's plan to cut $252 million in Amtrak funding hours after a train derailment that killed seven people and injured more than 50 others.

"Those SOBs, and that's all I can call them, these SOBs didn't even have the decency to table the vote," Rendell told host Chris Hayes, who quickly responded by playing devil's advocate.

"The policy is good, or it's bad, OK?" Hayes asked. "So if I'm a Republican and I say, 'Look, we've got these budget caps, I don't think Amtrak should be getting this money, this horrible thing that happened doesn't change the way I'm gonna vote.'"

Rendell, a Democrat, responded by calling the argument of budget caps "a baloney excuse," saying lawmakers often break budget limits when it comes to defense spending.

"Their policy is terrible," Rendell said of the GOP. "This country used to have the world's best infrastructure."

According to Rendell, the World Economic Forum ranked the US infrastructure as the best in the world in its inaugural Global Competitiveness Report in 2004. Two years later, the US dropped to 12th in that category, a position it retained in the group's 2014-2015 report.

That decline, he argued, had hurt not only the country's economic competitiveness, but its public safety. A true effort to upgrade the national infrastructure, Rendell said, would create the kind of middle-class jobs many lawmakers say they want to boost.

"Their understanding of rail traffic is unbelievable," Rendell told Hayes, citing an exchange with Alabama Republican Sen. Jeff Shelby during his time as governor.

"Senator Shelby said, 'You're asking us to subsidize Amtrak,'" Rendell recalled. "I said, 'Senator, there isn't a rail system in the world that isn't subsidized. What are these guys smoking?"

"You have no idea, no idea what caused the accident," Simpson said, adding, "Don't use this tragedy in that way, it was beneath you."

Watch the interview, as aired on MSNBC, below.