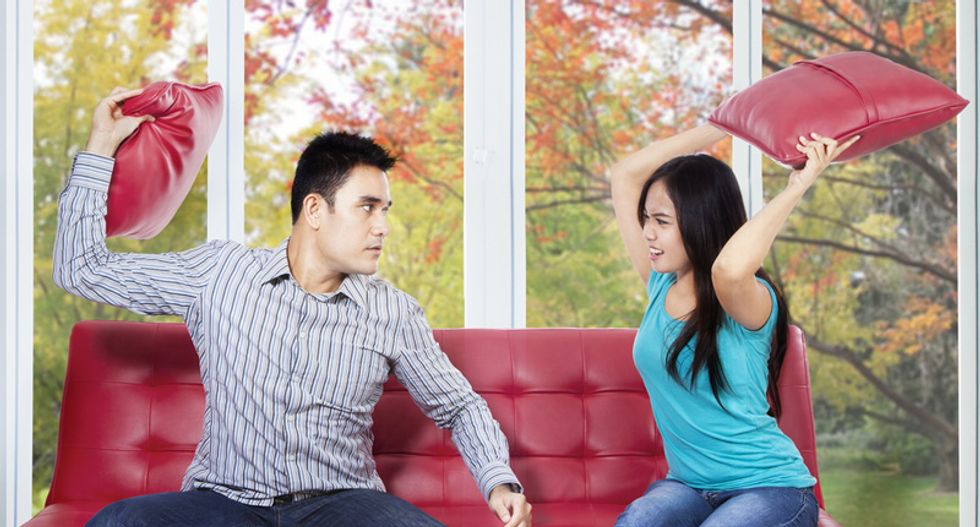 Having lost in small claims court over a damaged throw pillow, a California dry cleaner is conducting a long term campaign against a customer she dispargared as a "sodomite."

According to the Huffington Post, Byron Batista took several throw pillows to North Hollywood's Rosali Cleaners last January for cleaning, only to discover one of them was damaged when he came to reclaim them.

The owner, identifying herself as Rosali, refused to compensate Batista for the damage before the argument turned ugly when the woman started hurling gay slurs at the man.

"She started saying, 'Fuck you, fuck you, fag,'" Batista explained. "That's when she took her middle finger and mimicked putting it up her butt."

After a judge ruled in Batista's favor -- awarding him $75 -- he thought his battle with the dry cleaner owner was over, but Rosali decided to not accept losing  gracefully.

Batista received a check for the full $75, however it was made out to Byron "the buggerer" Batista, prompting the man to return to the judge.

Ordered to issue a new check, Batista received a money order made out to "Batista, Byron (SODOMITE)."

"I took it to the bank and the teller went, ‘Oh, my God!’" Batista said. "She sat down and wrote a letter to the judge saying they can’t accept money orders with foul language on them."

According to Batista his troubles have not ended and now he must return to the judge again.

Noting that the dry cleaner is in Hollywood -- and specializes in leather -- Batista said, "You'd think a place that cleans leather would expect to deal with some gay people."

He added, "I don’t want anybody spending their money there."

Heidi Ganahl, the best-known Republican candidate for Colorado governor, during a recent event with supporters endorsed the work of a Colorado-based conspiracy group that rejects the results of the 2020 election, according to a recording of her comments obtained by Newsline.

The event, a meet-and-greet in Durango, occurred on Nov. 18.

Laurie Roberts, columnist for the Arizona Republic, examined the dynamics on Wednesday under the headline, "Kari Lake just got schooled (and by her fellow Republicans).

Rep. Madison Cawthorn (R-NC) appears to have violated congressional rules by inviting a Republican candidate onto the U.S. House floor.

Republican lawmakers were surprised to see House candidate Robby Starbuck, of Tennessee, on the floor during votes Tuesday evening, and they told The Hill's Scott Wong the GOP hopeful had been invited there by Cawthorn.