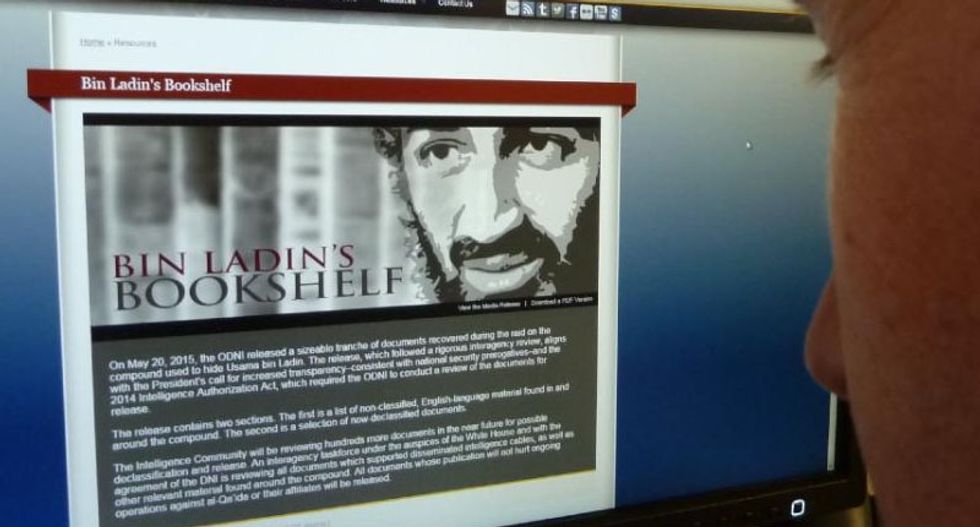 An AFP journalist looks at a page displayed on the website of the Office of the Director of National Intelligence May 20, 2015 in Washington (AFP Photo/)

Low-hanging clouds over the Pakistani mountains might protect you from a prying US drone, but what if a spy has injected a microscopic bug in your wife's clothes?

Osama Bin Laden's last years at his final hideout were haunted by his accurate hunch that he was hunted by a remorseless and technologically advanced foe.

As he tried to gather his family around him in his Abbottabad compound, he issued ever more detailed instructions as to how they were to avoid leading US agents to him.

According to a letter that was declassified on Wednesday and provided by the CIA to AFP -- which cannot independently confirm its authenticity -- Bin Laden warned one of his wives travelling from Iran to rejoin him to take special care.

"Before Um Hamza arrives here, it is necessary for her to leave everything behind, including clothes, books, everything that she had in Iran... Everything that a needle might possibly penetrate," Bin Laden wrote, in a letter dated September 26, 2010.

"Some chips have been lately developed for eavesdropping, so small they could easily be hidden inside a syringe," he said, according to the CIA's own translation.

"Since the Iranians are not to be trusted, it is possible to implant a chip in some of the belongings that you might have brought along with you."

The letter was one of scores seized along with other intelligence materials when US commandos stormed the Abbottabad compound on May 2, 2011 and shot Bin Laden dead, the end of a long hunt for an elusive foe.

Bin Laden's Saudi wife Khairiah Sabar -- known by the honorific Um Hamza as the mother of the Al-Qaeda's leader's favorite son -- was eagerly awaited, but security was total.

Nevertheless, she was one of three Bin Laden wives present when US Navy SEALs stormed the house. She was left behind and later arrested by the Pakistani authorities.

In other letters, Bin Laden tries to explain to his sometimes reluctant lieutenants why security is paramount, even when it makes running a global jihadist operation harder.

"Concerning using the Internet for correspondence, it is OK for general messages, but the secrecy of the mujahideen does not allow its usage, and couriers are the only way," he wrote.

This did not go down well with his right hand man, Atiyah Abd al Rahman, a commander known in Al-Qaeda as Mahmud.

"The issue is highly complicated. How can we correspond with brothers in Algeria, Iraq, Yemen and Somalia?" he demanded in one letter, pushing to use online communication.

"Sometimes there is no other means after taking precautions. As for Iraq, we will try, but it is too difficult."

But Bin Laden was implacable on the subject.

Reportedly, it was by tracking one of Bin Laden's couriers to Abbottabad that the CIA was eventually able to pinpoint his location -- there was no electronic communication from the house.

But Al-Qaeda's security policies went further than that.

"Our security situation here does not allow us to go to doctors, so please take care of all your medical needs, particularly your teeth, and keep the prescriptions from every doctor you go to so we can get the medication when you come to us," he wrote.

And he also warned his mainly Arab allies: "It is also of extreme importance, security-wise, to learn Urdu."

Bin Laden also recommended telephone SIM cards be regularly destroyed and replaced, declaring with misplaced confidence "the facts show that American technology and advanced systems cannot capture a mujahid if he does not make a security violation."

As a reminder, one of the declassified documents is a list of Al-Qaeda cadres who were killed or captured in the wake of the 2001 collapse of Afghanistan's Taliban regime.

Next to each name is the error that spelled their doom: One group was bombed after using a satellite phone, another had associated with known Pakistani agents, others gathered too many vehicles in one place even when a US AC-130 Spectre gunship was overhead.

As surviving Al-Qaeda members regrouped in Pakistan, the US weapon of choice against them was the drone. The only defense the militants could think of was a cloudy sky.

Thus, in a letter dated November 24, 2010, Mahmud reassures Bin Laden that his wife won't set off on the road until a "convenient cloudy day."

Ironically, all his precautions would come to naught: Mahmud himself died in a drone strike in August 2011, three months after his cautious leader's demise.

According to The Arizona Republic, a top GOP regulator in Arizona has been promoting conspiracy theories and falsehoods about the COVID-19 vaccination in discussions with the companies he is overseeing.

"Arizona Corporation Commissioner Jim O'Connor, a Republican who was elected in November, told The Arizona Republic in an interview that the government and news media are covering up deaths and other harms caused by the shots," reported Ryan Randazzo.

On Saturday, The Times of Israel reported that Camp Hikon, a planned Orthodox Jewish summer camp in upstate New York, has stated its plans to bar vaccinated children or counselors from the facility — and that their website is laden with conspiracy theories and misinformation about COVID-19.

"Advertisements for Camp Hikon, planned for upstate New York, appeared on email listservs popular in the Orthodox Jewish community just days after a private school in Miami made news for discouraging teachers from getting the vaccine and telling children they were not to have contact with vaccinated people," reported Shira Hanau. "The camp's announcement also comes as posters encouraging people not to get the COVID-19 vaccines appeared in Midwood, Brooklyn, the Orthodox neighborhood where one member of the founding team runs a natural foods store."