Fight for $15: Thousands of fast-food workers protest ahead of annual McDonald's meeting 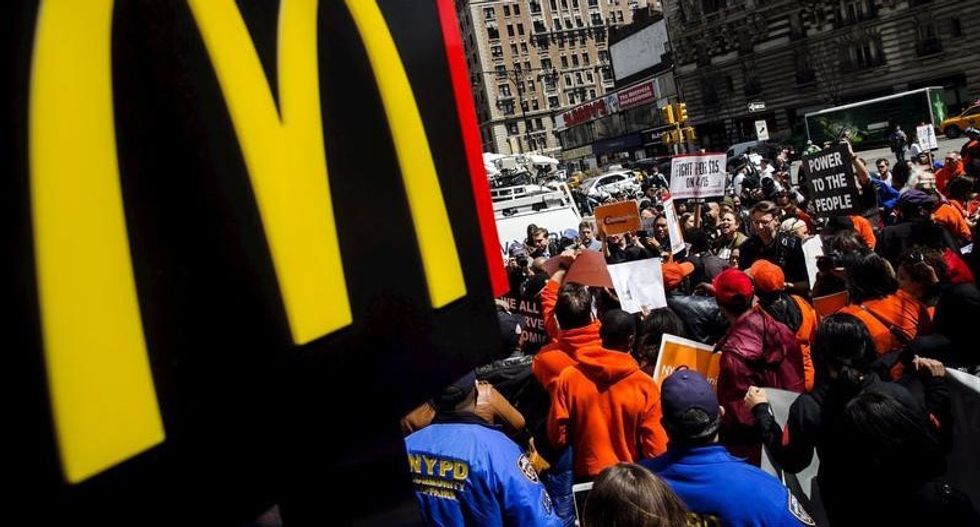 File photo of protesters demonstrate in front of a McDonald's restaurant asking for higher wages in the Manhattan borough of New York City April 15 2015. REUTERS/Lucas Jackson

Thousands of McDonald's workers seeking a minimum wage of $15 per hour and the right to unionize are expected to swarm the fast-food giant's headquarters for two days of protests that will coincide with the fast-food chain's annual meeting on Thursday.

Protests by low-wage fast-food and retail workers have helped fuel a national debate about pay levels. Companies such as McDonald's Corp and Wal-Mart Stores Inc are raising starting pay and cities like Seattle and Chicago are boosting their respective minimum wages over time.

Oak Brook, Illinois, police are preparing for thousands of demonstrators on Wednesday at the chain's suburban headquarters west of Chicago, and a smaller crowd in the hundreds on Thursday, said Officer Garrett Church.

In one of his first major announcements as the new chief executive of McDonald's, Steve Easterbrook last month said that starting pay at company-operated restaurants would be set at $1 above the locally mandated minimum wage, beginning on July 1. By the end of 2016, McDonald's expects the average hourly pay rate to be above $10 per hour.

Those increases only apply to some 90,000 workers at the roughly 1,500 U.S. restaurants McDonald's operates. They do not affect around 660,000 other restaurant workers employed by U.S. McDonald's franchisees who operate about 12,500 restaurants.

Some workers were quick to criticize the announcement. They said it was too little to make a real difference and affected too few workers.

The decision also angered some McDonald's restaurant operators, who said it would put additional cost pressure on franchisees struggling to maintain profits at a time when sales have been weakened by intense competition and internal missteps that have slowed service.

This week's protests are backed by the Service Employees International Union (SEIU), which has spent tens of millions of dollars so far on a three-year campaign to improve conditions for low-wage retail and fast-food workers.

Twenty-nine states and Washington, D.C. currently have minimum wages above the federal minimum of $7.25 per hour, according to the National Conference of State Legislatures.