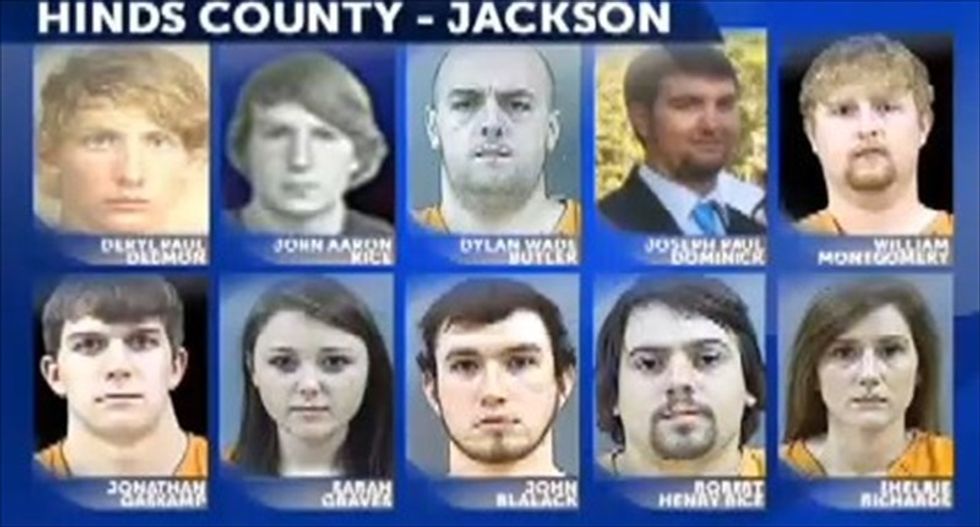 The last of a group of 10 young white defendants was sentenced on Friday for his role in a string of racially motivated assaults on black people in Mississippi, which ended with a horrific killing that echoed the worst violence of the civil rights era.

Robert Rice, 24, was ordered on Friday in Jackson, Mississippi, to serve 10 years in prison, the maximum sentence on charges of a felony hate crime and aggravated assault.

He took part in a series of forays from the suburbs, where the then teenagers lived, into the city, looking for random opportunities to attack African Americans, the court heard.

Despite taking part in three episodes of racist violence, Rice was not present on the night of the final episode prior to the group being apprehended, in June 2011, when others of the group encountered 49-year-old James Anderson in the parking lot of a motel on the outskirts of Jackson, beat him viciously, then fatally ran him down with one of their vehicles.

Rice’s cohort Deryl Dedmon, who was 18 at the time, drove the pick-up truck that killed Anderson. He was sentenced to 50 years in February. He had at first denied the crime but later pleaded guilty to charges including a federal hate crime, conspiracy and murder.

Three others from the group were sentenced to between 18 and 20 years in earlier hearings, and prison terms for the others charged ranged from four to eight years.

The court heard on Friday that an 11th suspect may be brought before a court in due course – a juvenile who is also accused of being involved in racial attacks with the group. No more details were given in court.

“These are thugs, that is the only way to describe them,” Judge Henry Wingate said of Rice and his co-defendants at Rice’s sentencing on Friday, according to the Clarion-Ledger, the Jackson-based daily newspaper and news website.

“This defendant came to Jackson multiple times to enjoy this aspect of ‘fun’ that they were going to perpetrate on innocent African Americans,” the judge continued.

Another judge in a previous hearing involving some of the co-defendants said the youths’ actions had set back progress on race relations in Mississippi in a shocking case to add to a long history of hate crimes in the southern state, ranging from slavery until the mid-19th century to serial lynching in the 1950s and 60s.

On Friday, Judge Wingate added: “Mississippi has a sordid past with race relations and most citizens have tried to turn a corner.”

The court had previously heard that Rice had been involved in an incident with some of the other defendants where he was at the wheel of a car in which he attempted to run over a black man. Other crimes had included beating people up and attacking them with beer bottles and slingshots, with the victims always being African American, though James Anderson is the only victim to be named publicly.

The behavior of the group of racist teens became national news when some of them decided to head from a party on the outskirts of Jackson into the city in two pick-up trucks to look for a fight in the summer of 2011.

James Craig Anderson was apparently the first black man they encountered when the group exited an interstate highway leading into the city and saw the 49-year-old car factory worker outside his car in the parking lot of a motel.

The teens pulled up and some of them chased Anderson and beat him to the ground.

Earlier court proceedings heard that Dedmon pummelled Anderson with his fists as he lay on the ground. Then the friends got back into their pick-ups and one of the vehicles drove away.

A surveillance camera mounted on the wall of the motel caught what happened next.

Anderson had struggled to his feet and can be seen on the video, which was later obtained by CNN and AP, among others, staggering back into the parking lot.

The vehicle, driven by Dedmon, reverses briefly and comes to a halt then accelerates swiftly and smashes straight into Anderson, who was instantly knocked flat and, the court later heard, died in the parking lot as the teens drove away at high speed.

At Dedmon’s sentencing, Anderson’s partner, James Bradfield, told the court the couple’s young son now insisted on sleeping in his bed to protect him because, Bradfield said, “he doesn’t want those people to get me”.

After Rice’s sentencing on Friday, Anderson’s sister Barbara Anderson Young told the Clarion-Ledger the family was “overwhelmed” but pleased to have the case largely behind them.

The family had earlier asked the court not to seek the death penalty for Dedmon because it had historically been overused to execute blacks accused of killing whites and they did not think capital punishment in this case would do anything to reverse history’s statistics.

Watch a report on Rice's sentencing, as aired on WJTV-TV on Friday, below.