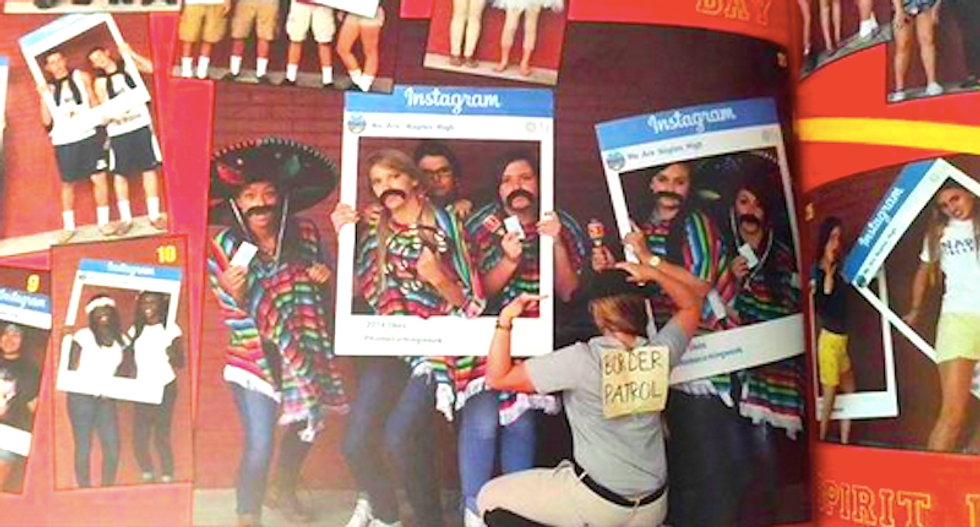 A Florida high school published a yearbook photo showing students dressed up in ponchos, sombreros, and fake mustaches while other students pose as border patrol agents.

Jessica Morales, a Hispanic student at Naples High School, said the image – and the school’s apparent endorsement of its message – upset her, so she shared the photo on social media in hopes of getting answers from administrators, reported WFTX-TV.

"It was just really offensive because it kind of belittles the whole issue," said Morales, an 18-year-old senior.

A friend who lives in Texas also shared the photo on Facebook and Twitter, helping the image go viral.

"I was in some way shocked that Naples High School would put in the yearbook as like this is a highlight of something they did this year," said friend Kristen Perez.

Morales said she was baffled that school administrators would allow the photo – taken during spirit week – to be published in the $90 yearbook, but a spokesman said the vetting process for publication apparently did not work as intended.

“If anyone on the yearbook team finds a picture questionable, the yearbook sponsor brings it forward to Principal (Kevin) Saba,” said Greg Turchetta, spokesman for Collier County Public Schools. “That regrettably did not happen in this case.”

The principal said he regretted that anyone was offended by the image, but none of the six students shown in the photo will face disciplinary action.

"It's really racist, I can tell you that," said Miguel Morales, the student’s father. "I've never seen anything like that – I thought it was 2015 and people don't act like that."