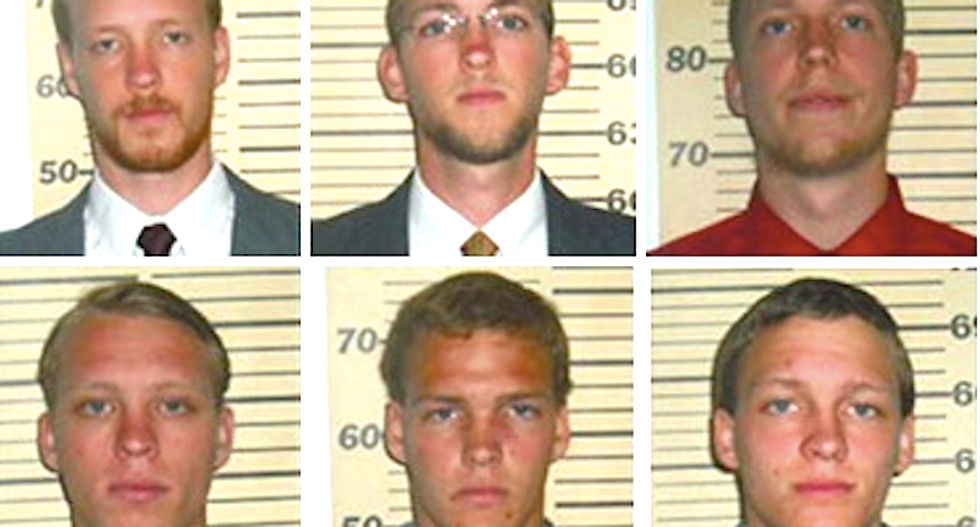 Four homeschooled brothers pleaded guilty Thursday to molesting their younger sister from the time she was 4 years old until she was almost 15 – and their parents and two other brothers still face charges related to the case.

The oldest brother confessed in December 2012 to molesting the girl after becoming a born-again Christian, and a pastor from the Baptist church in Wake Forest, North Carolina, contacted authorities the following day.

"He confided in his pastor and his pastor told him that was wrong and not the way normal families are,” said Perquimans County Sheriff Eric Tilley.

Eric Jackson, then 25, told authorities that he and all five of his brothers had sexually abused their younger sister for a decade, and authorities say their parents knew but did nothing to stop the abuse.

An elder at Hope Baptist Church, which Jackson and another brother attended, compared the pattern of abuse to other "horrible" sins such as adultery and homosexuality.

"If Jesus had not saved Eric, perhaps the devastating culture of this family could have continued, even to more generations," wrote elder Scott Brown. "But the gospel transforms and shines light in dark places. Jesus was the source of light that caused things to be brought into the light."

Eight of the family’s 11 members have been indicted in the case -- which bears similarities to newly revealed claims that reality TV stars Jim Bob and Michelle Duggar may have covered up their eldest son's molestation of his sisters and other girls.

The victim in the Jackson case told investigators that she believed she would go to hell if she told anyone about the assaults, which she said took place at least twice a week.

Eric Jackson and the second-oldest brother, Matthew Jackson, each pleaded guilty to first-degree sex offense and were sentenced to 12 to 15 years in prison.

The brothers tearfully begged for the victim’s forgiveness during the court hearing, and they said they would do whatever God called them to do in hope of making the situation right.

“Forgiveness is not mine to give – it’s God’s,” their sister said. “You need to take it up with Him.”

Two other brothers, Nathaniel and Benjamin Jackson, each pleaded guilty to multiple counts of incest and were sentenced to up to 24 months in prison, followed by 36 months on probation.

The case against a fifth brother, Jon Marc Jackson, was delayed until July because his attorneys believe the judge had a conflict of interest, but prosecutors said he also will plead guilty in the case.

Aaron Jackson declined a plea agreement and will stand trial next year.

The parents, John and Nita Jackson, were charged with child neglect, child abuse, and accessory to sexual abuse and will remain jailed until their next court hearing in August.

The girl told authorities her mother had witnessed at least one assault and walked away.

After the eldest brother -- who was the first to abuse his sister -- contacted authorities, the parents fled with the victim to Colorado.

But the family was tracked down, and the girl was taken into custody by the Department of Human Services and confirmed the confessed claims of her brothers.

Tilley, the sheriff, said the family was “bizarre” and the father held "anti-government" and "anti-school" beliefs.

The eldest brother had difficulty writing his own name when he met with investigators.

"The children were home schooled with very limited education," Tilley said. "They were very private and the whole yard has a fence around it -- like a little compound. They're very different."