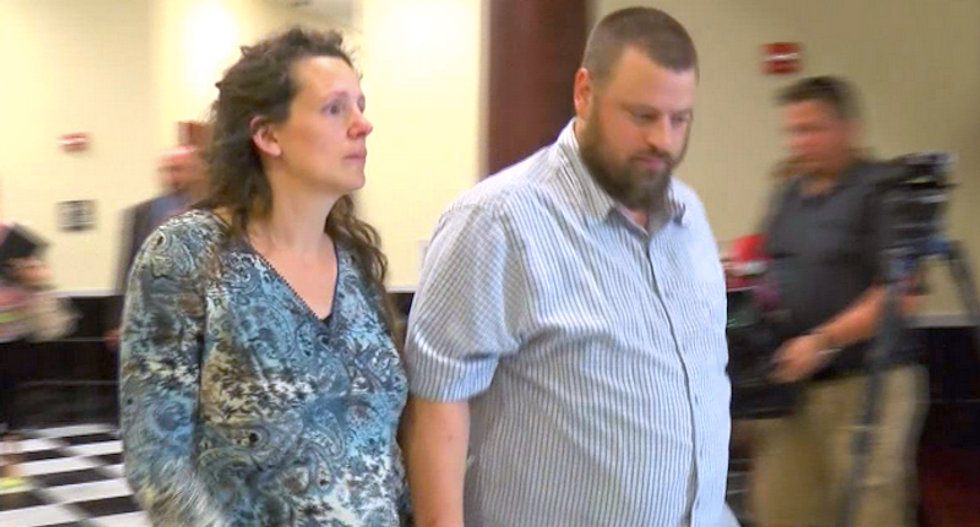 A Kentucky “free range” family won’t regain custody of their 10 children this week, following a court hearing Monday as part of an investigation launched after the father was accused of threatening a neighbor with a gun.

Joe and Nicole Naugler blog about their “off-the-grid” lifestyle in rural Breckinridge County, saying they and their children decided together to live self-sufficiently on a 27-acre farm.

But a complaint lodged with authorities says the couple, who are expecting another child late this summer, live in a makeshift tent without running water amid heaps of trash and other safety hazards.

Their children do not attend formal school, and the parents say they follow the “unschooling” method of allowing children to learn through practical life lessons – although it’s unclear whether they have complied with state minimum standards for homeschooling.

Their case has drawn international attention as the couple claims their constitutional rights were violated during the investigation, although no supporters showed up for the court hearing.

The family court hearing was closed to the media and the public because the case involves juveniles, but Joe Naugler’s adult son said afterward that he testified during the hearing.

Alex Brow, 19, said he had not seen his father since he was removed from his care at age 4, but he said he feared for his half-siblings’ safety.

"He's a very mean man,” Brow said. “He likes to feel power and he likes to manipulate people. If it's not his word, it's no one's word."

Brow said he did not live in primitive conditions like his younger siblings, but he claims his father physically, mentally, and sexually abused him until he was placed in foster care.

"I got all the beatings, I got most of the mental abuse -- there was a lot of sexual abuse towards me,” Brow said. “We had a very dysfunctional relationship.”

"We are heartbroken with the way Alex's upbringing away from us and his strained relationship with his mother have affected him," he said.

The Nauglers claim they allowed authorities access to their property and children during the investigation, but the sheriff said the family had been uncooperative during multiple interactions with law enforcement.

"This could have gone a different route, but their unwillingness to cooperate is what caused some of this," said Breckinridge County Sheriff Todd Pate.

Pate said his department had received email and phone threats related to the case.

"People are hearing one side of the story,” Pate said. “I'm not entitled to tell the rest of the story.”

The couple has raised about $40,000 to help with their legal defense, which has drawn the support of the Home School Legal Defense Association.

The Nauglers are each due in court Tuesday on misdemeanor criminal charges.

Joe Naugler was charged with menacing after a neighbor accused him of threatening her with a gun after she caught him trying to steal water from her well.

Nicole Naugler was charged with disorderly conduct and resisting arrest after authorities said she tried to interfere with the investigation and dared deputies to shoot her.

Their next hearing in the child custody case is scheduled for May 18.