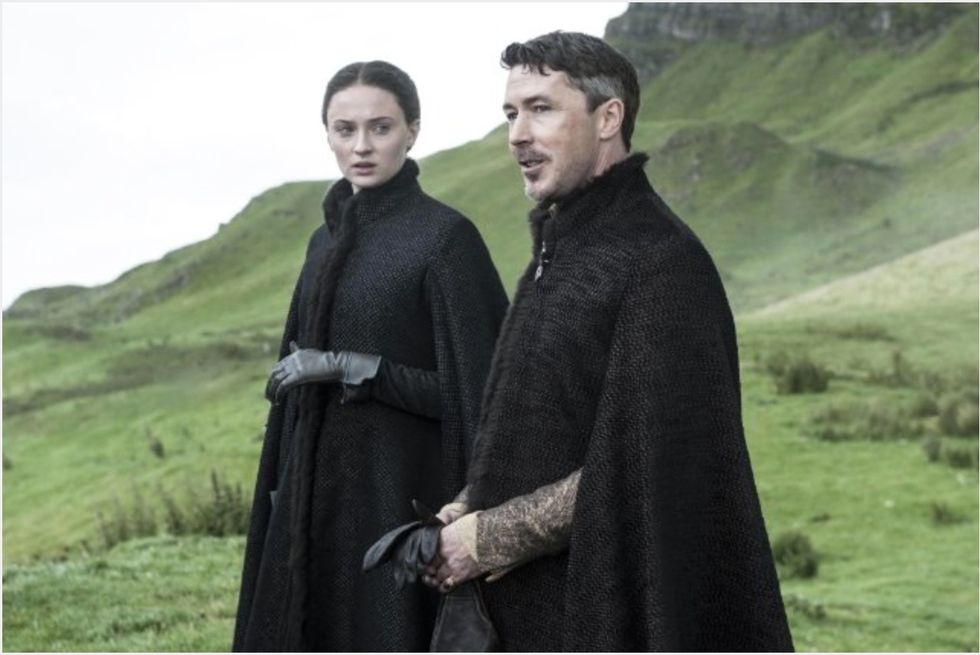 I've said my piece on the rape scene on Game of Thrones and continue to be annoyed at fans who are routinely surprised and outraged when the show does what it's supposed to do, which is subvert fantasy tropes that we've been conditioned to accept unthinkingly: That the sharp underdog will beat the bully (subverted by Oberyn/Clegane), that the protagonist will make a daring last minute escape (Ned Stark's execution), that our naive but valiant hero will save the day and achieve victory (Red Wedding), that the  scrappy tomboy will become an morally unambiguous badass (Arya becoming instead someone who likes killing). Now they've subverted the trope where nothing too bad can happen to the princess locked in the tower before her gallant knight rescues her. The only surprise is that people are surprised, showing how much the cliches of fantasy fiction have shaped our expectations.

But all that said, I want to talk about another cliche that the show has really been subverting beautifully, with very little commentary on it: The way that the Nice Guy narrative is being subverted through the character  of Littlefinger. We all know this story of the Nice Guy: He's not as rich or strong or handsome as his romantic rival, but he Truly Loves the heroine, and, because he doggedly persists her, even after she puts him off, he eventually wins her love. It's a narrative that rewrites obsession as romantic and treats the desire to control and "win" another human being as if it's love.

As Marc and I note on this week's House Slate, Littlefinger loves to advance this narrative, but in reality, he is not that way at all. Go watch that video and come back and I will explicate some more.

So ingrained is this narrative that I frequently see fans take it on face value when Littlefinger says he loved Catelyn. He may even believe, on some level, that he does feel that way. But let's judge his "love" by his actions, shall we? Here is a list of everything that Littlefinger, cobbled together from both books and show, does to the woman he supposedly loves:

Why does Littlefinger fixate on Catelyn Tully? It's not because of who she is as a human being. It's because of what she represents: She's the daughter of a great house and, if he managed to marry her, that would have been proof that he's a big, important man. It's much like the trope of the nerd who crushes on the cheerleader. They don't have anything to talk about and he doesn't actually care for her much as a person at all. It's just that she's a trophy he wants to win to show all those jocks that make him feel insecure what a big man he is. If Littlefinger was a real person, he'd be an avid member of the Red Pill forum on Reddit. He'd be a ringleader of Gamergate. He'd be bragging about how he "scored" a HB8 redhead named Sansa by shutting out all possible avenues of escape, and then showed her who was boss by passing her off to a buddy of his. He's be writing a pick-up artist guidebook on how to score with any woman you want by framing her for murder.

That's why I love this series. Littlefinger is so beautifully written that plenty of Red Pillers watch this show without even realizing that they're being mocked. It shows how this story runs a lot deeper than a lot of people realize, which is why it's important to really think deeply about what they're doing before reacting.

Except when it comes to that horrible Cersei/Jaime rape scene. It's clear the director screwed that up, so it's time to just retcon that an pretend it didn't happen.