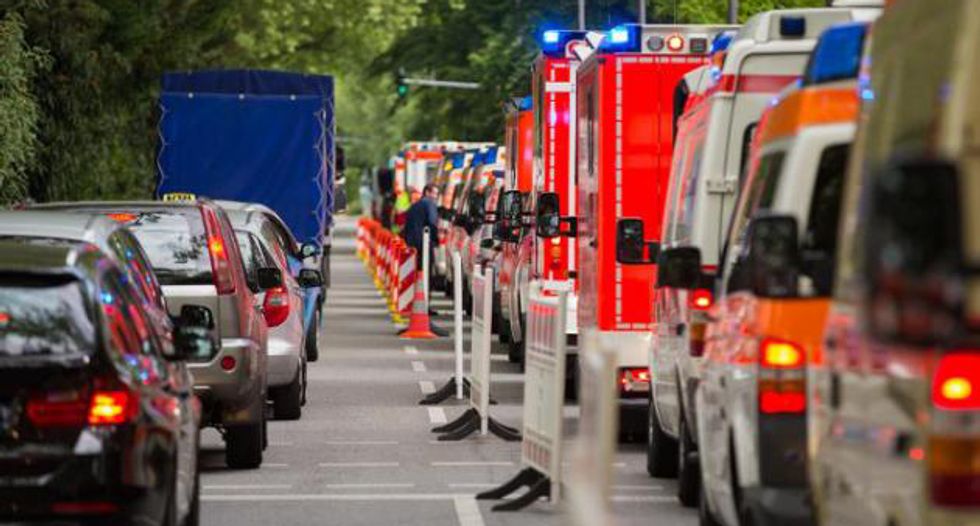 Ambulances line up in front of a building of social services during an evacuation of 20,000 from their homes in Cologne, western Germany, on May 27, 2015 (AFP)

German authorities evacuated around 20,000 people from their homes in the western city of Cologne Wednesday before defusing a World War II bomb unearthed during construction work.

Residents living within a kilometre (about half a mile) of the site were told to leave their homes, among them around 1,100 people from a large old people's and care home, city officials said.

Schools in the area as well as Cologne Zoo, also within the danger zone, were closed for the day.

The unexploded US-made device, which lay five metres (16 feet) underground, was discovered on Friday on the left bank of the Rhine river near Muelheim bridge, city officials said.

Hundreds of police, firefighters and other helpers were involved in clearing the area for the city's largest evacuation since the end of the war.

River traffic had to be halted during the afternoon operation to de-activate the one-tonne bomb, while the airspace above the zone was also closed.

"Everything went well," Cologne city hall said in a statement afterwards, adding that the bomb was "successfully defused".

Residents began returning to their homes in the early evening.

Seventy years after the end of fighting, parts of Germany remain riddled with unexploded bombs from the Allied campaigns, and construction workers regularly stumble upon them.