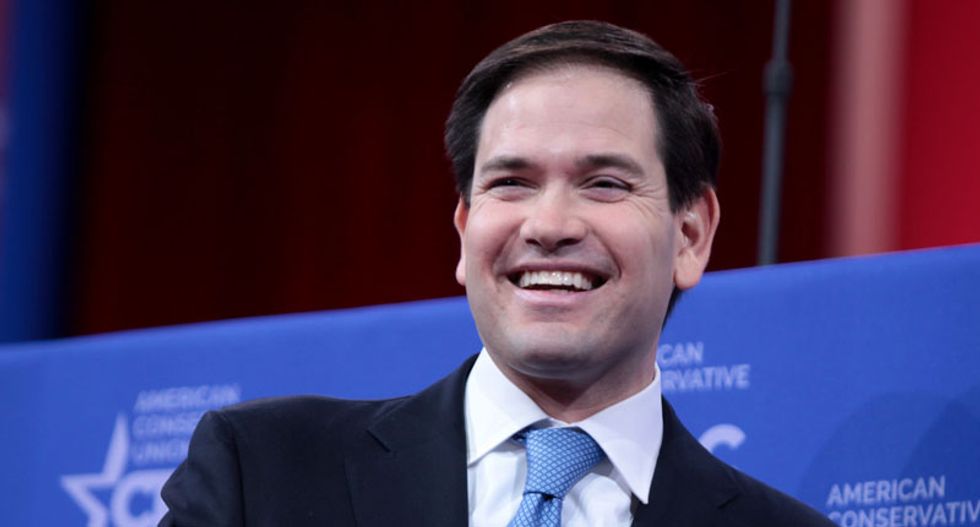 A bill that would allow Congress to review the Obama administration’s nuclear deal with Iran has fallen victim to presidential politics, as a trio of Republican senators seeking the White House have seized on the debate as a messaging opportunity for their foreign policy agendas.

The Florida senator Marco Rubio, who launched his presidential campaign earlier this month, is leading the pack with seven amendments to the Iran sanctions bill. The most contentious would force Iran to recognize Israel’s right to exist, a measure that the Iran bill’s proponents have warned could scuttle both the compromise in the Senate and the Obama administration’s broader negotiations.

But Rubio, who has cast himself as the GOP’s most hawkish candidate in 2016, showed no signs of backing down on Wednesday in a fiery speech demanding a vote on his amendments. Rubio strongly disputed that his amendment related to Israel’s right to exist would unravel a historic nuclear deal with Iran.

“Somehow I’ve been told that this is going to box the White House in. If it does, it boxes them in with their own words,” said Rubio, who sits on the Senate foreign relations committee and voted last week in favor of advancing the bill outside of the panel.

The Iran bill, a carefully crafted bipartisan agreement, would provide Congress with the ability to review the nuclear accord and give lawmakers 30 days to pass a resolution of disapproval of any final deal. If US lawmakers passed such a resolution, Barack Obama would be unable to waive some of the congressional sanctions on Iran.

The Tennessee senator Bob Corker, the chairman of the foreign relations committee, has said the legislation has the 67 votes required to override a presidential veto in its current form. As a result, both Corker and Republican leaders have urged Rubio and Senators Ted Cruz and Rand Paul – also 2016 candidates – to withhold so-called “poison pill” amendments that would revive a veto threat from the White House.

Cruz filed an amendment last week that would require congressional approval of any Iranian nuclear deal before sanctions relief can occur – essentially granting lawmakers an up or down vote on a final agreement. Paul has not offered any amendments to the Iran bill yet, but is eyeing a debate over the National Security Agency’s bulk surveillance program as lawmakers near an end-of-May deadline to renew central components of the USA Patriot Act.

The Obama administration has made clear that if any Republican amendments geared toward upending the deal make their way into the final bill, the president will rescind his support for it.

“There will be a lot of pretty awful amendments, quite frankly,” Wendy Sherman, a top official at the State Department, said Monday . “The president has said that if the Corker-Cardin legislation stays where it is, he will not veto it. If it becomes something else, then he’ll have to consider his options.”

As many as 60 amendments have been filed, but it’s unclear how many, or which ones, will come to the floor for a vote. The Senate rejected one amendment on Tuesday, offered by the Wisconsin senator Ron Johnson, that would have required any nuclear deal with Tehran to be considered an international treaty.

The Senate majority leader, Mitch McConnell, said on Tuesday he expected lawmakers to work with the bill’s sponsors – Corker and Maryland Senator Ben Cardin, the ranking member of the foreign relations committee – to schedule votes.

Cardin pushed back against Rubio’s Israel amendment on Wednesday, telling the Florida senator on the floor that the bill already states – at Rubio’s request – that the president “should determine the agreement in no way compromises the commitment of the United States to Israel’s security nor its support for Israel’s right to exist”.

But Rubio is seeking public recognition from Iran’s leaders that Israel has a right to exist as a Jewish state, a notion that Obama said this month is “akin to saying that we won’t sign a deal unless the nature of the Iranian regime completely transforms”.

Rubio’s amendment would put lawmakers in a tricky position, given their strong ties to Israel. Democrats in particular would be pressured to buck the White House and vote for the amendment, despite the concerns raised by the administration.

“I hope that we will be able to move on these amendments. I don’t think they undermine this one bit,” Rubio said on the floor. “It’s about time that this body takes this up.”

For Rubio, the Iran debate offers the first real test since he declared his candidacy to flex his political muscle. Much of Rubio’s 13 April announcement speech in Miami centered on the need for a new direction in America’s foreign policy. Failing to procure even a vote on one of his amendments would, at the very least, raise questions about Rubio’s effectiveness.

Corker has remained optimistic that he can fend off politically charged amendments but would not predict how exactly the process will play out. He received an unexpected boost from the American Israel Public Affairs Committee, the largest pro-Israel lobby in Washington, which has been rallying pro-Israel Republicans behind the scenes against controversial amendments.

Corker told reporters on Wednesday he was taking things one day at a time. “I hope we’re going to end up with a bill that will become law and that’s the goal,” he said.