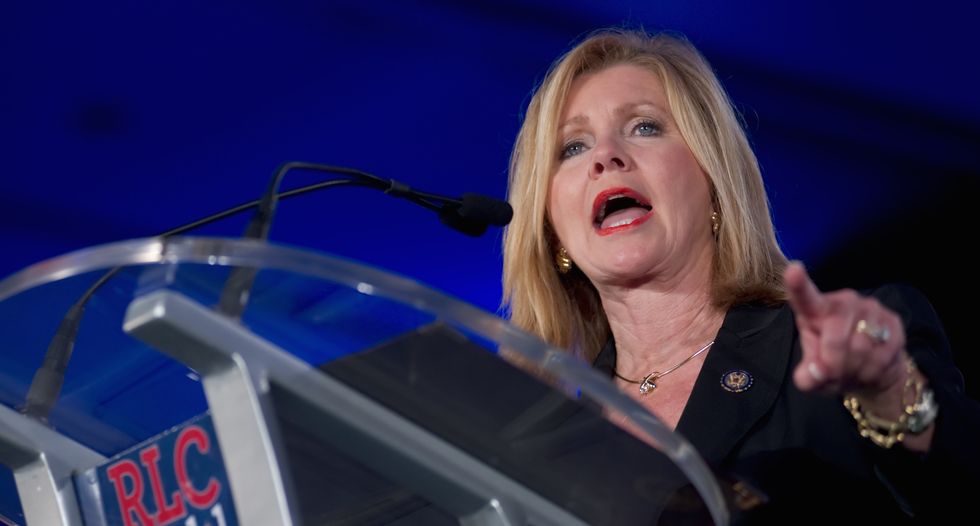 In a press conference at the South Carolina Freedom Summit -- hosted by Citizens United and Rep. Jeff Duncan (R-SC) -- Rep. Marsha Blackburn (R-TN) told reporters that Christians face persecution in the United States. But when a journalist pressed Blackburn for examples of Christian persecution on American soil, Blackburn could cite nary an example, the Huffington Post reports.

"Can you be specific about the instances in which you feel that Christians are being persecuted?" a reporter inquires of Blackburn.

"You know, there have been several lately. There've. Um. I can't give you a specific (pause) right off the cuff," Blackburn shrugs. "I'm sorry."

Then Blackburn smiles, turns away from the reporter, looks back toward the camera, and says, "Yeah. Thanks."

While religious persecution is not included among Blackburn's seven priority policy concerns on her website, the congresswoman does list the following issues: pro-life and family values, the second amendment, and "saving the incandescent lightbulb."

The Daily Caller notes that Blackburn has been a particularly effective advocate against efforts by "the Obama administration... to regulate our ceiling fans after attacking light bulbs and wood stoves." The conservative news site quotes Blackburn as saying: “Just like stretching their tentacles into light bulbs and so many other areas of our home, what they are doing is pricing people out of the ceiling fan market."

Watch Marsha Blackburn warn of Christian persecution in America -- and then fail to conjure up an example of how and where that is happening in the United States: