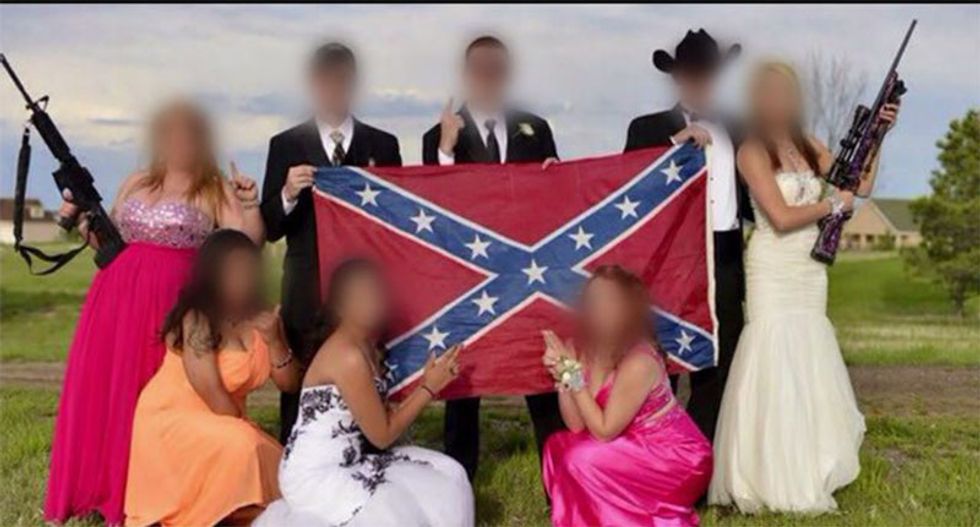 The controversial picture was taken before Chaparral High School's prom on Saturday, in which a group of students, dressed in evening gowns and tuxes, pose with assault rifles and a Confederate flag.

After the picture was circulated on social media, many students and parents in the community were shocked.

"If you're going to take a picture of a flag, you need to know what it stands for. You need to know that people are going to be offended by it," said Mairenn Digeorge, a student at University of Colorado-Boulder, who saw the picture on her Facebook feed.

The mother of one of the students posing in the picture is among those who are offended. “When he got out there he was surprised that guns were brought out and the Confederate flag was brought out,” she said in an interview with FOX31 Denver where her anonymity was maintained for fear of her son's safety. “There were other parents there fully supporting it and taking pictures.”

The student’s mother said she didn't condone the behavior and that her son made a mistake. According to her, the picture was taken at a home in Elizabeth.

“I think in their immaturity they kind of think it is a cowboy thing, but to have parents feed into it and support it is really upsetting to me,” she said.

University of Colorado-Boulder ethnic studies professor Arturo Aldama issued a statement. “The image is pretty disturbing, especially if they have real assault rifles in their hands," she said in the statement. "Not to mention, the Confederate flag and its legacy of white supremacy, Klan violence and the Jim Crow South.”