'Help Spread the Word of White Revival:' KKK sponsors another billboard in Arkansas 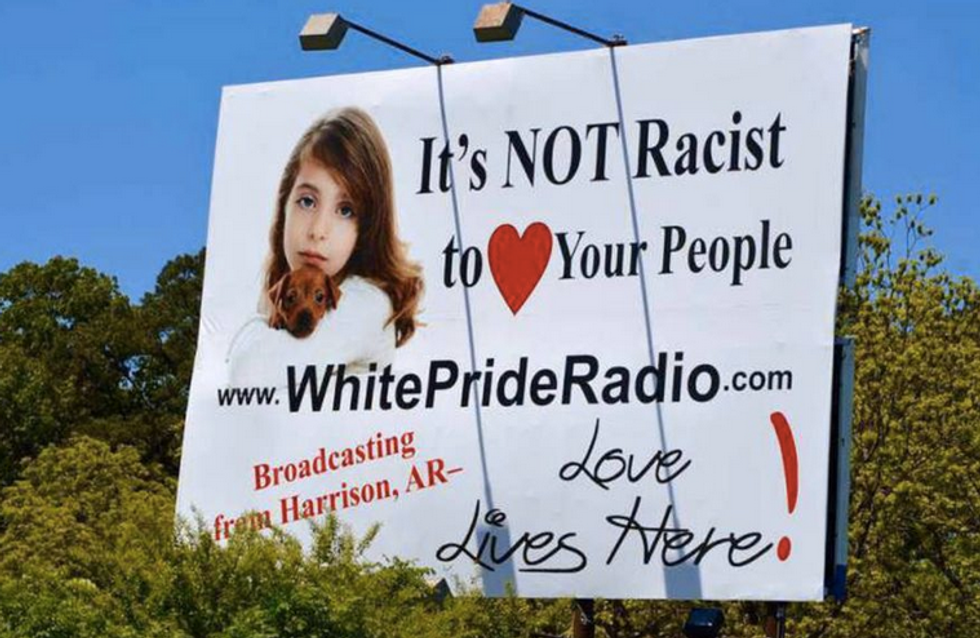 The Ku Klux Klan paid to put up a billboard in Russellville, Arkansas that reads "It's Not Racist To ♥ Your Own People." The sign features an image of a young white girl holding a puppy and a link to whiteprideradio.com.

If you go the website advertised on the billboard, it redirects you to a site called KKKradio.com, "The NEVER Ending VOICE of White Christian Revival!" As of this writing, the words "Help Spread the Word of White Revival by Donating to the Billboard project!" are written in colorful letters at the top of the site's front page. You can click on them. They're hyperlinked. And if you do, you'll see an image of a billboard very similar to the one recently erected in Russellville, and the opportunity to make a donation to "the Knights Party."

According to the Southern Poverty Law Center, the Knights Party is another name for the Ku Klux Klan.

In its "About" section, the white supremacist media outlet explains that, while "a lot of people recognize that there is an ongoing program of genocide against white people," there just isn't enough good radio programming out there to document it in a family-friendly way. "There are a lot of podcasts online from many different sources," KKKradio explains, "there just isn’t something that includes the entire family and we feel that is a shame."

"We are also pleased to present a wide range of music and a nice selection of Old Timey Radio programs – the kind that the family used to sit around and listen to in the evening," KKKradio continues. "These are free of race mixing themes and the exploits of homosexuals – the kind of entertainment that is popular on television today – even on so-called “family” networks like ABC Family."

"Be sure to listen with your family," the site advises. "Everyday, your small children will enjoy listening to, 'Stories from Grandma.' These are all racially sound stories they will love."

Shows listed on KKKradio's weekly schedule include: White Women's Perspective, the White Side, This Is the Klan, Christian Revival Center Classics, and Praise Music for All Ages.

Thomas Robb, the Southern Poverty Law Center notes, "is an Arkansas-based Christian Identity pastor and head of the Knights of the Ku Klux Klan, which he took over in the 1980s after the departure of David Duke."

In its online profile of Robb, the Southern Poverty Law Center alerts readers to the pastor's history of writing really racist things, offering the following quotes as evidence:

"When the Negro was under the natural discipline of white authority, white people were safe from the abuse and violence of the Negro, but the Negro was also safe from himself." - Editorial in The Torch, April 1990

On May 1, Russellville Mayor Randy Horton released a statement distancing his city -- and himself -- from the controversial billboard:

"The implication of this content, in my opinion," the mayor writes, "inaccurately depict the sentiments of the overwhelming majority of the citizens in Russellville. To my knowledge no member of the City Council has ever expressed thoughts that support this message. No employee of the City, nor any one in any civic or other group, church or circle of contacts has ever made an expression that makes me believe that they would sympathize with this idea. I just don’t believe it is in any way indicative of the beliefs of the majority of Russellville residents."

Horton adds: "Due to First Amendment protections the City has no control or oversight of the content of private advertising. But we can condemn intolerant, divisive, racist thoughts. As the Mayor of Russellville, I hereby do so."

Bill Eaton, an alderman representing Russellville's Ward 2 and the city's former mayor, issued a press release of his own, invoking the Nazis:

“I totally support Mayor Horton and his comments and belief regarding this unfortunate action. If I may paraphrase Winston Churchill’s comments leading up to World War II that he so aptly put regarding the ideology of Adolph Hitler as he was rising in power in Germany, Churchill said, ‘What is the sense of being against a man simply because of his birth? How can any man help how he is born?’ Churchill had it pegged. He had identified the evil of Nazi ideology and called it what it was — evil. The senseless statement by outsiders from our wonderful city is truly disappointing and immoral and requires rebuttal."

The arrival of a KKK billboard in Russellville, Arkansas comes at an inconvenient time, Horton tells the Courier News. According to the paper, a lot of people are visiting Russellville right now from out of town for several big deal events, "ranging from a country concert to Balloons Over RussVegas."

“Pitiful, pitiful,” Horton says. “Obviously, this was brought here by somebody outside our city. If you drive 25 miles in each direction, there’s no telling how many vacant billboards you can find.”

KKKradio, the organization that paid to put up the racist sign now embarrassing the town of Russellville, says on its website that it "[broadcasts] 24 hours a day, 7 days a week from Harrison, Arkansas USA in the beautiful Ozark Mountains."

According to Google Maps, Harrison is about 85.4 miles from Russellville -- a one hour and 49 minute driving distance "without traffic."

"A representative from a sign company based in Harrison said Friday they could not answer who leased the billboard, for how long or at what cost," the Courier News reports.

KKKradio was behind a nearly identical sign in Harrison, Arkansas earlier this year.