Hillary Clinton singles out immigration as a key 2016 campaign issue 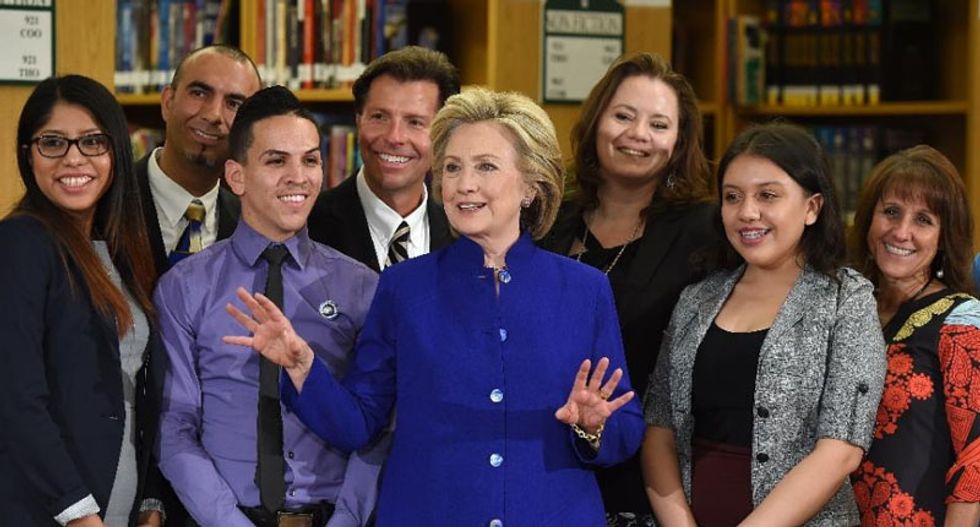 The 11 million undocumented immigrants in the United States don't vote, but they have children, siblings or cousins who do, and Hillary Clinton is courting their support.

The Democratic presidential candidate has singled out immigration as a key campaign issue in her bid for the White House in 2016.

She is looking to set herself apart from her Republican rivals on the matter, and has even said she wants to go further than President Barack Obama to secure legal status, and citizenship, for millions of undocumented immigrants, most of whom are Hispanic.

The move is a strategic one: securing the Hispanic vote could be what Clinton -- or any candidate -- needs to become president in the next election.

In recent elections, they have shown an increasing preference for the Democratic Party. Obama won the 2012 race with 82 percent of the minority vote, including 71 percent of the Hispanic vote.

Sitting with a group of undocumented students this week in Nevada, Clinton made her stance clear, calling on Congress to adopt comprehensive immigration reform and create a path to citizenship for the youths and millions of others like them.

She promised to do more than Obama, who used executive action last November to bypass Congress and approve measures to protect about four million undocumented foreigners from deportation. Clinton said she was ready to use executive action to shield many more.

Republicans immediately zeroed in on this to attack Clinton as a hyper-partisan Democrat.

"She is running even further to the left than Barack Obama," Whit Ayres, Republican pollster and adviser to conservative presidential hopeful Marco Rubio, told AFP.

"Executive actions on immigration are exactly the wrong way to solve a broken immigration system. If anything we need more bipartisan approaches to addressing a broken system, not declarations of unilateral action," said Ayres.

Clinton's stance will matter even more in states with a large Hispanic population, such as Nevada and Florida.

But Republican rivals hope the move will come back to bite her.

"This is just one more issue that she's going to have to answer for in the general election," Glen Bolger, Republican pollster and co-founder of Public Opinion Strategies, told AFP.

"If Republicans started to do major policymaking by executive action, the Democrats would be howling for impeachment," Bolger said.

However, Republican presidential candidates are aware they cannot ignore the immigration question, a key issue for Hispanic voters.

Ayres predicts that Republicans will need much more than 40 percent of the Hispanic vote in next year's election to win, a substantial hike from the 27 percent that Republican candidate Mitt Romney clinched in 2012.

Republicans focus on a precondition for reform, that the long border with Mexico should be better secured. Texas Senator Ted Cruz, the first to join the 2016 White House race, once proposed to triple the number of police along the border.

But none has offered any kind of substantive plan on immigration reform.

Rubio, the Florida Senator whose parents immigrated from Cuba, has previously supported comprehensive immigration reform but has since backpedaled.

He acknowledges that 11 million people cannot simply be deported, but now insists on securing the border first, indefinitely delaying any action on legal status.

He prefers to talk about legal immigration, and has proposed reducing family-based immigration, removing the sibling category preference, to increase the number of permanent visas for skilled immigrants.

But Bush, whose wife was born in Mexico, has adopted a more compassionate tone to discuss the lives of immigrants who take risks to cross the border.

"We're going to turn people into Republicans if we're much more aspirational in our message, and our tone has to be more inclusive as well," he said last month.

But Hispanic hopes, at least for the moment, seem to remain in the Democrats' camp.

Asked by Pew in 2014 "which party do you think has more concern for Hispanics/Latinos?", half of the Hispanic respondents said Democrats.

Only 10 percent thought Republicans cared more, and 35 percent said there was no difference between the parties.