Houston submerged as wild weather kills 20 in US and Mexico 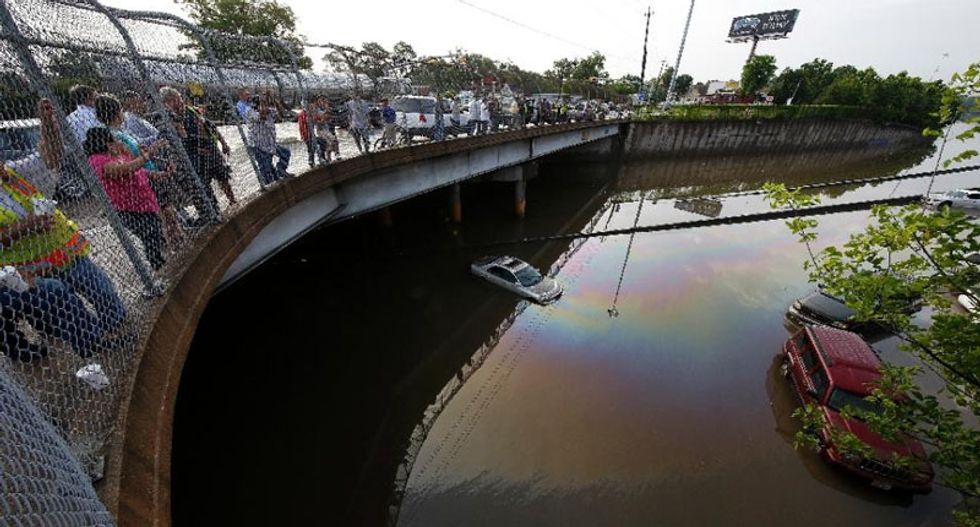 The southern US states of Texas and Oklahoma, and far northern Mexico, have borne the brunt of several days of wild weather, including tornadoes, which have destroyed homes, seen rivers swell to record levels and left cars submerged on highways (AFP Photo/Aaron M. Sprecher)

Torrential rain left large parts of Houston submerged Tuesday and trapped fans at an NBA basketball game, in savage weather that has killed nearly 20 people in the United States and Mexico.

The southern US states of Texas and Oklahoma, and northern Mexico, have borne the brunt of several days of wild weather, including tornadoes, which have left scores dead, missing and injured on both sides of the border.

More than 10 inches (25 centimeters) of heavy rain fell in just a few hours in the Texas city of Houston, triggering the worst flooding there in at least a decade and stranding at an arena a Houston Rockets player and spectators who had gone to see the basketball team Monday night.

Hundreds of vehicles, some fully under water, were abandoned on Houston's roads. Some people were trapped in their cars, others marooned in their homes.

Two people died overnight in the flooding in the city, Mayor Annise Parker said, with the toll expected to rise.

"I want to ask and urge people to continue to be safe and recognize that we may have more rain later today," she said, encouraging people to stay at home in America's fourth-largest city by population.

"We have cars littered all over the city," she told a press conference, adding that emergency crews were attempting to reach the abandoned vehicles to see if anyone had been trapped inside.

Downtown Houston, where the Toyota Center arena is located, was not under water, said Parker, but about 200 fans had been unable to get home from the NBA game for several hours after the deluge.

At least one Rockets player, center Dwight Howard, was also among those stranded into the night after learning of the treacherous road conditions.

"There's no need to try to push it," the Houston Chronicle reported him as saying.

"I don't think it's smart for anybody to try to be out in this weather."

One person was already confirmed dead there and two more died in Oklahoma, which is located to the north of Texas.

Many of the dozen missing in Hays County were from one house that was torn from its foundations during a flash flood over the weekend.

There were two families staying at the A-frame house in the picturesque town of Wimberley for the long Memorial Day weekend, NBC News reported. Among them were three children.

Inside was Laura McComb, who was on the phone with her sister when the house, built on stilts, broke off and was swept away.

"We are in a house that is now floating down the river," she reportedly told her sister, Julie Shields. "Call Mom and Dad. I love you. And pray."

Shields told the NBC affiliate KXAN that the phone call ended when McComb thought she saw a light from a helicopter that had come to rescue them.

She has not been heard from since Saturday night.

A savage twister roared through the Mexican border city of Ciudad Acuna at dawn Monday, killing at least 13 people and flattening hundreds of homes in a deadly six-second blast of carnage, officials said.

Rescuers were scrambling to find a baby that was ripped from his parents by the tornado's 270-300 kilometer-per-hour (168-186 miles) winds.

"The baby was with his parents, who were catapulted by the tornado and we can't find the infant," Mayor Evaristo Lenin Perez said.

"It was horrible. It started raining in the morning. Very early, the wind came and everything started to fly around and then it all fell to the ground," Ciudad Acuna resident Juanita Perez said tearfully.