How to live a middle-class life in New York City on less than $5,000 a year 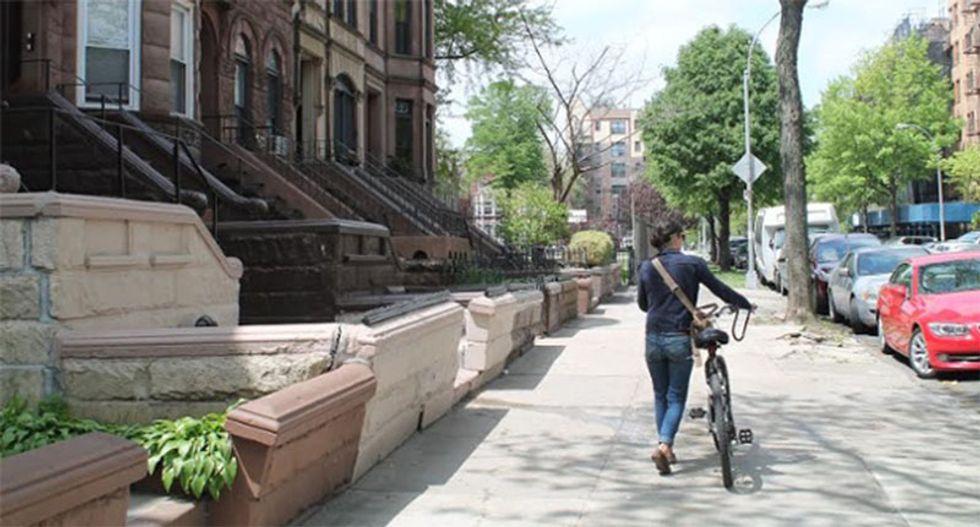 Marie the freegan Frenchwoman, on patrol in Brooklyn. (The Guardian/Pauline Bock)

Marie was mixing basil for pesto on the kitchen counter of a brownstone in the Crown Heights neighborhood of Brooklyn when the doorbell rang. Her friend Janet Kalish was early for lunch: the butternut squash was still cooking. “I found kilos of carrots yesterday,” Kalish said joyfully. “I have to give them away before they turn bad!”

Kalish had collected the carrots on the street, just like the parmesan Marie was grating had been rescued from the trash. The pair became friends when Marie started dumpster diving three years ago.

Drifting from the American philosophy of incessant consumption, some have adapted to a system of interdependence and sharing – and eating for free is just the first step.

Marie lives a New York middle-class life spending less than $5,000 a year. Kalish, who travels more, needs $10,000. They work, eat, have a home, but there’s no rent bill or grocery shopping. No regular salary, even. Money isn’t their currency.

Marie is a petite, black-haired French woman who looks just like the conventional fortysomething Brooklynite. But she has no job, no visa, and lives in a three-story house for free. Living in the US also comes with an additional bit of daring: she’s an illegal immigrant. For privacy reasons, she asked to be identified with her first name only.

Eight years ago Marie arrived in the US, where she decided to remain. She has been staying for five years with her friend Greg, a real estate agent. They met in upstate New York in 2010 at a permaculture internship in which Marie spent a month learning how to farm sustainably. She needed a place to stay, he had a vacant room, so she became his home keeper, cleaning, gardening and bringing dumpster-dived food in lieu of rent.

“I count my blessings,” she said. “I’ve always tried to make it work fairly, to bring food in exchange. But it’s important that I never planned it this way. I didn’t leave France thinking ‘I’ll be illegal’; I didn’t move to Greg’s thinking I’d stay long for free.

In May 2007, Marie landed at JFK airport with a Lonely Planet in her backpack. It was her first time in the US; emerging from the subway at 125th Street and Lenox Avenue in Harlem made her think of Starsky and Hutch, the 1970s television show. She paid rent in cash in Harlem, working as a waiter for three years, before moving to Greg’s.

Going with the flow, Marie has now decided to go back to France. In June she will book a plane ticket and ask to be deported.

“I’m aware that being French, and not Latino for example, makes things easier,” she said. Since she will leave prior to deportation, the main consequence of her overstay will be a ban from re-entering the US for 10 years.

The price of the ticket may be more than she has spent in the past several months combined: a few hundred dollars. She receives rent from a house she owns in France, but that’s money she never uses. She lives on cash from baby- and dog-sitting. The $1,000 she recently was paid for painting a house “can go a long way”. Her clothes are finds and she travels by bike, even from Crown Heights to Manhattan.

Sometimes she books cheap opera tickets: she saw Don Giovanni at the Met in March. For $15 a month, she’s on Greg’s family cellphone plan. When she dumpster-dives, she can bring $60 worth of food home in a night. “Marie’s the most earth-friendly person I know,” said her landlord Greg. “She doesn’t own a car, wears only used clothes, fixes broken things. She fills holes in the system and leaves zero footprint.”

Back in France, Marie worked as an accountant. “I had buried my head in the sand, convincing myself that was life. But that just wasn’t what I wanted, counting others’ money. I’m still not sure what I want.”

Three or four times a week in warmer months, Marie bicycles through Park Slope. She knows supermarkets put out trash between 8-9pm. Food Train, at 7th Avenue and 11th Street, is “good for fresh fruits”, and Union Market throws away unexpired, sealed Tuscan bean soups, fresh cheese raviolis and raw kale salads every day – they clean the shelves for newer ones, she explains.

A dynamic, chestnut-haired woman and a freegan since 2004, Kalish, 52, saves all items from the trash and tries not to purchase anything but cat food and toilet paper.

Kalish quit her high school teaching job in 2013 and lives off the income she has saved for a decade. Owning her Richmond Hills flat and a house in Westchester, she receives rent and will get her pension in three years. But all of this she rarely spends. “There’s nothing wrong with savings,” she said. “People who accumulate expensive things are eternally dissatisfied.”

She brings many of her finds to the food pantry where she volunteers. “I still work a lot. It’s just not for money,” she says. Kalish argues freegans will exist as long as there will be food waste. (The United Nations Environment Programme reports that 40% of food supplies goes to the trash every year in the US – that’s 20lb of food per person every month.)

“We receive plenty of criticism – that we take advantage of the society, that we are elitist even,” she said. “But we’re trying to be sustainable.”

For a time, Kalish wouldn’t go home after a trash tour without giving someone else food. She doesn’t do it any more; a homeless woman once screamed at her when she learned the food came from the trash. “I realized she knew where to find it,” Kalish said. “She just didn’t want to.”

Marie doesn’t know what she will do back in France, only that she won’t stop dumpster diving. Friends who own a farm could hire her, or she could go work on a barge on the Bourgogne canal. She’s dreaming of walking the Route to Santiago de Compostela this summer.

“Pilgrims lived a very modest life and were offered hospitality on the road,” Marie said. “Somehow I’m the same.”

The Middleton's, from Forestburg TX, are accused of having made a couple's activity out of assaulting officers on the front line of the Capitol insurrection. Here's some of the description from the FBI complaint, citing footage from police body cams: