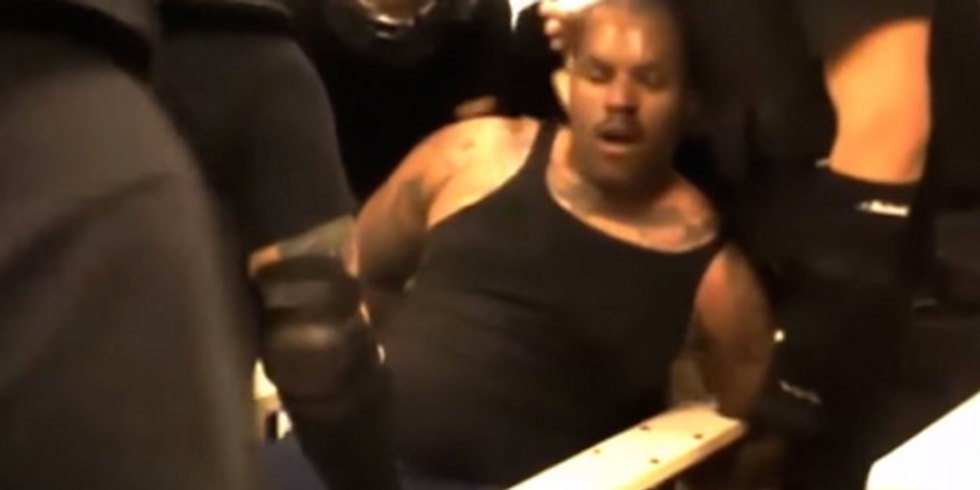 James Brown served two tours in Iraq and was diagnosed with PTSD. In exchange for his service and sacrifice, the 26-year-old father of two died in a Texas jail, where prison guards in riot gear stormed his cell and ignored his cries that he was choking on his own blood and unable to breathe.

James Brown, who reported to an El Paso jail where he was supposed to serve a two-day sentence for driving while intoxicated, died in 2012. While his family suspected foul play, only recently was the local news station KFOX14 able to obtain video recorded by one of the prison guards. The footage, which is extremely disturbing and painful to watch, shows that Brown has started bleeding for unknown reasons. When he doesn't respond to the prison guard, as many as five guards dressed in riot gear storm Brown's cell, forcing him to the ground. At no point does Brown appear to be resisting the guards. He does, however, state repeatedly, "I can't breathe" and, "I'm choking on my blood."  He's then taken to the infirmary, where he has a mask placed over his face and is given an injection. He continues to state he can't breathe and, as evident in this exchange, is denied all requests to change his position or have the mask removed:

SGT. JAMES BROWN: Now that’s blocking too much air. That’s over my nose and my mouth. Could you unhook my arm out of this?

PRISON GUARD: You need to calm down first.

SGT. JAMES BROWN: Can I lay on the floor?

SGT. JAMES BROWN: Well, you’re going to have to do one or the other to help my breathing. Please, that’s all I ask.

PRISON GUARD: You got to calm down a little bit first.

SGT. JAMES BROWN: I will. I just need the mask—please.

SGT. JAMES BROWN: Please. Please. I can’t breathe. I can’t relax. You’ve got to take this mask off, dude, please.

By the end of the video, Brown is left naked in his cell in a non-responsive state. He is not blinking and his breathing is shallow. No ambulance is called. Ultimately, Brown would be brought to a hospital and pronounced dead. The autopsy determined Brown died of natural causes and  cites "a sickle cell crisis" as the cause of his death.  The El Paso County Sherriff released the following statement to Democracy Now!

Mr. Brown’s death was an unfortunate tragedy. The Sheriff’s Office has conducted a thorough review of the facts surrounding Mr. Brown’s death and, based upon all the evidence obtained, determined that his death was caused by a pre-existing medical condition.

B.J. Crow, the family's attorney, is skeptical to say the least:

When a 26-year-old active military person checks in to jail for a court-imposed sentence on a Friday, and he leaves Sunday, you know, in a casket, something went horribly wrong there.... He was bleeding out the ears, the nose, the mouth. His kidneys shut down. His blood pressure dropped to a very dangerous level. And his liver shut down.

The tragic irony of Brown's death was not lost on his mother, Dinette Scott, who told Democray Now!

In that video, I heard my son begging for his life on U.S. soil. This was not his enemy that he was facing. This was a U.S. citizen that was treating him like he was an animal. And it should not be allowed. That should not happen to anyone in the United States

The family has filed a lawsuit against El Paso County.