'I love gays': See how this Oregon teen turned the tables on some hateful anti-LGBT protesters 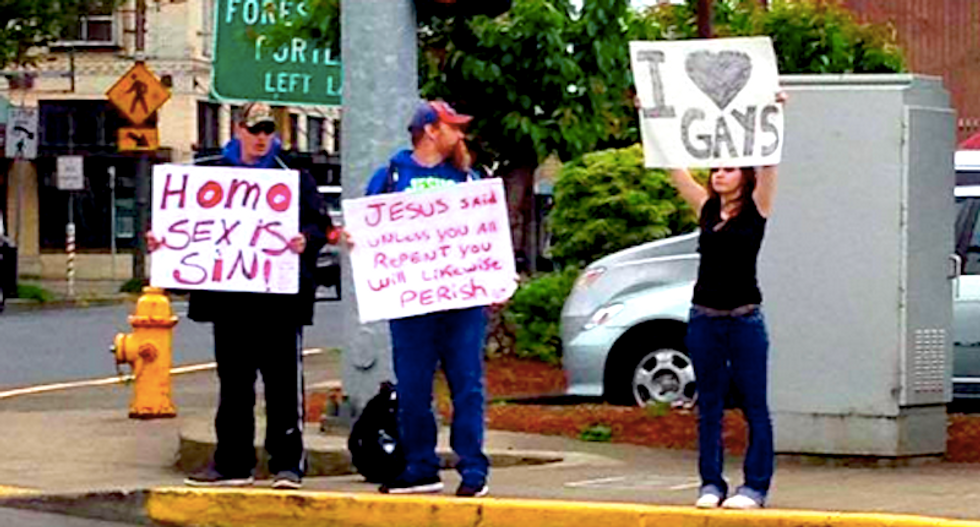 An Oregon woman decided to counter an anti-LGBT protest with a message of love – and she was joined by dozens of supporters, including several pastors.

Makaila Ragan grew fed up with two men carrying signs condemning homosexuality and shouting insults at passersby Tuesday outside the optometrist’s office where her mother works, so she made her own sign and stood beside them, reported the Tillamook County Pioneer.

“I was so irritated because I see them all around town, and all they ever do is make people feel like crap about themselves,” said Ragan, adding that her mom’s boss gave her permission to engage in a counter-protest outside Eyes of Oregon.

“They were totally all for it, so I made a sign that said, ‘I love gays,’” she told the website.

“They were calling me names, and asking my mom questions, like, ‘How many times did you have to get an abortion before you were able to have your daughter?’ and saying, ‘You’re going to burn in hell right along with your daughter,’” Ragan said. “The things they were saying were just awful, but I didn’t let them faze me.”

The teen said she was soon joined by supporters carrying signs, food, and flowers, and one man gave them money to buy refreshments.

Several pastors joined the group and told the anti-LGBT protesters that “everyone is loved by God,” the teen told the website.

Ragan and her supporters agreed to stay at the busiest intersection in Tillamook until the men left – and they remained there until the men packed up and left about 10:30 p.m.

The teen intends to return, and supporters launched a Facebook group to help organize more demonstrations.