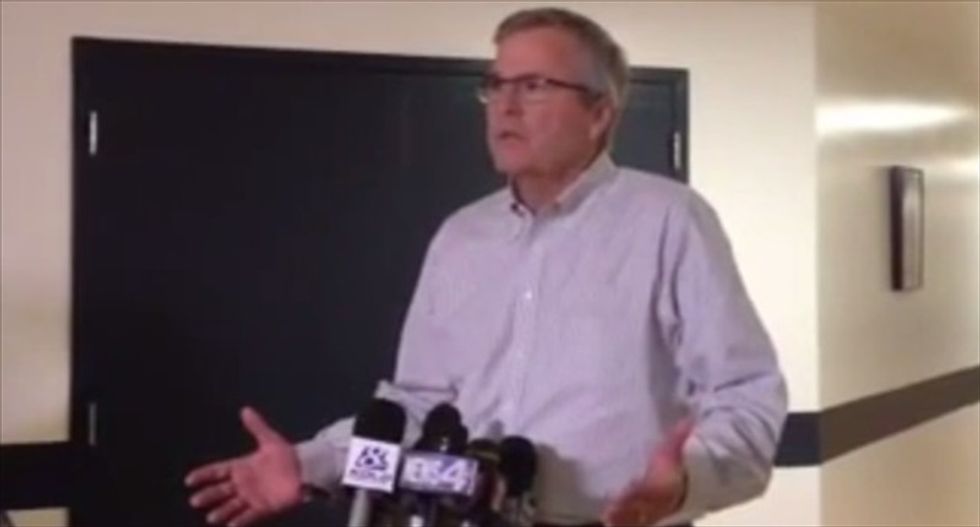 Republican Jeb Bush appears to have unintentionally announced his candidacy for president in 2016 in a conversation with reporters on Wednesday that was caught on video.

Speaking in Nevada, the former Florida governor seemed to acknowledge he was a candidate but right afterward indicated he had not made up his mind.

"I'm running for president in 2016, and the focus is going to be about how we, if I run, how do you create high sustained economic growth," Jeb Bush said.

He also made clear earlier in his exchange with reporters that he was not yet a candidate. "No, no I'm not an official candidate. I've been traveling the country for the last three months and making up my mind, trying to determine the support I may have should I go forward," he said.

A transcript of the exchange was provided by a Bush aide.

Bush announced in December that he would "actively explore" a run for the White House, but he has yet to formally declare he is running.

The difference between considering a run and actually jumping into the race affects what he can and cannot do under the law with regard to fundraising. Once candidates formally enter the presidential race they face tighter restrictions on raising money.

Bush has appeared at fundraisers across the country for Right to Rise, a political action committee that was created by Bush's legal team. If he were to declare he is running, he could still appear at the group's functions but would be prohibited from coordinating with it over messaging.

Larry Noble, senior counsel at the Campaign Legal Center, said his group has complained to federal election officials that Bush is running and should already be following rules for candidates' fundraising.

"He's going to say it was a slip of the tongue, but that's absolute nonsense at this point," Noble said.

Bush was responding on Wednesday to a question about what he would have done differently than his brother, former President George W. Bush. Jeb Bush has taken heat from some Republicans and Democrats this week over comments he made in a Fox News interview about his brother's decision to go to war in Iraq.

Bush said in the interview, which aired on Monday, that given the intelligence available at the time, he too would have authorized the invasion. On Tuesday, he said he misinterpreted the question and that the invasion was based on bad intelligence about weapons of mass destruction.

Other Republicans who are weighing presidential runs offered different takes.

Ohio Governor John Kasich told The Columbus Dispatch that, knowing the intelligence was wrong, he "wouldn't have seen it as vital to national interests" to launch the invasion.

Watch footage of Bush's remarks, as posted online on Wednesday, below.