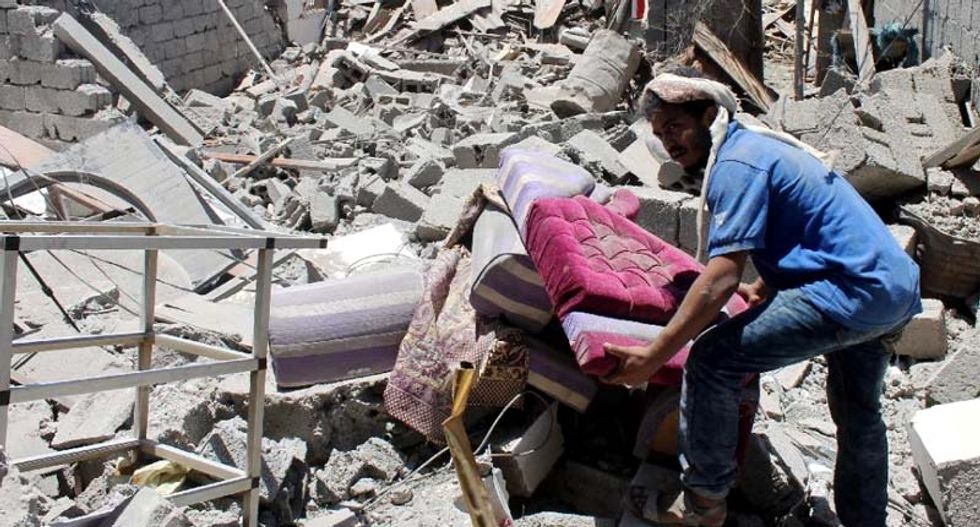 A Yemeni man searches for survivors under the rubble in houses destroyed by an overnight Saudi-led air strike on a residential area in the port city of Aden's Dar Saad suburb, on May 2, 2015 (AFP Photo/Saleh Al-Obeidi)

A senior Iranian commander warned the United States that a "fire might start" over an aid ship bound for Yemen Wednesday after the Pentagon called for it to change course.

Brigadier General Masoud Jazayeri said it was Iran's right to deliver relief supplies to Yemen as a humanitarian ceasefire takes hold and rejected Washington's request that they be taken instead to a United Nations aid hub to allay concerns they might be military.

"I should say frankly that Iran's restraint has a limit," Jazayeri, a deputy chief of staff, told Iran's Arab-language Al-Alam television late on Tuesday.

"Saudi Arabia and its novice rulers and the Americans and others should know if they continue to create obstacles on Iran's aid delivery a fire might start that would definitely be out of their control.

"My strict recommendation is that they let Iran and other countries deliver their humanitarian aid to Yemen and they stop this bloodshed against Muslims, in the name of Islam."

Sunni Saudi Arabia, which has called a temporary halt in the nearly seven week air war it has led against Shiite rebels in neighbouring Yemen, has repeatedly accused Iran of arming its coreligionists.

Both Iran and the rebels deny the allegation.

The Pentagon said on Tuesday that it was tracking the aid ship Iran Shahed after a naval commander told state media that Tehran would send warships to escort it to Yemen.

Spokesman Colonel Steven Warren called for the ship to divert to Djibouti, where the UN has set up an aid hub across the narrow strait that separates Yemen from the Horn of Africa, to prove that its cargo was humanitarian.

"The Iranians have stated that this is humanitarian aid," Warren told reporters in Washington.

"If that is the case, then we certainly encourage the Iranians to deliver that humanitarian aid to the United Nations humanitarian aid distribution hub, which has been established in Djibouti."

The Iranian Red Crescent has said the vessel is carrying 2,500 tonnes of humanitarian aid and has insisted that "no one has the right to inspect" it.

Iranian officials have said the ship is bound for the rebel-held port of Hodeida on Yemen's Red Sea coast and has 60 people on board.

They include seven anti-war activists from France, Germany and the United States, as well as 15 medical staff, 13 media representatives and 25 crew, according to Iranian media.

The standoff over the vessel raises the prospect of a potential confrontation between Washington and Tehran in the vital sea lane which links the Gulf and the Indian Ocean with the Mediterranean though the Suez Canal.