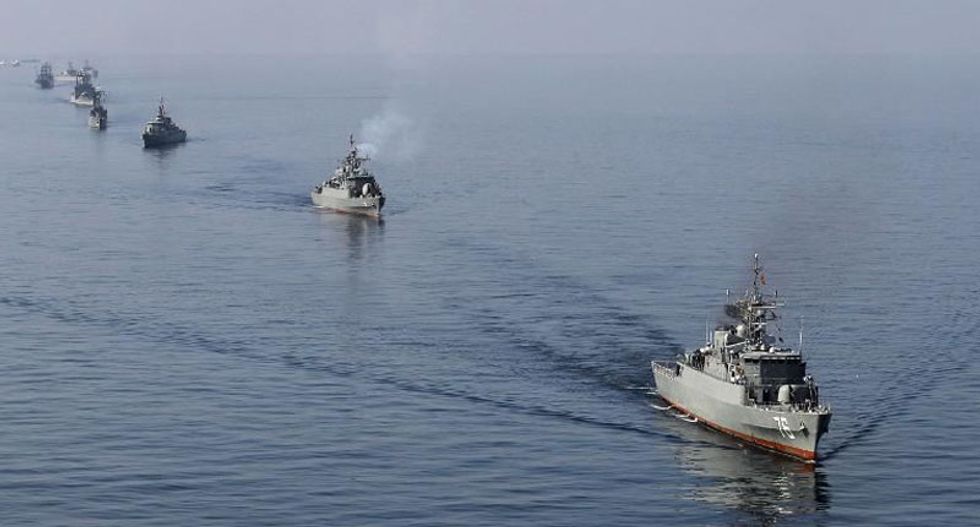 Iranian Revolutionary Guard forces fired warning shots at a Singapore-flagged commercial ship in the Gulf on Thursday, before vessels from the United Arab Emirates came to the ship's aid, US officials said.

The incident reflects rising tensions in the Gulf, fueled in part by the conflict in Yemen that pits Iranian-backed Shiite rebels in Yemen against pro-government forces supported by a Saudi-led coalition.

The Iranian patrol craft fired across the bow of the Alpine Eternity in international waters and the commercial ship then headed towards the UAE, two defense officials told AFP.

The Alpine Eternity issued a radio call for help to the UAE and the Iranian boats fired a second wave of warning shots, the officials said.

UAE authorities heard the radio call and deployed coast guard boats in response. The Iranian boats then departed the area, the officials said.

A US naval ship was about 20 miles (32 kilometers) away at the time but received no request for assistance, officials said. There were no American citizens aboard the commercial ship.

"We are aware of situation between a commercial vessel and Iranian patrol craft in international waters that occurred today," said an officer with US Central Command, which oversees forces in the Middle East.

Iran recently seized a Marshall Islands-flagged vessel in the Gulf and warned the United States not to interfere with an Iranian aid ship headed for Yemen. The commercial cargo ship was later released, after Iranian officials said a commercial dispute had been settled.

Following the seizure of the Marshall Islands-flagged vessel, the US Navy recently provided security for US-flagged commercial ships crossing through the Strait of Hormuz. But US commanders called it off after about a week, saying tensions had appeared to ease.

Another possible showdown emerged this week, however. The United States on Wednesday demanded that an Iranian aid ship bound for Yemen change course and head towards Djibouti, where the United Nations is overseeing humanitarian efforts for the Yemen conflict.

But a senior Iranian commander rejected the request and warned the Americans that "a fire might start" if there were attempts to block Tehran's aid efforts.

The Alpine Eternity is an oil-chemical tanker that had last stopped at a port in Bahrain, according to the marinetraffic.com shipping website. The ship is listed as part of the fleet of Transpetrol, a commercial shipping firm that transports oil and gas, with offices in Belgium, Bermuda, Norway and Switzerland.