Iraq prime minister rebuts Pentagon chief: 'He was fed with the wrong information' 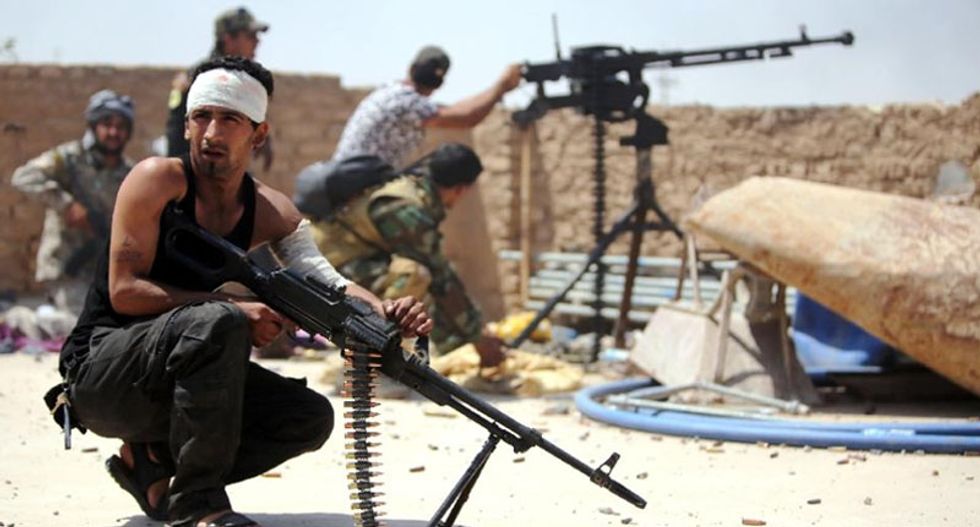 Iraqi fighters from a Shiite popular mobilisation unit hold position near the Baiji refinery north of Tikrit, during a joint operation with the Iraqi army against Islamic State (IS) jihadists (AFP Photo/Ahmad Al-Rubaye)

Iraq on Monday rejected accusations by the US defence chief that its security forces dodged battle in Ramadi and lack the will to fight the Islamic State group.

Pentagon chief Ashton Carter argued that the May 17 fall of Ramadi, the worst defeat Baghdad has suffered in almost a year, could have been avoided.

"We have an issue with the will of the Iraqis to fight ISIL and defend themselves," he told CNN on Sunday, using one of the acronyms of the jihadist group.

Washington has been one of Baghdad's key partners in the war to reclaim the ground lost to IS last year and Iraqi Prime Minister Haider al-Abadi expressed disbelief at Carter's stinging comments.

"I'm surprised why he said that. I mean, he was very supportive of Iraq. I am sure he was fed with the wrong information," Abadi told the BBC.

A senior Iranian general involved in the fight against IS hit out at Washington, saying it had failed to help Iraqi forces in Ramadi despite its military presence at the Al-Asad air base in the same province.

"How can you be in that country under the pretext of protecting the Iraqis and do nothing? This is no more than being an accomplice in a plot," said Qassem Suleimani, the Revolutionary Guards' commander of foreign operations.

Shiite Iran has military advisers in Iraq and Syria and provides financial and military support to the governments of both countries in their battle against Sunni extremists.

The loss of Ramadi, capital of Iraq's largest province Anbar, raised questions over the strategy adopted not only by Baghdad but also by Washington to tackle IS.

Months of air strikes and the deployment of advisers to reform and train the security forces have failed to keep up with IS's aggressive tactics.

Ali, a visiting senior fellow at the Education for Peace in Iraq Centre, argued there were several examples of Iraqi forces showing plenty of grit and cited the Baiji refinery, where elite troops have repelled relentless IS attacks for months.

"This lack of will the US defence secretary mentioned is how the enemies of Iraq have tried to depict the Iraqi security forces," he told AFP.

An Iraqi military commander in Anbar described Carter's comments as "a provocation to the Iraqi army and Iraqi people designed to make people lose their trust in the army."

The government has nonetheless admitted to shortcomings, vowing to investigate the chaotic retreat from Ramadi and punish "recalcitrant" fighters.

After a year of fighting and despite a string of territorial losses, the jihadists' will to fight, on the other hand, was never really in doubt.

IS is a trim fighting force which has time and again displayed great tactical skill and whose men see death on the battlefield as the ultimate reward.

Abadi and Washington had hoped to keep the Hashed and its Iranian-backed militia out of the Sunni stronghold of Anbar.

But the collapse of the security forces during the fall of Ramadi was seen by most as evidence that Baghdad could not afford to do without the Hashed's determination to fight and sheer numbers.

"It makes my heart bleed because we lost Ramadi but I can assure you we can bring it back soon," Abadi told the BBC.

Iraqi regular forces backed by the Hashed and Sunni tribal fighters from Anbar have begun clawing back land east of Ramadi over the past few days.

Abadi said a major counteroffensive in Anbar would be launched in a matter of days.

The capture of Ramadi together with the IS takeover of Palmyra in eastern Syria last week has consolidated the jihadists' grip on the heart of their self-proclaimed caliphate.

IS jihadists in different parts of Syria's Homs province have executed 67 civilians and 150 members of regime forces since May 16, according to the Syrian Observatory for Human Rights.

Observatory director Rami Abdel Rahman said whole families had been executed, including children with their parents, after Syrian state media said IS had carried out a "massacre" in Palmyra, slaughtering some 400 civilians.

Syrian regime aircraft launched at least 15 strikes in and around Palymra on Monday, the Britain-based monitor reported.

It said at least four civilians had been killed in the raids, which were the most intense since the jihadists overran the city on Thursday.

'Would you take a bullet for us?' Controversial shooter drills questioned by students and teachers

The Oxford High School school shooting in Michigan on Tuesday was the latest string of campus violence involving an active shooter resulting in a tragic loss of life -- four students this time.

Prior to this week's carnage, Oxford students regularly participated in an active shooter drill known as ALICE -- “alert, lockdown, inform, counter and evacuate" -- but the massacre calls into question whether the training actually works.

Meghan Markle on Thursday won a second court victory against a British newspaper group, as judges threw out the publisher's appeal against a ruling that it breached her privacy.

The Duchess of Sussex said she hoped the ruling would embolden others to hold tabloid newspapers to account and provoke reform.