Is it a UFO? Sun halo sparks fear and jokes in Mexico 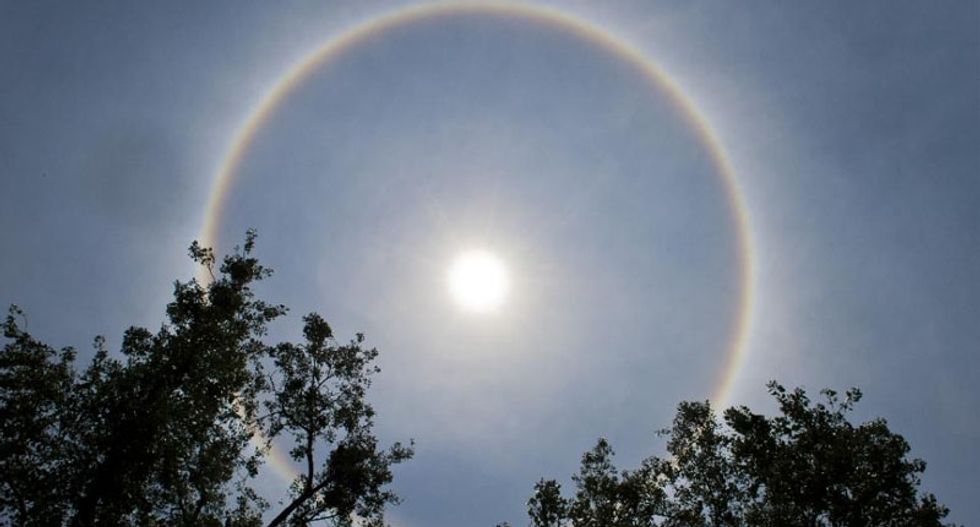 A halo around the sun is seen in the sky above Mexico City on May 21, 2015 (AFP Photo/Omar Torres)

Was it a UFO? A sign that the end is nigh?

A rainbow-like halo surrounded the sun over Mexico City on Thursday, an optical phenomenon that triggered a social media frenzy of pictures and jokes about the end of the world.

Some weren't so amused.

"I have received some 30 phone calls from people who are scared and think that it's a bad omen, others think it means it will rain more than expected," the coordinator of the National Weather Service, Juan Manuel Caballero, told AFP.

"I've had to repeat several times: 'No, it doesn't hurt if you don't look at it directly," Caballero sighed.

But his science-based reassurances had no effect on many Chilangos -- as the capital's residents are known -- who had a field day on social media.

"The aliens have finally arrived! Prepare the sandwiches for the trip!" someone wrote on Facebook.

Others quipped that it was a government conspiracy to blind voters ahead of June 7 mid-term polls, with one Twitter user saying: "A sun halo days before elections. Coincidence? I don't believe it."

Scientists have a better explanation: Sun halos happen when sunlight passes through ice crystals, bending the light and creating the colorful ring.

"It's very common. The thing is that people never look up," Caballero said.